What are my current HDD Partitions

I am new in using Linux, and by new, I mean really new. I am trying to get the hang on how things work in this platform, but I can't seem to manage to understand the following: 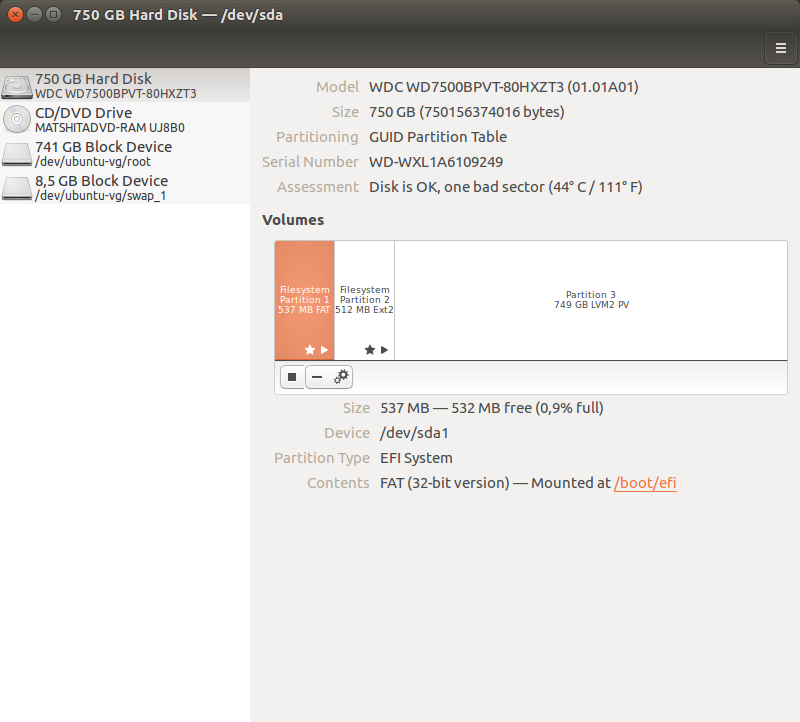 What I can't put my finger on is - what are those block devices? I have one HDD which has the capacity of 750 GB (which I assume is the 1st device on the picture), but what about the ones below my optical drive?

Also I would like to know where exactly is Ubuntu installed, and how much space does it take?

One last question more on the side note - what is the easiest way to fully format my HDD, and define different partitions? Is it via the Ubuntu Installation, or is there a more faster way?

I apologize in advance for my question, but like I said - I am trying to get the hang of things around here.

Both of these LVM partitions are inside a "group" known as ubuntu-vg, which has its block devices exposed to you as entities under /dev/ubuntu-vg.

In addition to your LVM system, your hard drive has two more partitions. Both of these partitions relate to how your system boots and initially starts up. The first (FAT) partition is known as the EFI System Partition (mounted at /boot/efi) and contains EFI instructions read by your BIOS. The second (Ext2) partition is your /boot path, which manages GRUB and every step in your computer's boot chain after the EFI has handed off control to GRUB.

If we were to expand your hard drive into a tree view, it would look something like this:

As you can see, LVM is sort of a "disk within a disk," and it's best to think of it this way.

If you want to full-format your hard drive and re-install Linux, you can do this by following our guide to installing Ubuntu. However, if you'd rather a more traditional partition scheme, be sure to not check the option for LVM.

I would personally advise you to continue using LVM, as it has a number of very powerful benefits and features (see link at top) that may be of great use to most users. After getting through the initial learning curve for it, it becomes and indispensable tool.

You have set up LVM - Logical Volume Management.

This means 750 GB Hard Disk (WDC WD7500...) is your physical hard disk.
It contains 3 partitions, a small (573 MB) EFI partition, another small (512 MB) partition which is probably (can't see it in your screenshot) mounted as /boot and holds your GRUB boot loader files and kernels etc, and a huge (749 GB) LVM container partition.

The LVM container partition itself contains now multiple virtual volumes that store your actual data. Those virtual volumes are shown in your sidebar above as 741 GB Block Device (/dev/ubuntu-vg/root) and 8.5 GB Block Device (/dev/ubuntu-vg/swap_1). The first, big one holds your Ubuntu's file system root / and all contained data, while the second, smaller one is used as swap partition.

Not the answer you're looking for? Browse other questions tagged partitioning hard-drive or ask your own question.