How does Nautilus decide which icon to use?

This is the sidebar of my nautilus window. You can see two different icons - one for the USB sticks and one for drives. 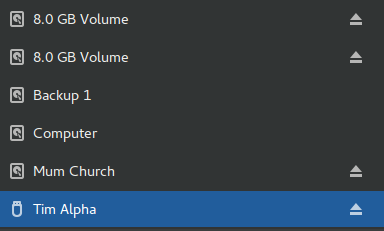 Gio has set of classes which allow applications to read available drives and volumes, and what icons are associated to them (and that's something API already handles). The icons are returned as Gio Icon type, so applications don't particularly have to know where the icon is located, however requesting an icon by name or by full path is always possible. There's two types of icons you will see, "symbolic" and custom, and "symbolic" icons are sort of standard. If one looks through /usr/share/icons they'll find there are lots of icons that end with -symbolic in their name, stored across multiple theme folders (standard Adwaita, Humanity, and Oxygen are good examples) , typically .svg files. In the screenshot in the question, the icon for hard drive is drive-harddisk-symbolic and drive-removable-media-usb. When user switches desktop theme, the application doesn't have to look up full path to the icon - so long as there is drive-harddisk-symbolic icon in the theme folder, the Gio will find it and return to the application. How do I know all this ? I've used those same icons for my own UDisks Indicator (though my approach differs from what Nautilus does).

Lengthy explanation and probably looks simpler in a diagram, but also that's all written in C. Let's try to make something ourselves in Python which is by far simpler and easier.

Here's a simple window that utilizes Gio's Drive interface to create buttons with icons corresponding to the attached drives. This is overly simplistic and needs polish, and inline-comments

Of course nowadays you don't have to reinvent the wheel. Gtk provides PlacesSidebar widget.

Sidenote: Nautilus also has a header file nautilus-icon-names.h which defines constants with NAUTILUS_ prefix, such as

probably for developer/code consistency, instead of having to rely on looking up actual icon names. The only place where that particular definition is used is in get_icon function, and that function ironically is not used for Places side bar but is used inside pathbar updating function. Go figure,right ? ¯\_(ツ)_/¯

6
Where is Nautilus icon file located and how is it chosen?
8
Distance between folders inside "Icon view" mode (Nautilus)
5
Nautilus Icon not showing window indicators
10
How to bring back my Desktop Icon in Nautilus?
0
Remove Old Nautilus Icon