i have a problem with my intuos draw pen tablet buttons, it's a model ctl-490, it has 4 buttons on the pad, two on the left and two on the right and 3 on the stylus (two buttons by a side and one more if we count tapping as a button)

My problem is with the pad buttons, when i open this screenon the wacom settings to map them the buttons are in the wrong order. 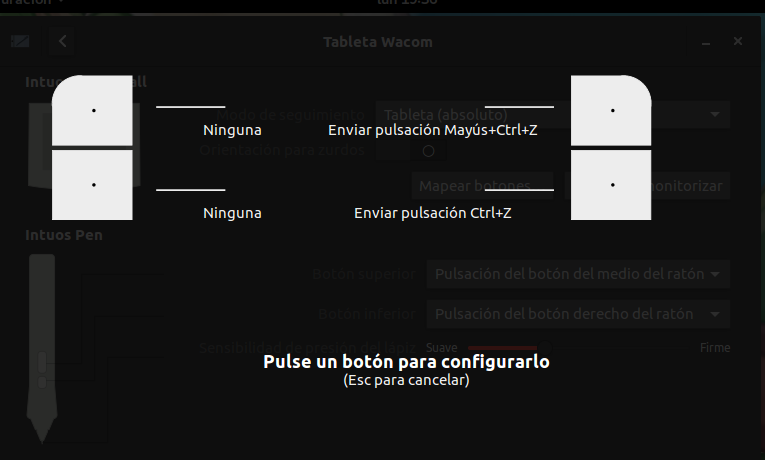 I have o clue of how to fix this and although i don't really need them to draw on krita, i do find them usefull to do some quick editing and moving the canvas.

I use the Ubuntu Gnome 16.10 LTS distribution by the way.

If i'm allowed i would also like to ask a few extra question:

Can one of the buttons on the stylus be set to scroll(both up and down or even left and right)?

Are there other tools to configure wacom tablets apart from the one from out-of-the-box? Are they better or worst?

Please use xsetwacom to map your ExpressKeys.

Where "Wacom Bamboo Pad pad" is the name of your tablet obtained with:

Not the answer you're looking for? Browse other questions tagged drivers hardware settings tablet wacom or ask your own question.

7
How can I configure the express keys for my Intuos drawing tablet?
1
WACOM INTUOS CTH-680 doesn't work out of the box on Ubuntu 14.4
2
Wacom button and mouse button setting
2
wacom tablet intuos DRAW ( CTL-490 ) FAR not work perfectly
1
Wacom Intuos S 2 button mapping problems
0
Ubuntu 16.04.2 LTS - unable to configure Wacom Intuos Comic (CTH-490)
0
How do you configure the top left and right buttons of a Wacom?
2
Get a Wacom Intuos CTL-490 Working in Ubuntu Crouton?
0
How can I use a wacom intuos graphics tablet and mouse simultaneously?