Warning: Moving a partition might cause your operating system to fail to boot

16.04 is installed alongside Windows. I will free space for 16.04 by shrinking the Windows partition. I understand that it is necessary to boot from a CD \ USB and use a tool like partimage to reallocate disk space.

When resizing the 16.04 partition gParted provided a warning:

Results include 16.04 indicating in the file manager that there is now 25GB (previously 13GB).

More information on the original state is documented (click here)

The Windows partition was shrunk with the diskmgmt.msc console.. gParted was used to resize (expand) the Ubuntu partition: originally 13GB. 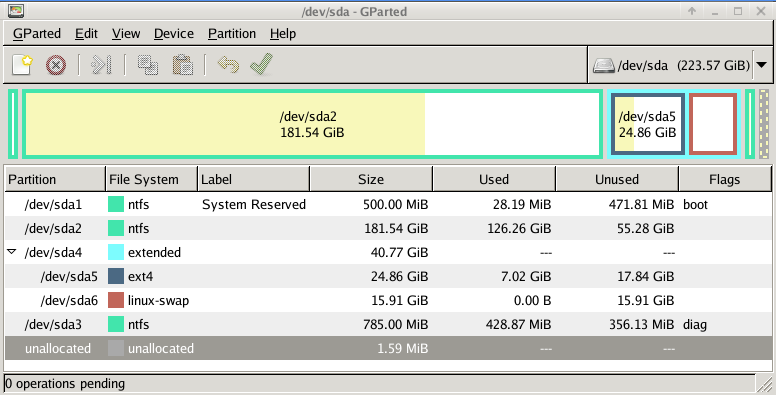 gparted message is misleading as it pertains only for OS booted with lilo, which is not used anymore on modern linux distro where Grub 2 is used most of the time.

So you have nothing to do before reallocating disk space. And ubuntu will automatically used the space added during that process. So again nothing to do there.

This worked for me as well. Reduced a partition on windows to get some unallocated space. Then, boot into Linux mint using Live USB. Using GParted I was able to resize the partition mounted on /

It did give me the same warning but completed successfully. Also, I read somewhere that the unallocated space should be next to the partition you want to extend(right or left). Mine was already next to it. Else, I believe you might have to do some extra steps. Right click on the partition and select resize, it will let you drag to expand the partition.

Not the answer you're looking for? Browse other questions tagged dual-boot partitioning gparted or ask your own question.

2
I need help with disk partition
6
3 OS's on same HDD
1
Partition deallocated
1
Added one extra drive, old dual boot stopped working
0
Dual Boot - Windows does not show
1
Boot problem Ubuntu 1604 on machine with Windows10 and UEFI
0
Do I need to partition my SSD for a windows 10 dual boot?