I'm wanting to Dual boot Windows 10 with Ubuntu Studio 16.04 in UEFI mode (Legacy BIOS is out of the question). I have installation discs of both.

What I've done so far

With no HDDs attached, booted BIOS and disabled CSM (to force UEFI mode).

I plugged in and, using GPT, partitioned & formatted my 3TB HDD then installed Windows 10. I can tell it was successful in installing Windows 10 in UEFI mode as when I run msconfig32 it states the BIOS mode is UEFI.

I then shutdown my PC, unplugged my 3TB, plugged in my 1TB, put in my Ubuntu Studio 16.04 Live disc and booted.
For the sake of providing information if it's related, to successfully install Ubuntu studio I had to:

Steps 2 and 3 were required due a bug in the installation process where the "Force UEFI mode" warning box would not close on clicking Continue. For some reason, performing steps 2 and 3 nullified this issue.

I formatted my 1TB drive using GPT and making the following partitions:

The installation process seemed to be successful, however upon rebooting my PC, my motherboard/firmware refuses to load Ubuntu studio and states:

I don't want to do that.
I tried it (enabling CSM) and it booted Ubuntu Studio...into BIOS mode. I check this by performing:

and it stated BIOS.
I don't get why it's only booting to BIOS mode if I installed it in UEFI mode, clicked Continue on the "Force UEFI mode" warning, and it has a ESP which when I booted (in BIOS mode) stated that it mounted at point /boot/efi and had the boot flag.

I have shutdown and disabled CSM, disabled "Fast Boot" after I realised that it was enabled, checked that "Secure Boot" is disabled (it is) and now I'm stuck as to what to do next.
What should I do? 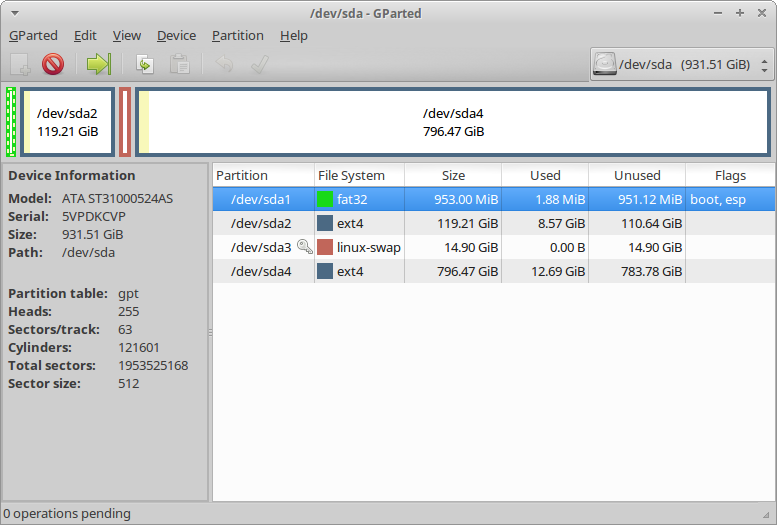 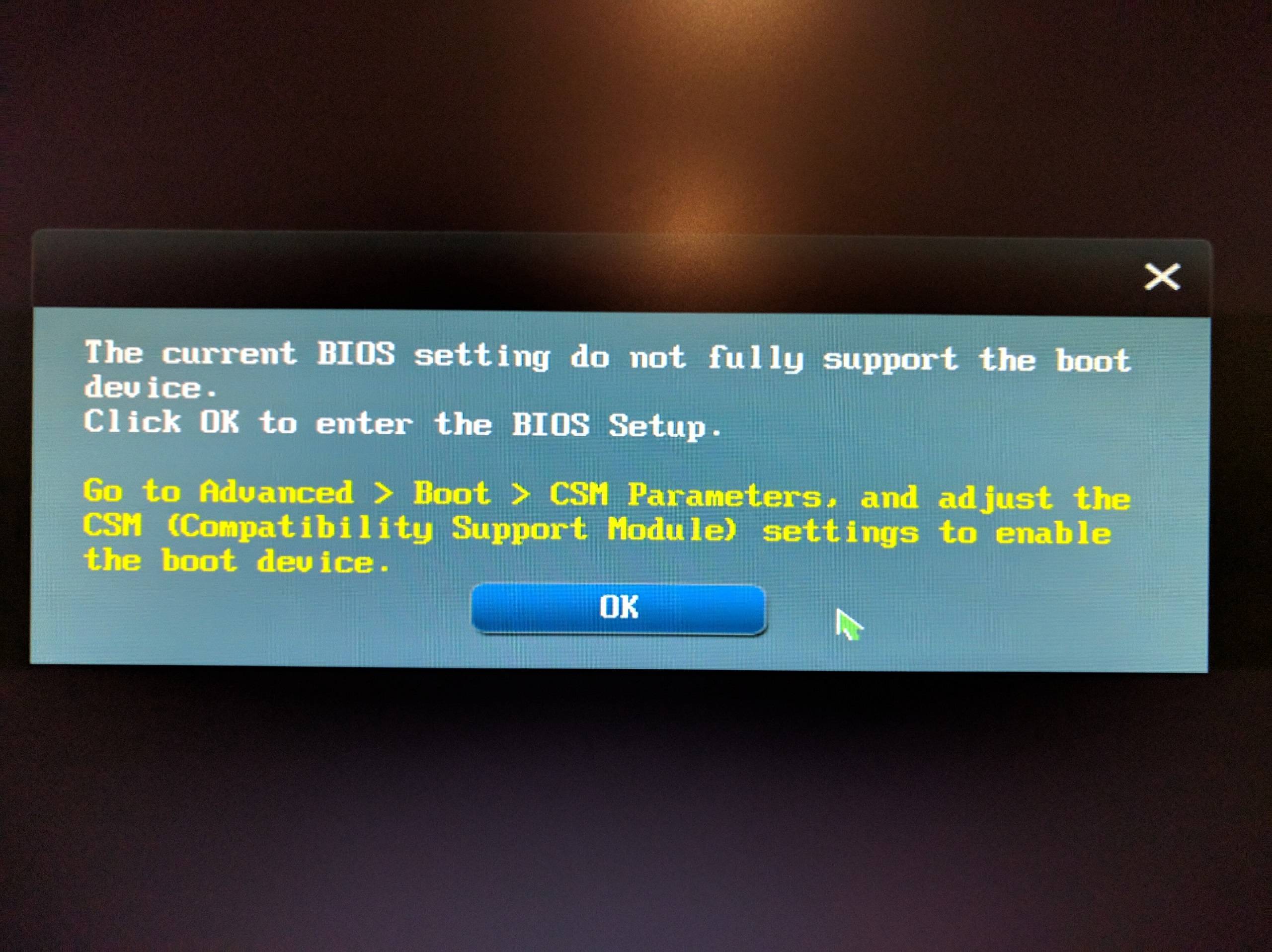 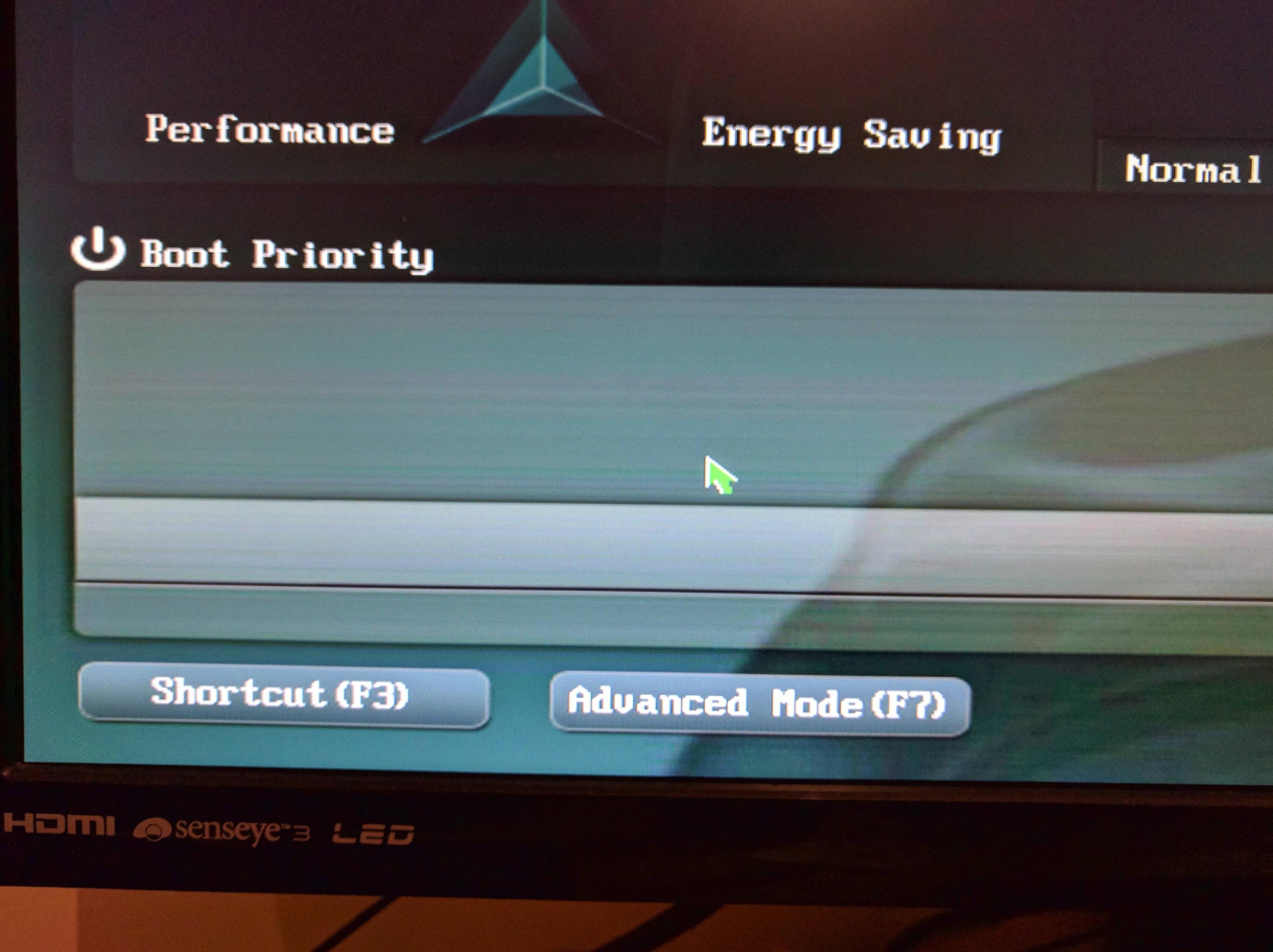 I then shutdown my PC, unplugged my 3TB, plugged in my 1TB, put in my Ubuntu Studio 16.04 Live disc and booted.

This isn't related to the problem you're experiencing, but unplugging disks as you've done, although a useful trick in BIOS, is counter-productive in EFI. The trouble is that many EFIs delete EFI boot manager entries when they detect that they're missing. Thus, when you unplugged the Windows disk and installed Ubuntu on another disk, it's possible your EFI deleted the Windows boot manager entry, which could make it difficult to boot back into Windows again. If you rely on a boot manager like GRUB or rEFInd to manage the boot process, they'll work around this problem -- but in the case of GRUB, you'll need to reconfigure it (sudo update-grub) with both disks plugged in. Also, if you ever try the reverse (unplugging the Ubuntu disk), your firmware may delete the GRUB boot entry, which will then make it impossible to boot Ubuntu without performing additional repairs.

Note also that Windows usually installs a copy of its boot loader as EFI/BOOT/bootx64.efi, which is the fallback filename. Some EFIs also treat the standard Windows EFI/Microsoft/Boot/bootmgfw.efi entry as a sort of fallback entry. Thus, Windows might boot even with its boot entry missing. The same is not true of Ubuntu and its GRUB, though, so once you get things working, you should be extra careful to not unplug the Ubuntu disk if you rely on GRUB as a boot manager.

Steps 2 and 3 were required due a bug in the installation process where the "Force UEFI mode" warning box would not close on clicking Continue.

This sounds like bug #1418706. (I think there may be another report of this bug, too, but I can't quite find it....) Rather than the solution you used, I recommend you put some partitions on the disk before running the installer. You've gotten past this issue, though, so it's not really the problem....

I tried it (enabling CSM) and it booted Ubuntu Studio...into BIOS mode.

This sounds like there's a working BIOS-mode boot loader installed on your disk, which in turn implies that you installed in BIOS/CSM/legacy mode, despite your best efforts to the contrary. Unfortunately, there's no standardization in how the CSM is controlled, and on some computers, it's easy to leave it enabled when you think it's disabled. (I've dealt with some servers that are complete nightmares in that respect -- they've got a bazillion options related to the CSM, and setting one of them incorrectly provides a path for BIOS-mode booting.) You may want to check my page on the CSM for more on this subject. Also, to get more information, you might try running the Boot Info Script. This will generate a file called RESULTS.txt. Post that file to a pastebin site and post the URL to your document here for interpretation.

One way to be reasonably sure you boot in EFI mode is to use my rEFInd boot manager on a USB flash drive or CD-R. With its default options on a UEFI-based PC, rEFInd boots only in EFI mode, so if you can boot Ubuntu via rEFInd, it will be in EFI mode. (On Macs, though, rEFInd can boot Ubuntu in either BIOS mode or EFI mode, depending on what boot loaders and filesystems are in use.) You can then install GRUB manually or install rEFInd (via its PPA or Debian package) to keep booting in EFI mode.

Not the answer you're looking for? Browse other questions tagged boot dual-boot 16.04 uefi or ask your own question.

40
Which commands to convert a Ubuntu BIOS install to EFI/UEFI without boot-repair on single boot hardware?
2
Installed Windows before Ubuntu, both in BIOS mode, but GRUB install failed
1
I can't boot installation live cd in uefi mode but i need to install uefi version of Ubuntu
7
Unable to boot newly installed Ubuntu 16.04 using UEFI mode?
1
UEFI boot menu items for Ubuntu and Linux Mint both launch Ubuntu
0
When installing Ubuntu in UEFI mode, it asks where to install the boot loader
9
How to install ubuntu in UEFI mode
7
How to check if Ubuntu has booted in UEFI mode?
0
UEFI install of Ubuntu 16.04 only boots under dual/legacy mode