Why is plasmashell using 100% cpu?

I'm running Kubuntu 16.04 with KDE 5.5.5 and I've noticed an anomaly in cpu consumption by the plasmashell process. 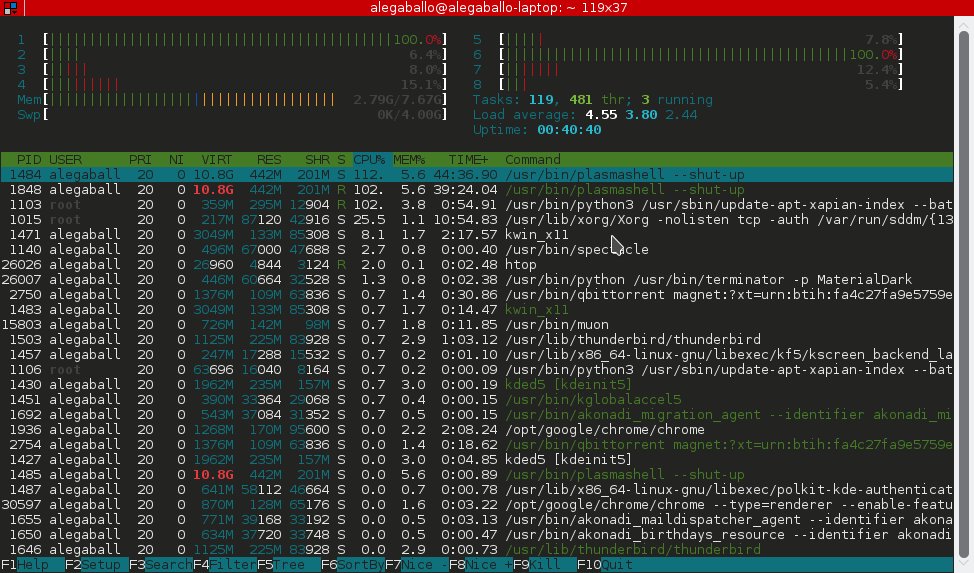 Do you have any idea of the reason?

I'm having a similar issue. The CPU usage increases over time and never goes back down. There is definitely an issue with plasmashell. The only way to deal with the issue is to run:

Plasmashell has had a bug for a long time that any kind of animation in the task bar causes it to use 100% CPU, such as when copying a file, connecting to a Wifi, and even the CPU monitor (that seems to be fixed now).

It seems like the bug is reported here and will be fixed in Plasma 5.8.6.

I have seen the same issue (also plasma 5.5.5), which was accompanied by my the taskmanager panel and mouse cursor freezing, and my laptop fan spinning up to full speed.

This was repeatable after reboot, killing the plasmashell process and restarting lightdm.

my potentially ham-fisted solution was to clear out all the *.crash files and the .lock file sitting in /var/crash.

To explain: I also tried logging into a gnome session to see if the issue was with kde, however this generated a number of errors and $ top showed 8 or so apport.gtk processes, each of which was claiming to be using >85% CPU

a good couple of hours of googling/stackoverflowing led me to the conclusion that something was going wrong with the crash reporting, which was causing issues with the rendering of notifications in plasma.

Mine was something non-animated that I'd added to the base panel. I removed the panel and re-added it, and the problem is gone.

I had this problem, it was caused by the comic strip widget in the desktop not being able to download the comic strip. Removing that widget solved the problem.

If you have this problem, try to see whether it is caused by a widget on your desktop.