Rename files in different directories with the same name, so each has a unique (numbered) name

I need to rename files on my SD card, to be able to copy the contents of multiple sub folders to my HDD. First I need to find them by their extension .MOD (I can do that using find ./path/*.MOD2, as they are in different directories).

I need to rename them because they all have names like MOV001.MOD, MOV002.MOD, in other directory are other videos, but similarly named. This was created by my camera. After renaming, I could copy them by one command to my HDD.

Because of their actual names, when I use cp ./path/*.MOD new-path, the result would be that I overwrite similarly named files.

How can I solve this?

This tiny script renames the files without moving them

Remove echo (it's just to test) after checking that this gives you what you want, to actually rename the files.

n=0 This just sets n as 0 which is where I want bash to start counting from.

A for loop can execute commands iteratively on each file in turn. The syntax is for [variable] in [these things I want to do something to] ; do [command(s)] $[variable]; done I have called the variable files and found your files using a glob: *.MOD is expanded by the shell to any file whose name ends in .MOD (* matches any characters)

printf can format the new numbers with a fixed width for easier sorting. new is another variable - this is the new name for the files.

Referencing the variable files from earlier and replacing MOV* (remember * is any character) with the result of the incrementing number $((++n)) (this is n from the first line of the script, go up by one each time the loop is executed on a file) formatted using the code %02d which to printf means a decimal number of a fixed width of two digits 01, 02 etc. The search and replace pattern includes the . to stop * matching the whole filename and thus removing the extension.

I add the echo just for testing - this shows what will be done instead of actually doing it. Remove the echo when happy with the result to actually execute the command.

mv renames or moves files; its syntax is mv oldname newname. I added the -v flag which tells mv to be "verbose" and report each action. I added -- just to be safe - this tells mv not to accept any further options, which stops any filenames starting with - from being interpreted as options to the command - not needed in your case, but good practice.

Each file specified by the files variable is mved to a unique name created in the new variable. We use $ to reference variables and these should be in "double quotes" to prevent the shell from doing any other expansions on the filenames - this stops special characters or spaces in filenames from causing problems.

You can copy them from a recursive directory (including all sub directories), search for extension and rename them in one step with the script below.

Taken from scripts I use to make sure not to overwrite files, when copying them from a recursive directory:

Copy the script into an empty file, save it as nodupes.py, run it with the input (source-) and output directory as arguments: 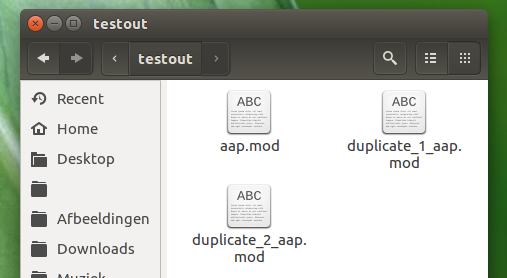 Of course, instead of duplicate_, the script can be changed to use anything numbered (or just numbers).

A generalized version, not searching for one extension only, would be:

Not the answer you're looking for? Browse other questions tagged command-line scripts files directory batch-rename or ask your own question.

2
How to move unknown files to unknown directories based on folder name?
12
How to mass add file extension?
1
How to rename a movie file by using its internal name attribute?
2
Script to copy files to folders with the same shared template names
1
How to copy files from multiple directories, adding the parent folder's name to the filename?
2
Automating a rename files bash script
7
Rename files to be capitalised but not impact on file extensions
0
Copying single files from multiple directories to a new directory with multiple sub directories hosting each file
1
Rename files of the same name in multiple subdirectories