Why the difference between the results with “file --mime-type” and “xdg-mime query filetype”?

I am trying to find the mime-type of a file. I used either 'file --mime-type' or 'xdg-mime', but get different answers? I am not sure to understand?

Why do I have different answers? Which one should I rely on?

Why is there a difference?

file --mime-type -b MY_ISO.iso gives application/x-iso9660-image, which is not useful with a desktop file for context menu actions.

@jdpipe appears to be correct regarding the behavior of xdg-mime and file. There is another utility mimetype that behaves similarly to xdg-mime.

As far as which utility to "trust", it's usually fine to just use mimetype or xdg-mime. However, if you are concerned that a file may have the wrong extension, use file because it examines the contents of the file before reporting its type. For example, if a png is renamed as jpg, file correctly reports "image/png", but xdg-mime and mimetype both incorrectly report "image/jpeg".

Regarding the iso file, I do not know why xdg-mime is telling you model/x.stl-binary. On my computer, it reports application/x-cd-image. Also, using file without the --mime-type flag reports additional information that confirms it is some type of disk image. Perhaps it would be helpful to update the mime database:

The xdg-mime utility from xdg-utils is a more comprehensive program that takes into account your desktop environment (GNOME and relatives, or KDE). In some cases it makes a call to the file utility, but in other cases it looks up the mimetype database for your particular system.

The file utility, as far as I can tell, only looks inside your file, it doesn't look at the filename. Hence the .kmz file, is recognised as a zip file. file makes use of 'magic numbers' which are associated with particular file types, eg the magic string P5 at the start of a file is associated with PGM images from the Netpbm library.

The mimetype database knows about higher-level filetypes, as identified using filename extensions, and can be user-customised. When new programs are installed, the mimetype database is extended and will give answers that might not have been given before certain software was installed. To my knowledge, that behaviour doesn't happen with the file command.

If you want to read more, the xdg-mime details are here -- source code. You can see that it calls file in some cases.

is the one that is reliable.

If you need the mime type to have a context menu action with some file manager like Nautilus or Dolphin, look in that file manager under the file's "Properties". 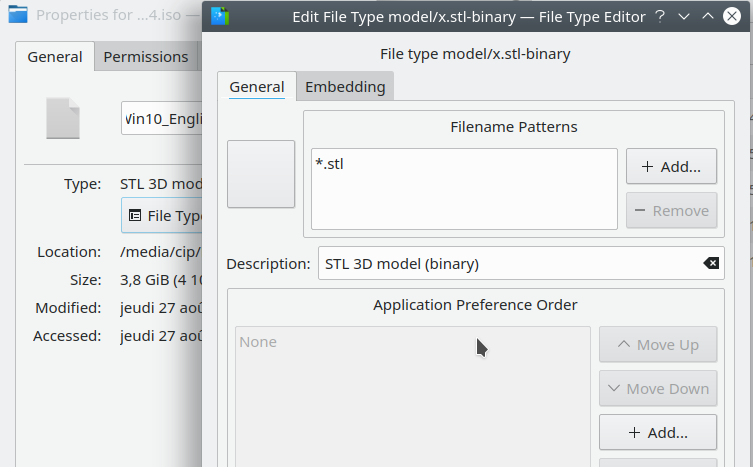 A short web-search with google earth file format gave the answer xdg-mime has the more precise answer, yet the 'z' most likely stands for a 'zipped' fileformat, so first is true too.

Not the answer you're looking for? Browse other questions tagged mime-type or ask your own question.

64
How to get the mime type of a file from the command line?
21
What is the relationship between MIME types and File .extensions?
2
Mime type for iso files in Kubuntu 18.04
1
Programatically modify file associations using standard interface (cases where mimetype does not matter)

2
gnome-open confused: Could not display “/home/msw/anything”
9
'file --mime-type' and 'mimetype' Commands Returning Different Results
0
'file --mime-type' vs 'mimetype' for php files
0
Making sense of MIME mappings
2
Mime type for iso files in Kubuntu 18.04
8
Nautilus and Nemo don't recognize python 3 files
2
How to open *.htm differently than *.html?
3
Why does “MimeType=text/x-shellscript;” not work in this .desktop file?