Can I search in the terminal window text?

I have just now pull some git changes from remote and its a very long log. I want to look some files in the log.

But there is no option to search in the terminal window.

How can I search like we do in windows, there we have find in right click edit menu ?

Or use the shortcut: Ctrl+Shift+F. 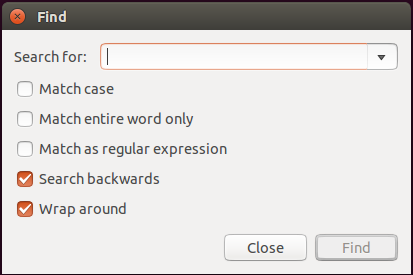 then this is self-explanatory i believe.

While it is possible to do this from gnome-terminal's GUI as explained by heemayl, a better way is to use the UNIX terminal itself. In general, if some command outputs lots of text that you want to search through, a useful thing is to pipe it to less.

This is a simple pager program which allows you to scroll and search through text.

To search for something within less, press / and enter the text you want (supports regexes). To skip to the next matching occurence, press n. To exit less, press q.

As a matter of fact, at least on my setup, git already shows lengthy reports by default in a less-based pager, so there's not really a need for explicitly piping it to less:

If it doesn't do this for you, maybe you need to set

Now, this text-browsing with less is still not so different from a scrolling&searching in a GUI. Where the command line really shines though is that you can use dedicated commands to filter the output before it's ever shown on screen. The most standard tool for that is grep.

Once again though, you don't actually need the special tool if it's git you're talking, because it already has that kind of functionality built in.

66
Setting nautilus-open-terminal to launch Terminator rather than gnome-terminal
52
Open another terminal window with the same SSH session as original window
1
My gnome terminal keep opening new window
0
Right click “open terminal” option no longer on desktop after breaking and fixing Unity
3
How can I change the default terminal window size in Ubuntu 18.04?
1
20.04: Why can't you turn on top-bar menus in Terminal in Preferences?