How to mount a partition?

I am new to Linux and don't know anything about mounting. This question is related to df -h doesn't show /dev/sda. What comments teach me is the partition is not mounted. So, how to do that, since I have no idea of it. I am scared of damaging something accidentally.

Output of lsblk is :

I don't understand why the 100G of sda isn't available. If I have to mount it then HOW?

/dev/sda is a disk, not a partition. A partition identifier contains a number, e.g. /dev/sda1. It looks like you have no partitions on your sda drive. You have to create at least one partition on the empty disk, format it and then mount.

There is a well-written guide at https://help.ubuntu.com/community/InstallingANewHardDrive mentioning all the options, just follow it carefully.

The name /dev/sda represents the first HDD in your system. If you had to hard disk drives in your system, the next one would be called /dev/sdb and so on. However, when ever you use your computer to access files, to install operating systems, to manipulate and/or store files on your hard disk, you are actually manipulating "Partitions" instead of the entirety of the disk. Partitions are portions of the hard disk i.e. /dev/sda which have a starting point and ending point and each partition has it's own filesystem which in layman's terms is a table which contains the name of the file and the starting and ending addresses of the bits that comprise the file.

To create a partition, click on the Partition menu of the Gparted window and Choose "New" 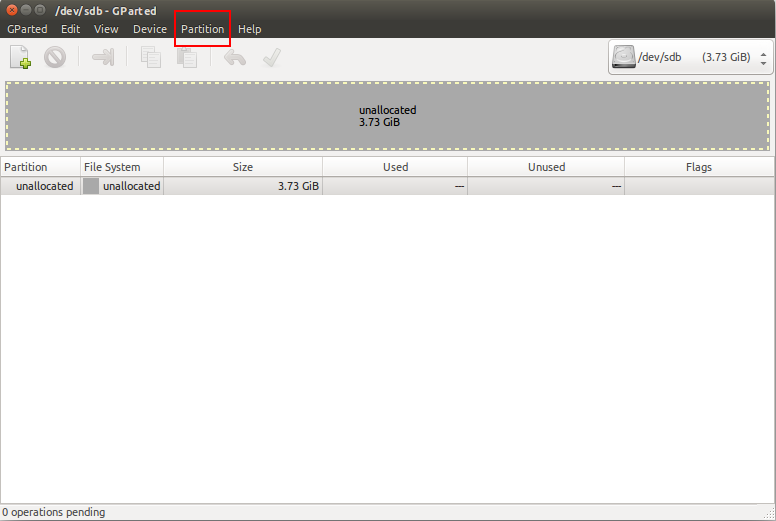 after doing so just click on add on the next windows that pops up. 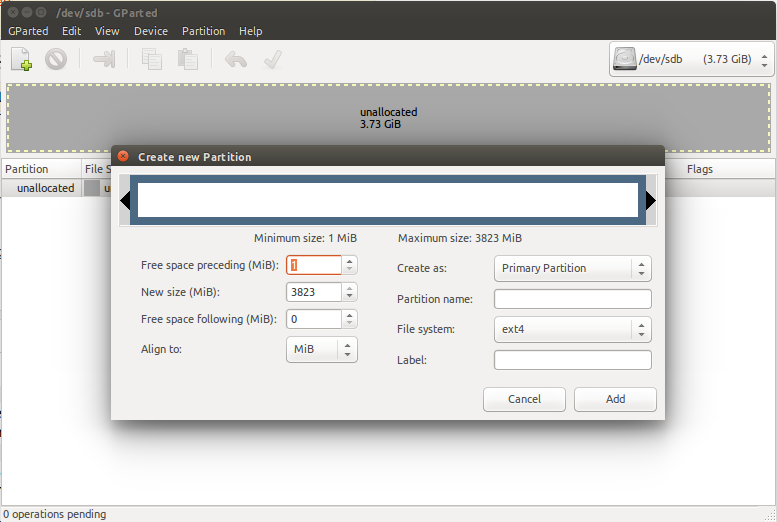 then go to the "edit" menu of the gparted window and click on "Apply All Operations" then follow that with a click on "Apply" on the confirmation windows that pops up next. You now have a partition table, a partition and a filesystem. To mount the filesystem, you can just click on the new "100 GB Volume" addition to the left hand side of your file manager's window.

Not the answer you're looking for? Browse other questions tagged partitioning mount or ask your own question.

0
Why when I retrieve the list of partitions it only gives me one result?
3
File system is not clean (The partition is misaligned by 1024 bytes)
3
Deleted Windows Partitions on drive now what do I do?
1
Boot linux on external hard disk - Send Grub Rescue
0
How to configure existing raid after upgrading to 14.04 from 11
0
Intel RAID5 array Shows < 50% space
0
Unable to mount primary partition in live CD