While installing Ubuntu, It asked me to allocate something called Swap Space, What exactly is it?

While installing Ubuntu, It asked me to allocate something called Swap Space, What exactly is it? What would happen if i dont allocate it?/ What is the use if i did allocate?

Swap space is space on the disk used as if it was temporary memory (RAM). If you did allocate it, your computer would use it when its RAM is starting to be used up. If you don't allocate it, nothing happens unless you run out of RAM space. Then any program wanting more RAM would be closed.

If you want to use hibernate, you need at least as much swap as you have RAM. This is because when your computer hibernates, it copies the RAM to the swap and turns off.

As binW says, swap is slower than RAM.

It is a virtual memory space which is used for hibernation, intensive memory processes and general memory consuming applications. To see details of your swap partition just run at the terminal:

and change the variable: 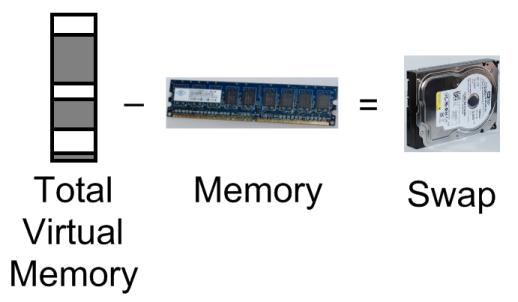 If you hibernate then as far as I know you'll need swap to do so.

in addition to answers already submitted, please note that access to HDD where swap is really in, is much slower than access to data in real RAM. Access to hdd is measured by millisecond whereas access to RAM is measured in microsecond.

6
Sharing swap space between Windows and Ubuntu
1
What happens to my Swap space if I choose to replace Windows with Ubuntu?
1
Need to give swap space as didn't give it while installation
27
Allocate swap after Ubuntu 14.04 LTS installation
0
No space left on device when trying to allocate swap?
0
Ubuntu 18.04 - Swap space not used, Gnome freezing
8
What does Ubuntu do when all RAM gets used up and there's no swap?