Remmina: “Protocol plugin RDP is not installed”, even after purge and install

I had been using Remmina version 0.99.x or something similar for a while, when I decided to upgrade to a higher version, due to Remmina crashing often when copying (using Ctrl+C) or cutting (using Ctrl+X).

But when trying to connect to a Windows machine, Remmina threw up a pop-up that told me that

Protocol plugin RDP is not installed.

I tried fixing this, but to no avail, even purging Remmina and installing it again (I must admit, without a reboot in between).

But nothing has worked so far. I've switched to rdesktop, but how can I fix Remmina?

I just ran into this myself (Kubuntu 14.04 LTS). I had the basic remmina package installed, but I wanted to add in all the optional protocols. I think I figured out why rebooting fixed the problem for you: the remmina process persists. It seems that when you close Remmina, you just close the GUI - the binary is still running, and it needs to be stopped and restarted to be aware that you've given it new plugins. At least, that's what happened in my case, and it explains what you observed - a quick killall remmina at the beginning saves a reboot cycle.

So, here's my method for a fresh Remmina install, with all the client protocols, on any *buntu variant, without nuking any saved connection profiles!

I removed Remmina from my machine yesterday and I shut my machine down at the end of the day. After starting it back up this morning, I installed Remmina again.

After this, I was able to connect to Windows machines again; no complaints about missing plug-ins.

While this has worked for me for now, I won't accept my own answer, since it just happened to work; I have no clue why.

The Remmina developers now maintain a snap in the snap store. You can install the app either from Ubuntu Software (on Ubuntu 16.04 and above) and via the command line (from Ubuntu 14.04).

Installing from the snap store has the benefit that the upstream Remmina developers keep the snap up to date. 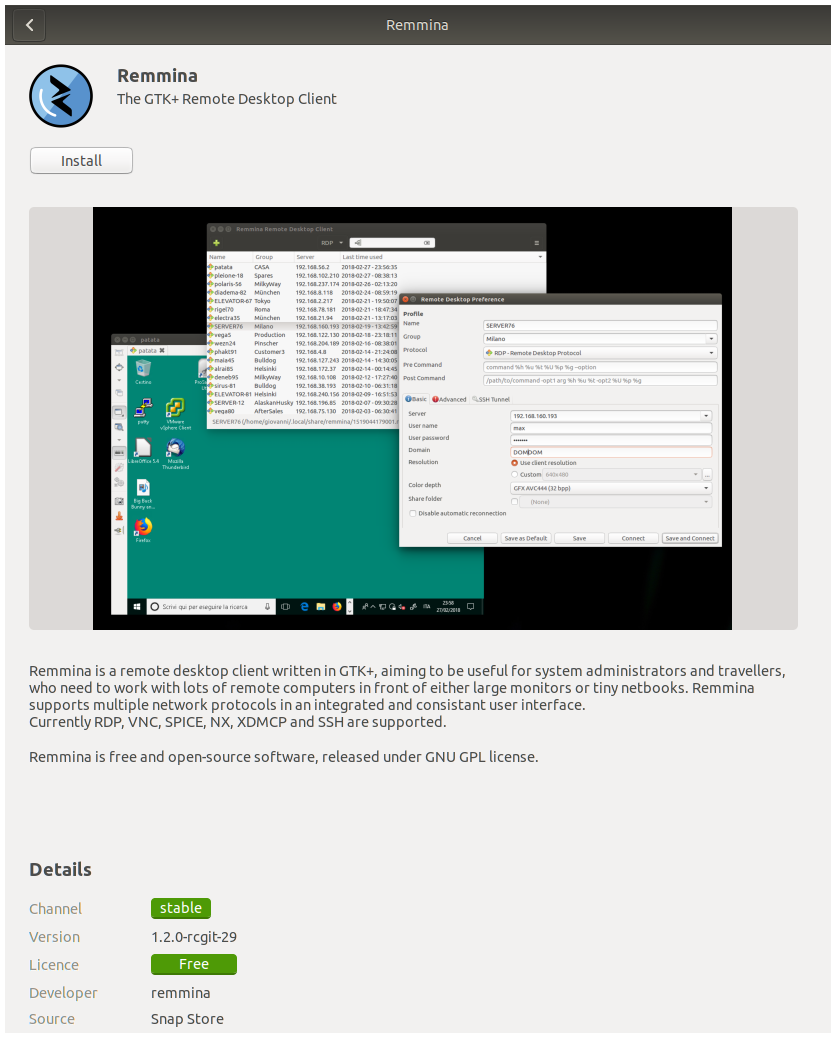 Installing from the Terminal

If you're on Ubuntu 14.04, you may not have snapd installed, which provides support for installing snaps. snapd can be installed easily via apt.

sudo apt-get update sudo apt-get install snapd You may need to logout / back in to ensure icons appear in the launcher for snap installed applications.

Installing Remmina is then simply:

Not the answer you're looking for? Browse other questions tagged apt remote-desktop mint remmina or ask your own question.

45
Why won't Remmina connect to Windows 7 Remote Desktop?
0
how to install gvfs-mtp backend in ubuntu 12.10
11
VNC plugin not working in Remmina
32
Remmina rdp session - no toolbar and keyboard shortcuts don't work
2
Cannot connect to x11vnc server before login
0
How do i fix dependency issue with apport and apt-get (ubuntu 16.04 upgraded from 14.04)
0
remote access between ubuntu desktops 16.04, no connection
0
Problems with system update, full /boot, software installing and unmet package dependencies