“Make Startup Utility” does not save LiveUSB changes

I installed Ubuntu 14.04.5 LTS to SSD, installed few packages which were not installed by default and made some sshd and networking related changes. Then I wanted to create a LiveUSB of this installation. I used the usb-creator-gtk utility for that: 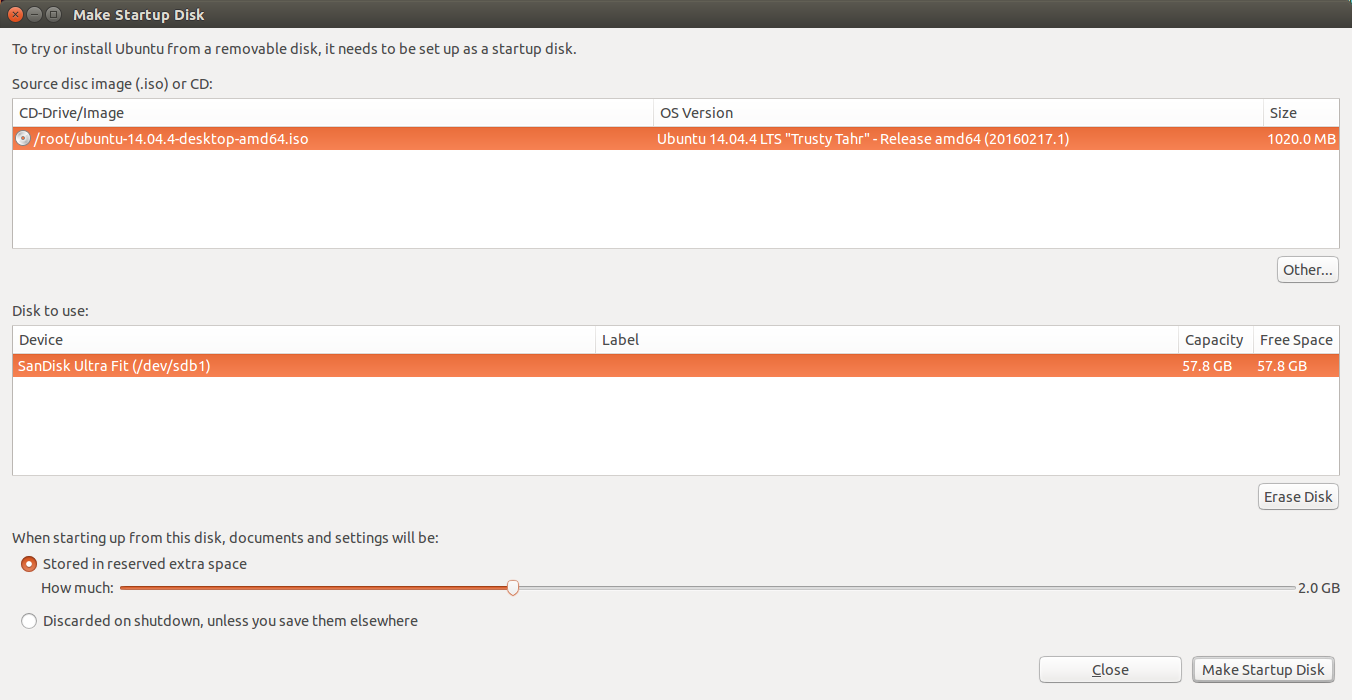 It did create the persistence file:

In addition, I started usb-creator-gtk from terminal as a root and there were no errors printed. Finally I ensured that grub.cfg has the persistent parameter:

However, when I boot an older PC with BIOS or a newer one with UEFI from that USB flash-drive, then in either case the PC boots into vanilla Ubuntu 14.04.5 LTS. In other words packages and configuration changes were not saved. I also tried in a way that I did not install the Ubuntu 14.04.5 LTS to SSD, but ran it as a LiveCD and made "persistent" installation to another USB flash-drive with usb-creator-gtk utility, but this didn't work either.

Why doesn't Make Startup Disk utility save my changes to LiveUSB?

Don't know if this will help, but have you try to change the order of "persistent" and place it after "file=..." like in here ?

The way you are doing it, it won't work.

You are not saving your changes to the ISO, so they are not built in.

It appears that your approach failed due to using the Ubuntu 14.04 ISO as the source.

Why not simply image the SSD after installing and applying your changes and apply that image to to your USB flash drive? Provided that your flash drive is of equal or larger size this is a snap. Even if it's not you can still prevail by shrinking filesystem(s) via gparted.

Creating an Img of of a customized system drive to USB:

open a terminal on your newly configured system and run mount to insure which drive you will be imaging ( it will be mounted at / ). make a note of it.

We will boot off of live media in order insure that the drive we are imaging is not mounted when we image it as we don't want changes to occur during the process. (If you have a dual boot system with 2 flavors of Ubuntu installed you can simply use the 2nd installation to image the first)

Use your BIOS boot selection menu (varies by manufacturer) selecting the live media to boot from.

Once at the live media menu choose “Try without installing”

3.Once the system comes up choose software sources and activate the universe repository as we are going to add a program to our live session.

follow the prompts and install the software as normal.

Once this is complete issue the command sudo fdisk -l

Verify that the drive you wish to duplicate matches your note made previously. Also make note of the size of the drive and insure that the image will fit on it

4.Mount any internal or external media (other than the source drive) you have available to contain the image that has enough space to do so. (The image will be the exact size of the source drive)

Where you mount it is up to you but in the case of an external it will likely automount somewhere like /media/label, pay attention and make note of where your target media is mounted. From here on I will refer to this mount location as /mnt/target and you will substitute your target for mine.

Issue the command dc3dd if=/dev/sdX of=/mnt/target/sdX.img Where sdX is the drive you made note of in step 1. Note

dc3dd will provide a running status of the image creation so you can see how far along it is. Once the image is complete check the size to insure that it will fit on your flash media. If so we can simply apply it to the flash media.

Once the process is complete you can issue the command sync to insure any buffers in use are flushed, remove the flash media and boot your duplicated system on whatever system you want.

Not the answer you're looking for? Browse other questions tagged persistence usb-creator or ask your own question.

1
Install from Persistent LiveUSB, including files / changes on casper-rw
2
Why does the kernel not get updated when using a persistant Live USB?
0
How can I make peristent changes on a USB ubuntu install?
8
USB-live does not save files between sessions
0
can't access drives with persistent liveUSB
4
How to save changes made in a live session to Hard Disk?
0
Does installing from a persistent liveUSB also copy tools and files downloaded by user?
1
How to make a persistent Drive using Startup Disk Creator