How to recover EFI boot?

Today after an apparently normal update the ubuntu desktop became unresponsible than I have to turn it off using power button.

after that I tried to boot again and then I got a bad surprise. it failed. :(

Now the boot menu is not appearing anymore, it is booting directly into windows

could someone give me a help, please?

after trying Boot Repair tool the machine have boot into the Windows 10 directly.

The I turn it off and on pressing F12.

Fortunately I was able to boot ubuntu selecting it in the menu. and did some backup :)

The strange is that grub menu that was presented is full of new entries some related to EFI.

You need to repair the GRUB. Do the following

Boot using a Live USB/CD of Ubuntu. Use Boot Repair to fix the problem.

After booting with Live USB/CD, run following command in terminal:

Use Recomended Repair. This will install GRUB back :) 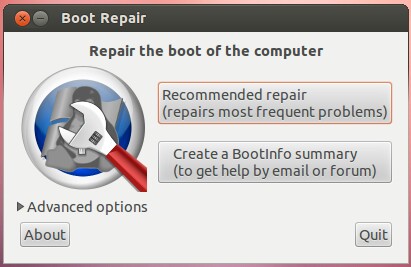 Did you do what your (second) report tells you to do at the end:

If your computer reboots directly into Windows, try to change the boot order in your BIOS. If your BIOS does not allow to change the boot order, change the default boot entry of the Windows bootloader. For example you can boot into Windows, then type the following command in an admin command prompt: bcdedit /set {bootmgr} path \EFI\ubuntu\shimx64.efi paste.ubuntu.com ko (), using paste.debian paste.debian.net ko (), using paste2

1
Ubuntu 14.04 is not booting normaly after a manual hard boot
1
How do I properly install a bootloader for Ubuntu?

4
How can I install Ubuntu in dual-boot with Windows on a ASUS S200E with UEFI?
1
GRUB not loading for dual boot
1
Ubuntu 16.04 does not boot correctly from Toshiba Notebook (EFI)
0
Fresh Ubuntu 16.04 installation does not boot
0
Grub not showing up even after running boot-repair and disabling secure boot
0
How to dual boot using two EFI partition in same disk?