I'm trying to visit https://apps.ubuntu.com and to search for an app. However, it seems based on this screenshot, that this website only supports Ubuntu versions up to Ubuntu 14.04. Is this correct, or am I missing something? 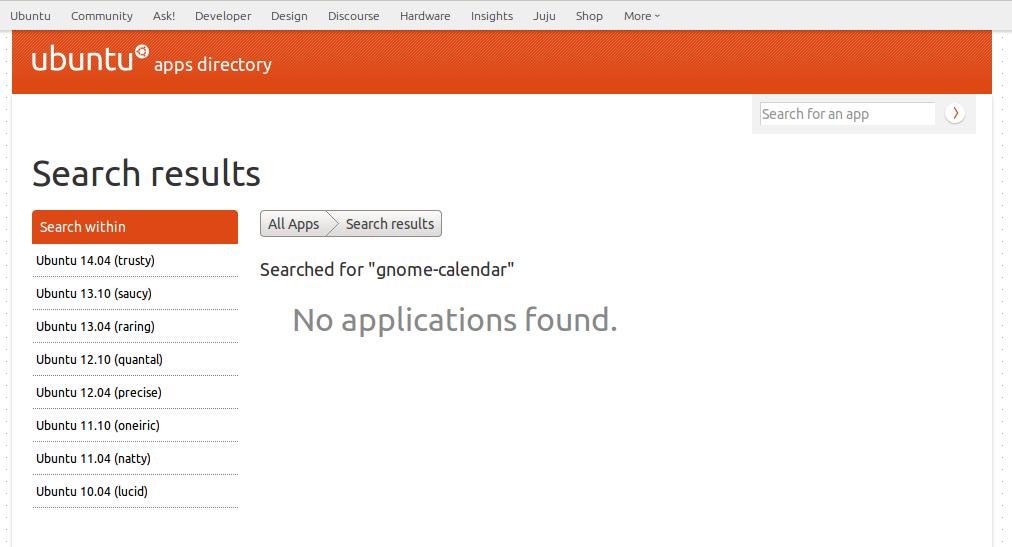 Edit: karel correctly pointed out that although "Ubuntu 14.04 (trusty)" is listed in the search interface of apps.ubuntu.com, it doesn't do anything:

What is going on at apps.ubuntu.com?

Clearly, this is not a great experience, before you could choose to find packages on apps.ubuntu.com for the latest release of Ubuntu (in addition to command-line tools and packages.ubuntu.com), but now you can't. I think most people haven't noticed, because for apps that used to exist in the Ubuntu repositories and continue to exist (like Blender), everything still works as it should.

I've filed these two bug reports about it:

All searches to Ubuntu Apps Directory no longer connect to that website. Instead they are redirected to https://snapcraft.io/store. Even though Ubuntu 12.04 is currently an End Of Life release it is still possible to search for Ubuntu 12.04 packages using rmadison <package-name>. The rmadison program is provided by the devscripts package from the default Ubuntu repositories.

What follows was correct at the time that it was originally posted, but it is obsolete now that Ubuntu Apps Directory is no longer available.

Ubuntu Apps Directory only supports Ubuntu versions from Ubuntu 10.04 to Ubuntu 13.10, all of which are End Of Life versions except for Ubuntu 12.04. Packages from more recent supported releases of Ubuntu can be searched for at Ubuntu Packages Search.

Ubuntu 14.04 is listed in the Ubuntu Apps Directory, but it's not searchable there. Instead it's searchable at Ubuntu Packages Search.

It's obvious from comparing Ubuntu Apps Directory with Ubuntu Packages Search that supported releases at Ubuntu Packages Search receive more support than unsupported releases at Ubuntu Apps Directory do, but I am not going to conjecture about whether this is by coincidence or by design or the reasons official or otherwise why this disparity exists.

Not the answer you're looking for? Browse other questions tagged ubuntu-website or ask your own question.

9
Where can I report a bug for apps.ubuntu.com?
11
Why do cdimage.ubuntu.com and releases.ubuntu.com list different images?