On every operating system whenever I install LibreOffice it always seems to have an issue with properly spacing characters.

Here are some examples: 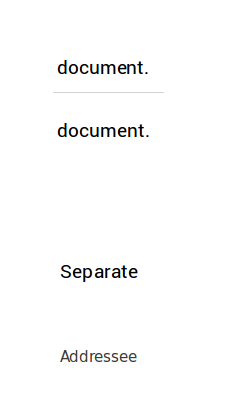 The first word is the exact same word in the same document and the same font, and yet, it looks different. (around letter e and n)

Second word has a strange gap between p and a

In the last word A and d almost overlap.

All of these are regular fonts. Nothing fancy. Any way to fix this?

The weird letter spacing is due to bugs which have been resolved in LibreOffice 5.3.

At the time of writing, version 5.3.0 is available through a PPA, type the following into a terminal to ensure the latest version is installed:

Maybe try to disable the "hardware acceleration" option under the Tools>Properties menu, then LibreOffice>View.

It helped me to solve some letter glitches like that in the past.

Your issue can probably be fixed by adding these settings to ~/.config/fontconfig/fonts.conf:

This snippet does the following:

Font hinting causes letters to be aligned with the pixel grid on your monitor, which can possibly cause kerning issues. By setting this to slight, inter-character space is preserved.

These issues usually only occur with Windows fonts or fonts designed to be metrically equivalent (such as the default LibreOffice font), for those are not designed with the concern of snapping to a pixel grid.

The kerning issues are very likely due to issues introduced in LibreOffice 5.3.

While LO 5.3 did introduce a feature targeted at complex glyph positioning (GPOS) and ligature replacement, etc., this new font rendering engine (or the tech is was attached to) was also somewhat broken/sloppy in regards to traditional kerning.

Because this question was asked shortly after the release of 5.3, the new engine seems the likely suspect here. (Although, as one commenter above notes, we don't know the LO version in question here.)

Thus, the old workaround was to fall back to LO 5.2.x. Very recently, however, LO 7.4 was released which has finally (6 years later) addressed some of these kerning issues. (Well, 7.4 looks good to me thus far, but I have no expectations it will stay fixed--or fixed for all--when it comes to free software.)

If, however, you are seeing kerning issues due to hardware, OS, or app settings (maybe you turned off kerning, font smoothing, or something else), no version of LO will likely help. These issues are typically related to things like anti-aliasing and sub-pixel positioning features such as ClearType. If things look better printed or zoomed in, it's probably not LO's fault.

0
how to type in indic language from English US keyboard
5
Why is Firefox using archaic Japanese characters instead of modern ones?
7
Romanian special characters: the default (comma, standard) version looks bad in LibreOffice, the cedilla versions are reported as incorrect
2
Polish characters in a pdf file not rendered correcly in evince
3
Font "Ubuntu" is missing the U+26B7 Chiron Unicode Character
0
Character spacing in LibreOffice writer
2
Incorrect font spacing to fill PDF form
6
Unicode characters do not have correct width in the terminal