How can I get the Ubuntu shell on Windows 10 to recognize a connected android device?

I'm trying to connect adb to my Android device in the Windows 10 Ubuntu shell, but it doesn't seem to be working: 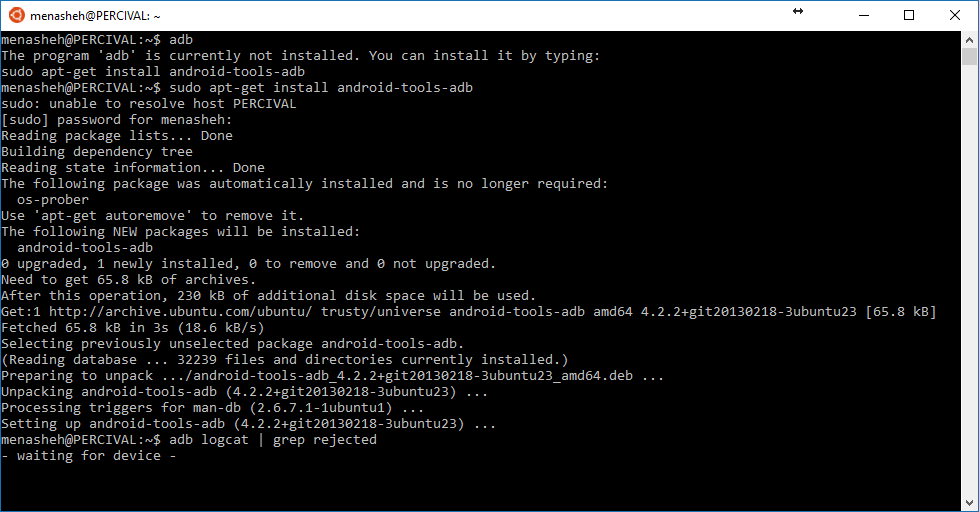 adb does work normally on Windows, so it's not a problem with the phone or the connection. Do I have to do something like mount the port in the Ubuntu shell? How? (The goal is to pass logcat to grep, which would obviously work better in Ubuntu.)

There is a tricky way to make it work even with current limitations. You need to start adb server from cmd:

Then you can call adb from bash shell, it will use existing server and as result will be able to list connected devices.

Note: Because the environment is loading paths from the Windows PATH variable, you may need to run with the .exe extension as well (or alias adb to adb.exe to keep commands the same).

The bash shell under Windows does not have functions to connect to USB devices. So ADB is not going to work until someone adds that.

Here is the proposal for adding USB support.

Adding onto Paul's other answer, you can access the Windows adb server from Ubuntu to resolve this, but it works if and only if the two adb binaries use the same TCP protocol version. For example, adb 7.0.0+r33-2 in Bionic will work with platform-tools 24.0.4 on Windows.

If you have a different version, my first step was just running adb in Windows as he suggests:

And then in Ubuntu:

If the binary protocol versions mismatch, then after running adb in Ubuntu an error is output that gives enough information to get the right binary:

Download and unpack this archive, and rerun adb from cmd:

Now adb will work from Ubuntu.

7
Why can I not see my USB connected Android device over SSH?
16
"Unable to mount Android, Error initialising camera: -60: Could not lock the device" when connecting a Samsung Galaxy S2 via MTP
2
How to fix the issue in connecting allwinner Android tablet for USB debugging on ubuntu 14.04
13
MTP Connection: Unable to mount Samsung Android error many times in a minute!
0
key presses go crazy after Android adb device is connected
0
How to connect Android Samsung 7. 0 on Linux Ubuntu 17.10?
5
Run an ubuntu 16.04 server instance on an Android device (no GUI necessary)