For some reason my Terminator now seems to have 3 languages in use. Yes, three: 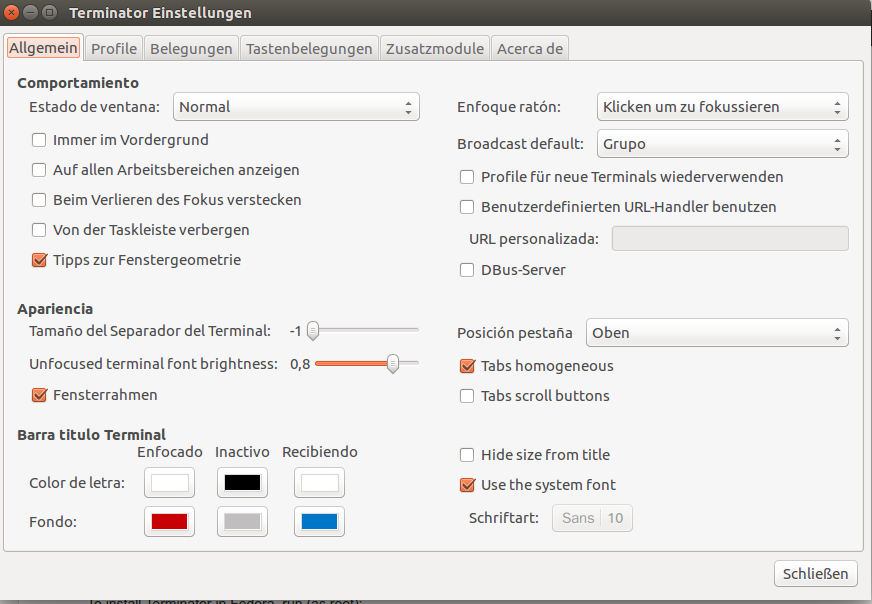 As you can see, there are Spanish, English and German all at the same time.

I think the English ones probably result from incomplete translations of Terminator, which I understand, but still there is the mix-up of Spanish and German.

Also, both Spanish and German can be seen when I run certain commands, such as the following, where the last sentence is in German:

Systemwide my language is German. I used Spanish before but I've already changed that about 2 months ago. I have no idea what could be the cause of the issue.

Multiple language can show up if you have your LANGUAGE variable set to a colon-separated list of languages, e.g. de:es. In this case apps using the gettext engine (that's almost all utilities that have translations) try to pick German, but then fall back to Spanish for each string that is missing its German translation. Should the Spanish translation also be missing for a certain string, the final fallback is always (American) English.

See e.g. https://www.gnu.org/software/gettext/manual/html_node/The-LANGUAGE-variable.html for details. In particular, as pointed out on that page: "you still need to have LANG (or LC_ALL) set to the primary language".

Not the answer you're looking for? Browse other questions tagged command-line gnome-terminal language terminator or ask your own question.

4
How to reset the language of the package descriptions
3
How does language support work in Lubuntu?
2
terminator terminal resize
3
Choose Languages for Spellcheck
6
Remove language dialects from Thunderbird
2
How to set spell check languages browser without displaying menus in those languages
2
Script to launch mutiple terminal of terminator