My old laptop died last morning, but the hard drive is still working.

When my brother made the Ubuntu installation, he chose to encrypt the home folder. So, whenever I try to use the hard drive on another computer, it asks me about the hard drive pass-phrase. I have already asked my brother about it, and he has no clue about where the old pass-phrase is (it's been 3 years).

If I try the command sudo mount /dev/sdb /mnt/hd2 it gives me the following error:

If I try to see the partition table using sudo fdisk -l /dev/sdb I get:

I can't tell for sure if there was any BIOS level password.

And the sudo fsck /dev/sdb command gives the following output:

As far as physical problem go, if I plug in the hard drive, there's no problem on it appearing in /dev, no clicking noises, and the dmesg | tail outputs as follows:

I think that most of these errors are related to the fact that the system can't read the partition table of the device, since it is encrypted.

Finally, there is also a Windows partition in this drive, if that makes any difference.

If there's any need of more information, I'll provide gladly. I also can say that recovering personal data is not my priority in this case, it's more related to being able to use the drive again. Also, I apologize for my English mistakes or improper formating.

After dd finished, I'm facing a weird problem. The disk, that is a 500GB drive, is showing as 2GB, even after formatting it using gparted. Also, even after formating it, when I show it in the gparted GUI, it shows as below: 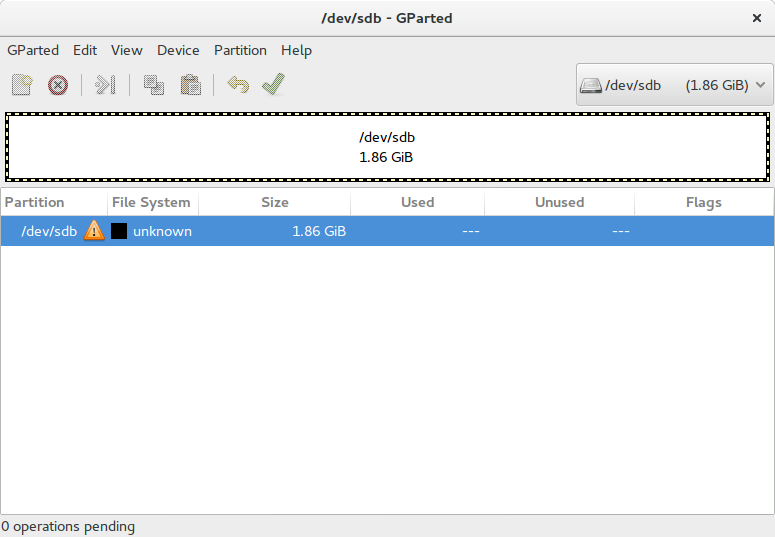 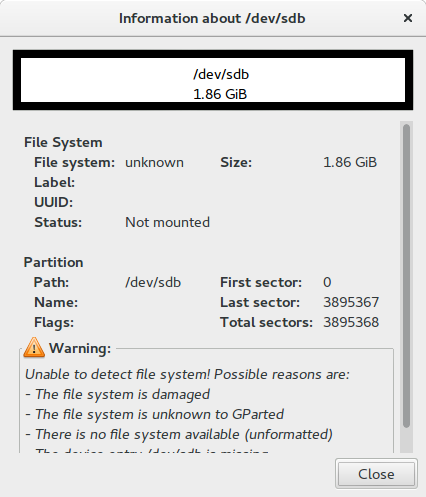 dd reported that wrote 2GB, which I guess was the boot sector or something similar.

The only thing I can guess is that the drive unmounted during dd and remounted really quick, that messed up something. Still, I don't know exactly what's going on. Should I try to dd it again?

As requested, file /dev/sdb gives me the following output:

I think I may have found something that can be useful in understanding what is happening. Here is a screen shot of dd with the drive plugged in: 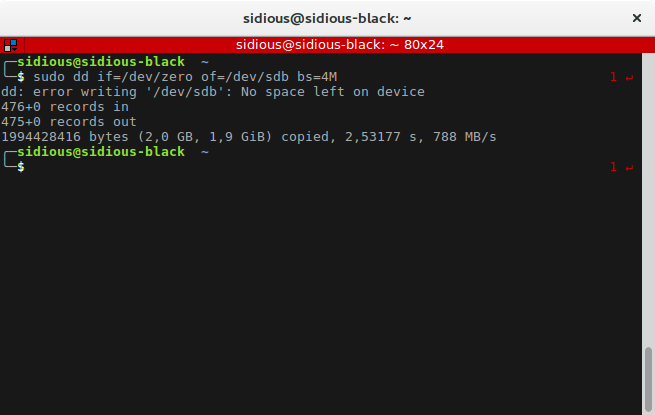 And here, after physically unplugging the drive: 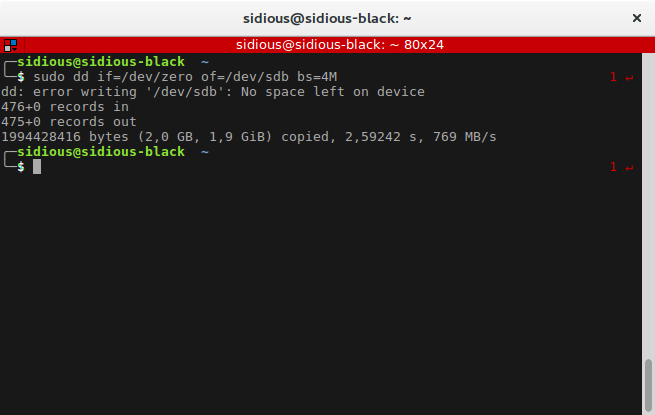 As you can see, there's no error about /dev/sdb not existing anymore, and it still list in in ls as you can see in the screen shot below: 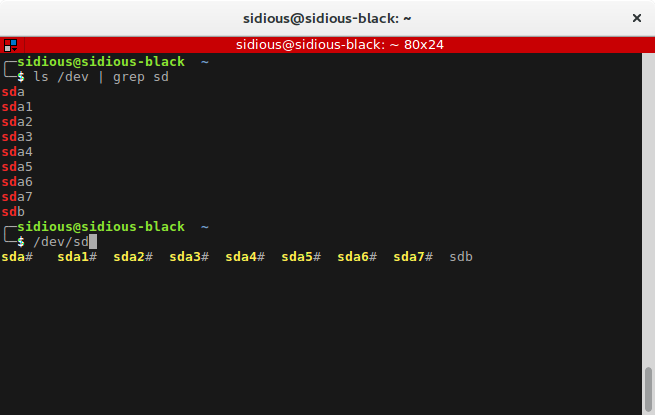 I also noticed this different color that sdb appears, it is the same even with the drive plugged in.

As far as I understand, this "ghost" device is the responsible for the dd problem, is there any way to get rid of it?

I used rm to delete the "ghost" file, still, I have no clue how it ended up there. Now, if I run dd, it does not tell me that it wrote 2GB, and as you can see, after a quick run and interruption, the disk is showing up "correctly" in gparted: 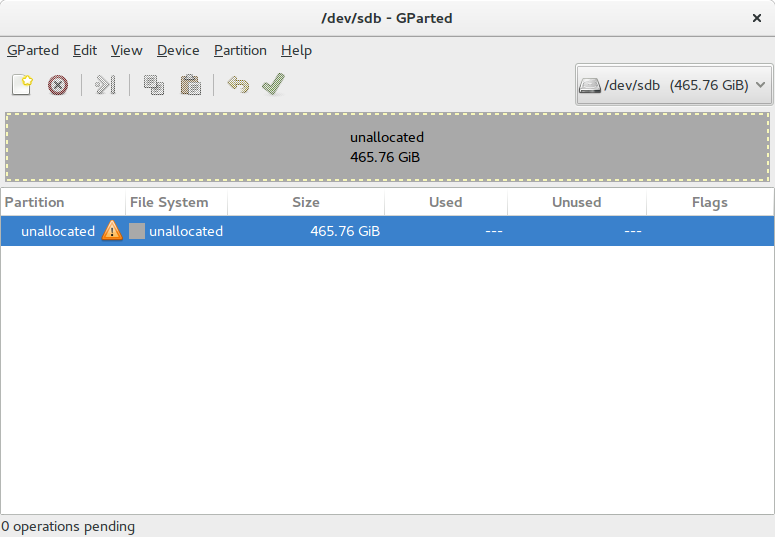 But even so, opening gparted is giving me loads of error windows like this:

Similar windows appear if I try to create a new partition table, or create a new partition in the drive. Does that mean that I have to run dd in the entire device or that the drive has physical damage? One thing to notice is that I added the option status=progress on the dd command, and after some time running(not always in the same size) there is no more progress updates, and I'm not sure if dd is stuck in a bad sector or something like that. The command I'm using now is sudo dd if=/dev/zero of=/dev/sdb bs=4M status=progress.

So, gnome-disks doesn't give me the option(at least is not enabling) to perform a self test on the drive. Nevertheless, I tried using gsmartcontrol, and this is what I got: 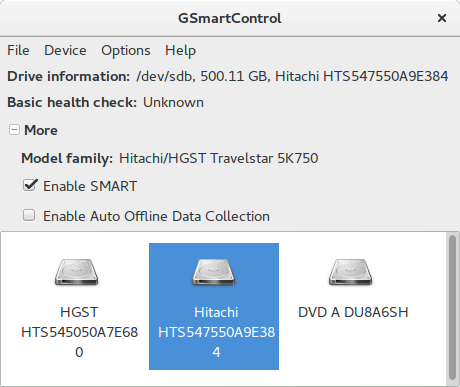 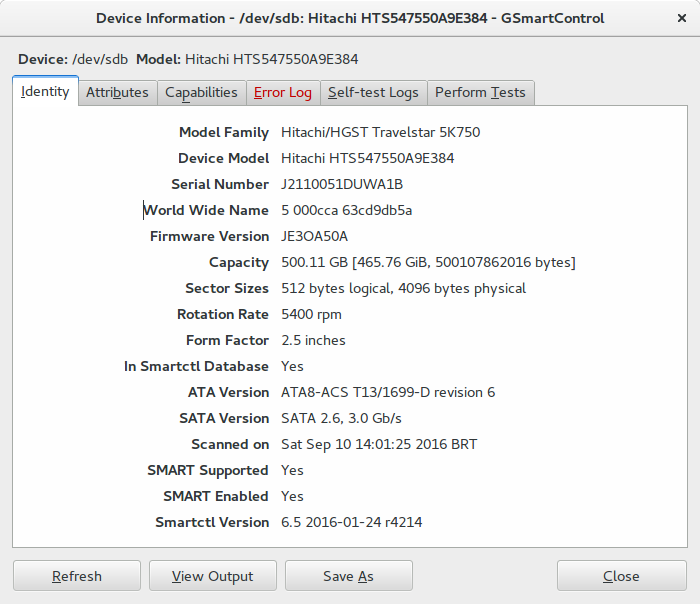 And if I try performing a self test using this tool, I get this error. 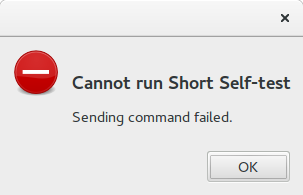 by using the command line version, running sudo smartctl /dev/sdb -a should give me the SMART information, and since the output was quite long, I pasted it on pastebin because I wasn't sure if this post was getting too big.

According to the output, there's a lot of errors, but I'm not sure if they are happening because of the encrypted drive problem.

Since there's a BIOS level password active in the drive, and the old computer is dead, there's nothing more to do, except buy a new drive. I'm marking this post as solved. Thanks to everyone who joined and gave toughts about it.

Read carefully. Your HDD is encrypted. Maybe your Ubuntu home folder is AS well, but the hard drive itself is encrypted, too. Normally the encryption can be enabled and disabled in BIOS, if you have the password. If you're very unlucky, the drive was encrypted through TPM chips on the old computer, where you won't be able to recover the password anyway. Read the docs of the system, where the hard drive used to be.

That's why smart claims so many errors, every sata command is neglected, because the drive first wants authorization.

Not the answer you're looking for? Browse other questions tagged hard-drive encryption data-recovery or ask your own question.