How do I get menu accelerator keyboard shortcuts to work in Terminal?

I was previously using Ubuntu 14.04 and accelerators (keyboard shortcuts for activating menu items) worked just fine. For example, in gnome-terminal, I could hit Alt-E to open the Edit menu, then P to select/execute the Paste menu item.

Since upgrading to 16.04 (did a fresh install, to be precise), this only works in some apps, like LibreOffice, but no longer works in GNOME Terminal.

According to https://help.ubuntu.com/stable/ubuntu-help/keyboard-nav.html, this should still be possible:

Hold down the Alt key to reveal accelerators: underlined letters on menu items, buttons, and other controls. Press Alt plus the underlined letter to activate a control, just as if you had clicked on it.

but this is the behavior I observe instead:

I can hold to get the menu to appear, but:

Instead, when I press Alt-E, it simply prints ^[e in the terminal.

This is highly annoying since I used to use those keyboard shortcuts as the main way to access the menus.

I just stumbled upon the answer...

Apparently Gnome Terminal is different from "normal" apps and has accelerators turned off by default? (Why is this?)

Anyway, the solution was to go to Edit menu -> Preferences -> General and enable the "Enable mnemonics" checkbox. 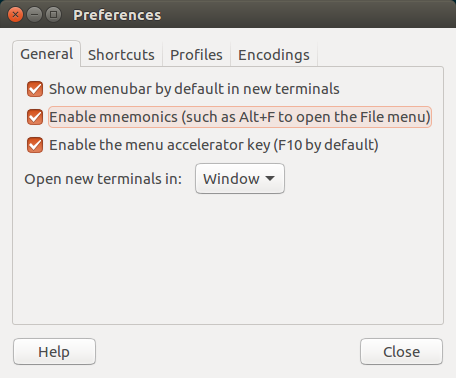 Also curious, why are they called mnemonics in this case but accelerators" in the official help documentation? Perhaps a consistent naming should be adopted to make it less confusing? I'd vote for "mnemonics" now that I'm aware of that term (I'd never heard of it before today); "accelerators" has too many other meanings.

Not the answer you're looking for? Browse other questions tagged shortcut-keys gnome-terminal or ask your own question.

3
Why does KDE's Konsole not have top-level menu-accelerator keys? Is it a bug? Is there a workaround?
55
How to disable the alt-hotkey behavior on gnome terminal?
3
keyboard shortcuts misbehavior Gnome 3.6
4
Always show keyboard shortcuts in Gnome — take effect without a restart
0
Keyboard shortcuts work ONLY in qwerty layout
6
Ubuntu 14.04 OS Keyboard Shortcuts Caught by Programs
0
How do you remap the behaviour of the ALT key?
2
What is the keyboard shortcut for accessing the main (hamburger) menu in Gedit?
2
Can't access terminal menus from keyboard in 18.04