I wanted to move some of the Nautilus scripts, like print, edit as root, convert to pdf from the "Scripts" folder in the contextual menu (~/.local/share/nautilus/scripts) to their own entry.

When I select a sample file and run the script "edit as root" from the contextual menu>Scripts>Edit as root entry, it works.

When I create a Nautilus-Actions Configuration Tool entry for the same exact script (same file, same location) and select the same exact sample file, it opens a blank file.

I've tried this with printing too. Same result. It has something to do with designating the file that is selected. But that seems weird since I am running the same exact script, just via Nautilus-Actions.

How do I tell Nautilus-Actions to run the scripts, using the selected file?

I think I figured it out. I needed to have the %f flag in the Parameters field on the Command tab. The Example field shows you what command will be launched based on the parameters you use (see Legend for a list of the parameters). The %f directed Nautilus Actions to issue the command after the path on the selected file.

Here is a picture: 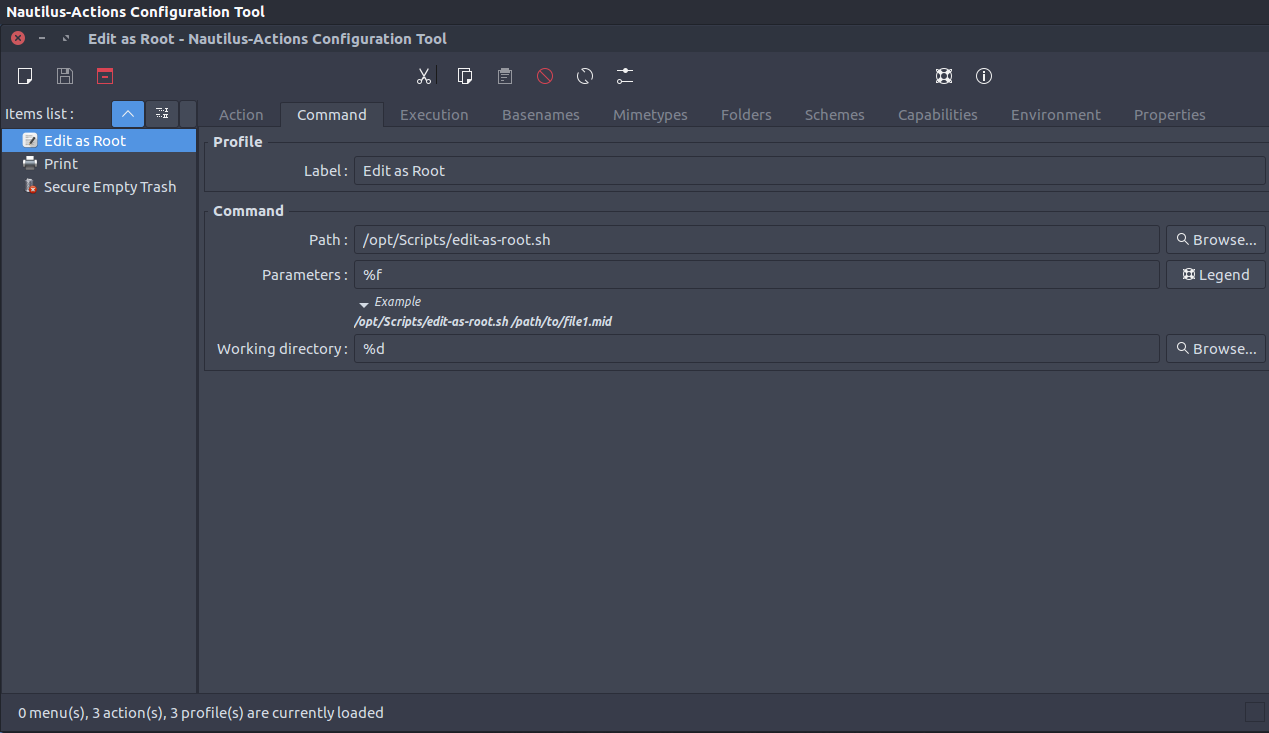 This works using the script in my question for edit as root.

To Print, it is really easy -- no script needed (and I couldn't get any of the scripts to work) -- all you need to do is put lpr in the Path on the Command tab and the parameter %f. This issues the command lpr /path_to_file.

So the problem I was having appears to be (1) I didn't designate the path for the script to work on and (2) although the print scripts I was using are self-contained (they don't function with a path after them) they didn't seem to want to work with or without the %f parameter. I still don't understand this.

Here are the entries that I use for my NA (in case others find them useful):

1
How to add a contextual menu item to .psd files in Nautilus?
1
Error when running script ('compress-pdf') in Thunar custom actions
1
Nautilus - When I select to open with gEdit, settings aren't saved
3
Nautilus: Custom Action on selected files via keyboard short-cut
2
Nautilus (context menu) script to quickly rename a file using $RANDOM - but how?
1
Add nautilus scripts to the context menu/actions
5
KDE Service Menus get list of selected files
2
How to recursively and automatically convert all TIFs to an aggregated PDF per directory?