Is my Ubuntu LTS EOL?

Lately whenever I run software update I get the message 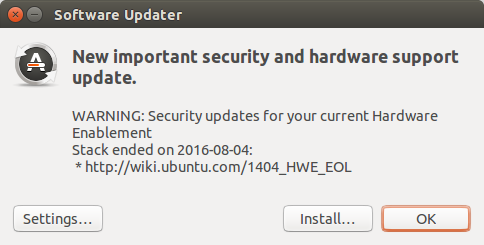 suggesting that my version of Ubuntu is EOL. But when I run lsb_release -a I get

The message is saying that the hardware enablement stack that you are on is EOL. See the wiki page on HWE EOL notifications.

This is just one piece of Ubuntu, for those who are running it. It is not the same as the entire OS.

The HWE allows users to take advantage of later kernel improvements and bug fixes while staying on an older LTS version.

You should probably go ahead and upgrade the HWE, otherwise you may miss out on security fixes.

Not the answer you're looking for? Browse other questions tagged 14.04 lts or ask your own question.

0
Ubuntu 14.04 claiming its HWE is EOL?
0
Meaning of a software update message and warning