I have heard that the world's fastest supercomputer, Tianhe 2 , runs Ubuntu Kylin. Is it true ? What type of Operating System is Ubuntu Kylin?

Tianhe - 2 and Its Operating System 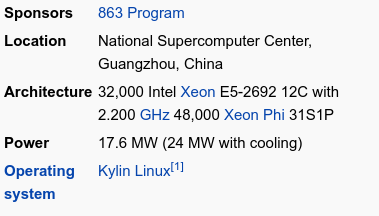 Quote from the original article by Dongarra:

The Software Stack The Tianhe-2 is using Kylin Linux as the operating system. Kylin is an operating system developed by the National University for Defense Technology, and successfully approved by China’s 863 Hi-tech Research and Development Program office in 2006. See http://en.wikipedia.org/wiki/Kylin_(operating_system) for addition details . . .This is the same OS used in the Tianhe-1A.

Since I can speak Chinese, I have also consulted one of the articles on the National Supercomputer Center in Guangzhou website:

Translation of the passage:

Kylin Linux is a separate project, which originally was based on FreeBSD, so it is different from Ubuntu Kylin. It should be noted that Ubuntu Kylin in and of itself has Ubuntu as base and Unity desktop , but distinguishes itself in providing apps that are specifically tailored for mainland Chinese users. Just as any other Ubuntu flavor, it can serve as server for computational or other purposes.

Not the answer you're looking for? Browse other questions tagged server kylin or ask your own question.

8
What is the difference between Ubuntu Kylin and Ubuntu with default language chinese?
1
Touchpad not working and boot screen says 'Ubuntu Kylin' after upgrading to 14.04
3
Changing a Logo: What is the Name of this Little Image File?
1
Touchpad functionalities to laptop
1
How can I use both Sogou Pinyin and Dead Keys on Ubuntu or Kylin?
3
I have a Samsung portable SSD and can't open
0
Ubuntu froze after gnome install
5
Why has my Ubuntu 17.10 become Ubuntu 17.10 Kylin?
1
Looking for something simila to Windows. Does Kylin work outside of china?