This fontcofig error is still filling up lines in my terminal 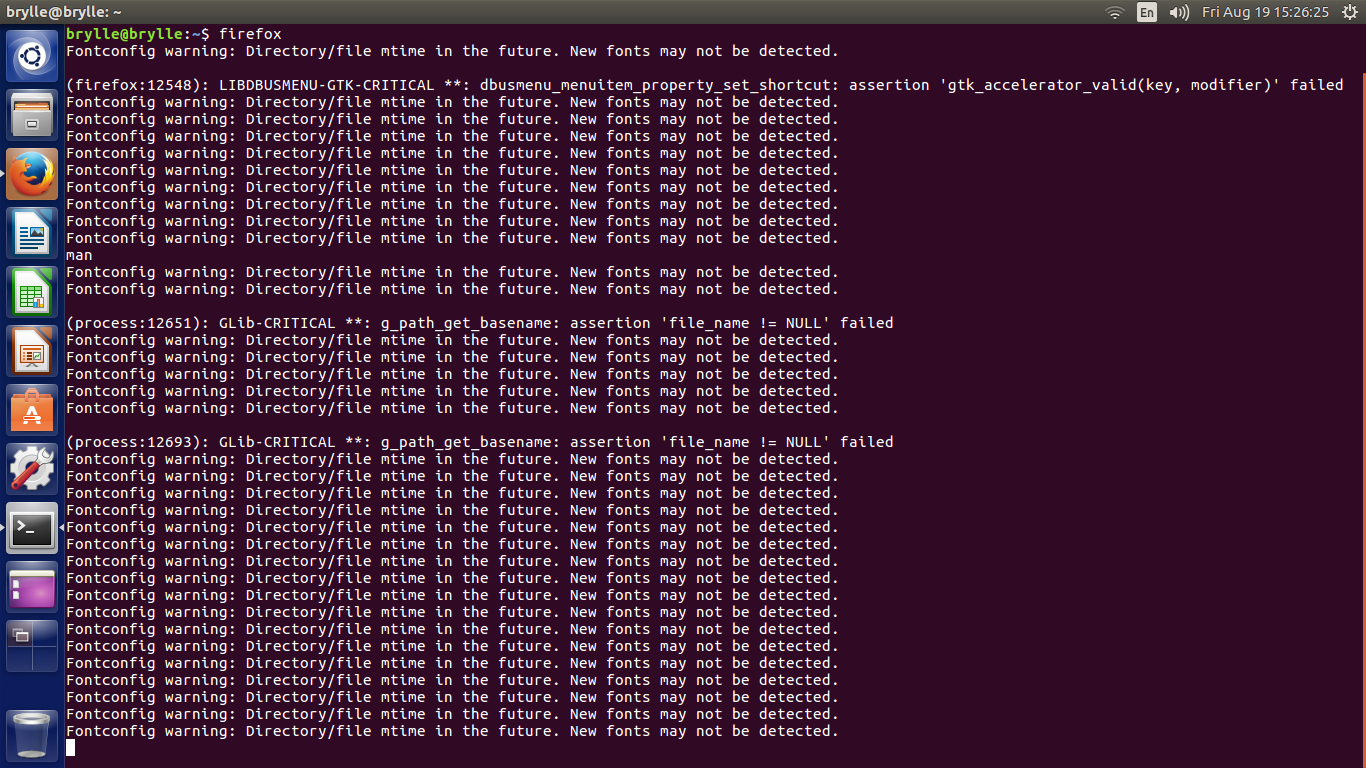 I'm new to Linux distros (using Ubuntu 16.04) and I need help to solve this problem. I've searched for threads and found one, Fontconfig error - "out of memory", but I really can't apply the solution presented there because my terminal is still busy laying out these errors; it may not also be the thread I need to look for because the terminal doesn't say I'm out of memory, this happened when I opened Firefox. (I don't want to just kill every process, I did that a couple of times now and what usually happens when things go awfully wrong, my internal HDD becomes read-only. btw, I'm still a week-old user of Ubuntu) How do I safely abort whatever the terminal is doing?

I closed Firefox and the terminal stopped the warnings, but I want to know what's behind that. Does anyone know?

This is a warning, not an error. It's a message for developers about an issue that needs attention in order to prevent future problems. See this question which explains this. As an end-user of the program, you can safely ignore the warnings. This isn't the same issue as the fontconfig error question you linked to - the message is completely different.

If you want to run Firefox from a terminal and not see all that stuff (see here), do this:

>/dev/null 2>&1 redirects anything that would be printed to the terminal into oblivion
& tells the process to run in the background so you can keep using your terminal.

You can also add disown to the end of the command, so Firefox will not be killed when you close the terminal.

In your current case, you can either focus Firefox and close it, or in the terminal press ctrl+z to freeze the process and then send it to the background by typing bg in this case you will get your prompt back and be able to enter commands, but the process will keep printing warnings until you close either Firefox or the terminal.

Update: @Anwar pointed out that if you update to the latest Firefox (48) the fontconfig warning will be gone - see, the devs fixed it :)

Not the answer you're looking for? Browse other questions tagged firefox fonts or ask your own question.

11
Why are there so many console messages from GTK+ applications?
6
Regain control after opening firefox via terminal
6
Fontconfig error - “out of memory”

3
Fontconfig warning: “/etc/fonts/conf.d/90-fonts-unfonts-core.conf”
9
wrong letter positioning and font in PDF form
27
Firefox freezing with 100% CPU usage for 30 seconds when launching Chromium
4
How do I configure the result of the fontconfig command fc-match serif?
0
How to fix “Fontconfig warning […] Having multiple <familiy> in <alias> isn't supported […]”?
3
disabling firefox background upgrades