Today I decided to set up my own Ubuntu server using an HP laptop from 2011(HP Probook 4330s).

I installed it using a usb stick and during setup I made an internet connection to my wifi. It seemed like the connection worked and I checked my router and it displayed a working wireless connection to this laptop(wireless lamp on laptop also displayed connected).

When installation was finished and the Ubuntu was restarted I didn't have any internet on wireless or cable. The wireless lamp on laptop displayed not connected. My router did not have a connection to my laptop.

I started searching the web and tried several options for getting the internet up and running.

Some suggested that there was a driver issue, but I don't believe that is the case since I during setup did have a connection. But what do I know?

Can anyone find out a solution with this?

Here's what I get with commands people usually post. 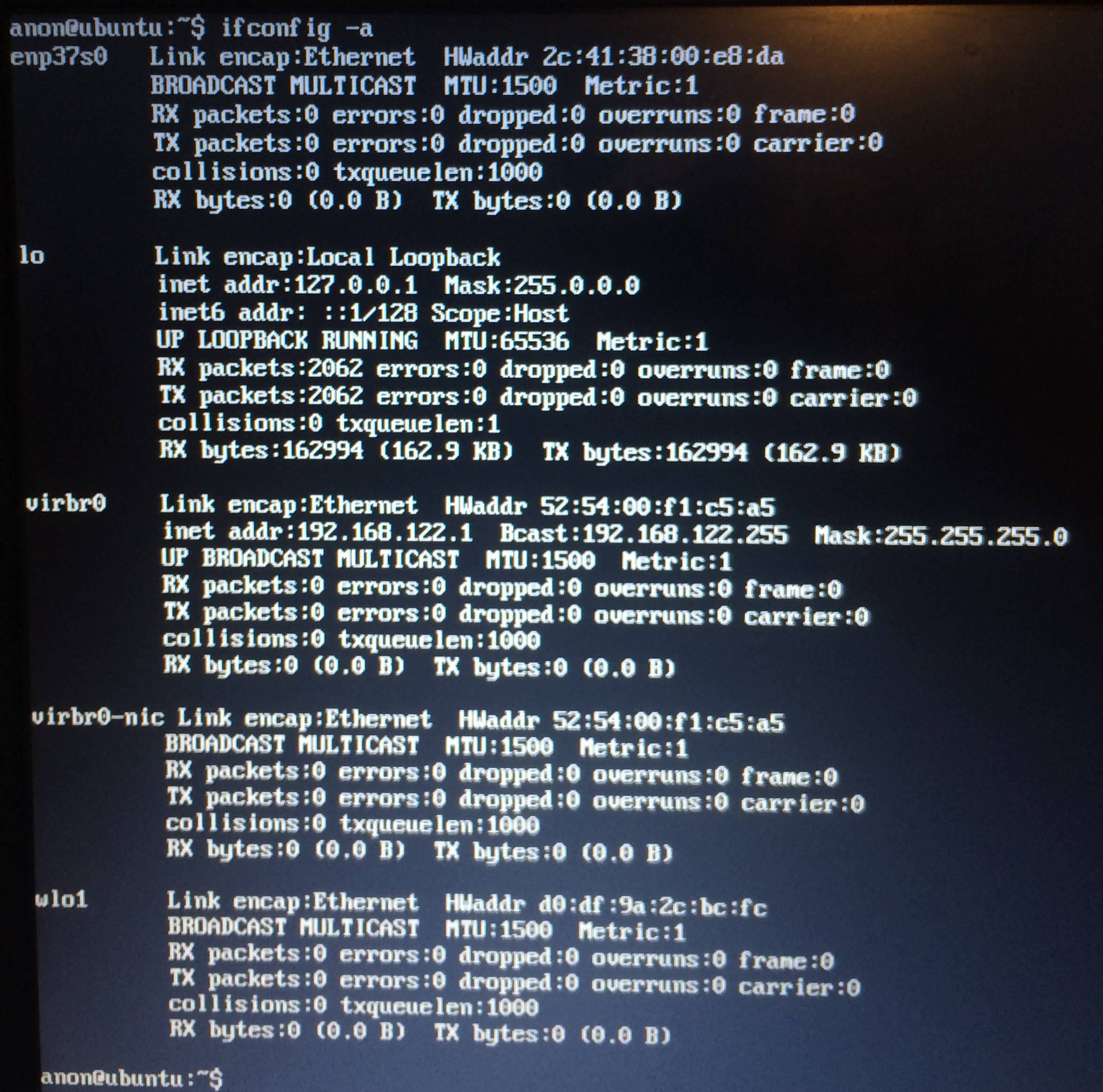 I did mess around in /etc/network/interfaces

I'm thinking of trying an older version of Ubuntu and see if that works, but It's really annoying that I can't get the internet working. Does anyone have a solution for this?

UPDATE Have tried commands with rfkill, but for some reason rfkill is not installed on my system.

UPDATE2 Managed to install rfkill through my wired connection and did a rfkill list all that showed that there is a hard block on my wireless card(a physical button on my laptop). But pressing that button doesn't change anything..

Do not try an older version of Ubuntu; it won't work there either until you fix the /etc/network/interfaces file.

In your ifconfig you have neither an eth0 nor wlan0 so these lines are meaningless.

Every wireless interface requires the name of the SSID to which you wish to connect as well as the password, assuming the network is encrypted, as it should be.

Be sure to select a static address outside the range used by the DHCP server in the router, switch or other access point. Of course, substitute your details here. I recommend that servers use a static IP address so that you can later find it with ssh and ftp.

Get the system to read and use the changes:

If your wireless is hard-blocked, it is probably because the helper module hp-wmi doesn't properly translate key presses into action; in your case, 'turn on the wireless, please.'

You can remove the module temporarily to see if it helps:

If it helps, we can blacklist the module.

Since 16.04.1 is the latest stable kernel version and, presumably, the latest version of hp-wmi, it will do no good to look for a later Ubuntu version. As an off chance, you might try an earlier version, 14.04, to see if hp-wmi works as expected. You should be able to verify that it works or not by running a live session.

Finally, you can try the famous pin 13 trick: http://madwifi-project.org/wiki/UserDocs/MiniPCI#MaskingPin13

If you are thinking of getting a USB wireless device, I can assure you that I have worked on more than a few cases where rfkill also blocked USB wireless.

In any case, I'd suggest that you register and file a bug report against hp-wmi: https://help.ubuntu.com/community/ReportingBugs

To complement chili555's answer, I would suggest looking at the output of the dmesg command for warnings or errors thrown by the kernel or the modules responsible of handling your network adapters.

I have personally learned quite a few things about my laptop and fixed otherwise cryptic issues just by examining what dmesg was trying to tell me.

Not the answer you're looking for? Browse other questions tagged networking drivers server network-manager internet or ask your own question.