Does Ubuntu need regular cleanups like Windows. For example:

I am not referring to web browsers only.

In case I never do a cleanup, will I have a system like new without my hard drive being full of temporary files, packages, etc.?

Will the performance degrade overtime if a cleanup is not done.

Just to give an idea, taking Windows as base. In windows you need to do a cleanup mostly every week if not every day (I use as an example the fact that I worked in over 30 cyber cafes which are in total more than 500+ PCs. The work the got from users made having to cleanup everyday a typical job.). In Ubuntu, this cleanup is actually not needed so often, but if you actually need to do it you have several command line tools like apt-get or aptitude that do a nice cleaning and GUI tools like ubuntu tweak that also do this. The cleanup for Ubuntu can be done every 6 to 12 months. Yes that is right, every so many months you can do it or in my case every 2 or 3 years.

This really depends on the amount of work you put the PC through. When I say work I mean, downloading files, moving files, creating files, deleting or copying files. All of this on a daily basis. Most Windows users know that the performance of any Windows degrades really fast if no optimizations are done. I have had cases where the user has gone a full year with no need to optimize anything and had other cases where the user had to literally format the PC after a month. It depends on the computer usage. The 1 year guy used the computer for word processing and internet only. The 1 month used it to download a lot of stuff, music, videos, games, deleted some, moved some, etc.. In all of this time, both did not do any optimizations.

In Ubuntu you do get a performance degradation, but from experience you need to:

If by performance and space wasted you are worry, then you can do the check every year or two since you will not be wasting a lot of space. Performance wise, Ubuntu (or any other distro for that matter) is not influence in performance by the amount of garbage left behind in the system that fills the HDD. That is a Windows problem not a Linux one where, if you get around 25% to 35% of the space left, the system starts slowing down (Shown more in Windows XP than in Vista or 7/8). Anyway, like I said before, having a 99.99% hard drive full of stuff will not slow you down. The only thing is you would need to clean your logs which are found in /var/log. This will increase overtime and the folder will hold many Megabytes or Gigabytes of information depending on the amount of time and the services installed. For a 6 month cycle, I get around 20MB in the log folder.

If you are really paranoid you have this command:

(Only if you have aptitude installed)

(Use apt-get which already comes by default)

and then run ubuntu-tweak and there is an option called Janitor which is used for spring cleaning as seen in the picture: 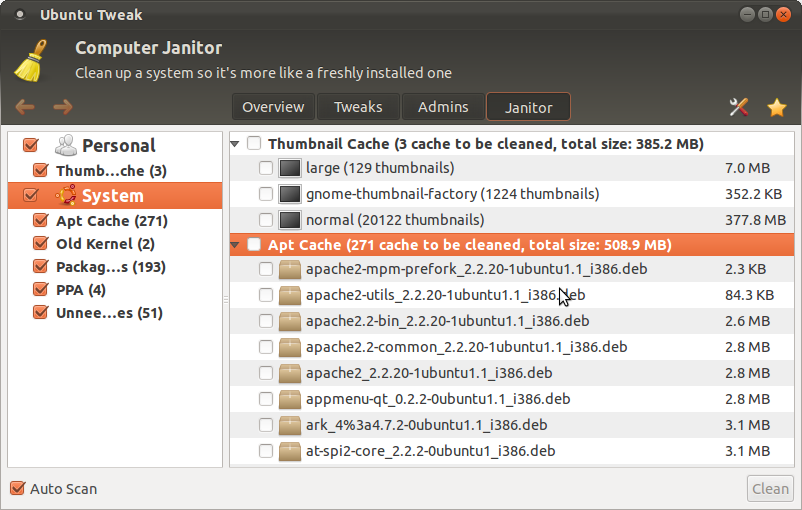 You can also remove old compress log files from the system

Lastly there is a GUI Tool (Thank Uri in the comment for this. I forgot): 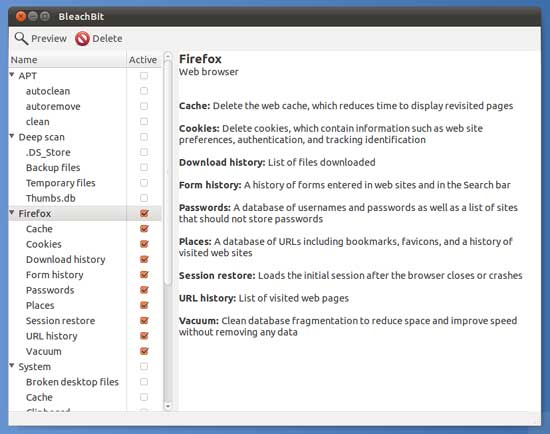 BleachBit is an advance cleaning utility for Ubuntu (Similar to CCleaner) and other distros that really, REALLY cleans the system. You can find it in the Software Center just by searching for bleach. What makes it different from the Ubuntu Tweak is that it searches for many common folders that many apps use to store cache/temp files. Apart from that improves a little bit the performance of browsers (since it cleans them out too) and libreoffice. There are a lot of more stuff BleachBit does but go to the site for more info. +1 Uri for the reminder.

Note that this is usually done every so many months or years, not everyday or every week like in Windows. Linux and Ubuntu have a unique way of always been optimized for this type of "problems". And before you ask, Fragmentation in Ubuntu is a very hard thing to do. Fragmentation at the level we see in Windows takes many months, even years so a fragmentation of 2 months in Windows (And the slowness that comes with it) is roughly like 2 or 3 years in Linux (and even then is not slowed down like in Windows).

For a general check I have 2 1TB hard drives, one is 0.91% non-contiguous and the other is OMG!! 1.2% non-contiguous... after 2 years of everyday, constant use. So am guessing in 2050 I will eventually have to "defragment" the hard drive, unless I bought a new one or formatted the existing one ;).

For battery performance, it is known that the following tools do help:

It can save several minutes/hours of battery usage, increasing life of battery and performance of it. 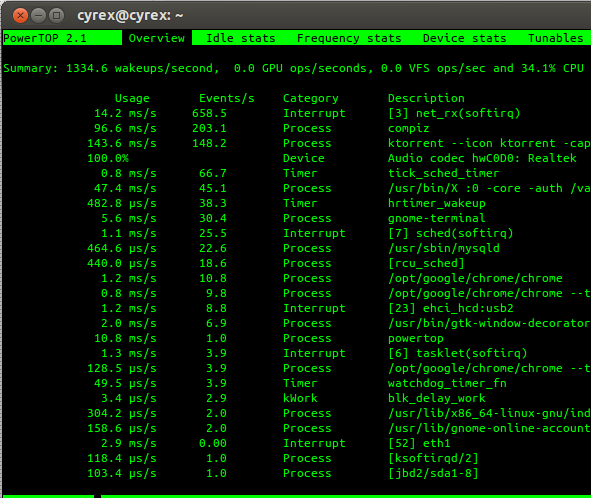 (NOT available/needed since 13.04) Recommended reading Is there a power saving application similar to Jupiter? It manages much better the battery usage and it gives longer battery time.

To run: Type jupiter in Dash or use the Jupiter Applet icon in the top panel.

It is a good power management tool to monitor Watt usage:

To run: Just reboot, it will start as a service.

The only downside is that you need to tweak the configuration file in order to get the most out of your battery, but using tools like powerstat can let you know easily if you are optimizing it right or wrong.

Cleaning is not necessary, but for the meticulous among us it's highly recommended ;)

An Ubuntu system does a good job of cleaning everything unnecessary, but from time to time the administrator has to weigh in...

An apt-get clean to remove old package download archives once in a while doesn't go amiss, I'm not sure there's anything that does that automatically.

Logs will be handled for you by logrotate.

/tmp is cleaned out for you on every reboot.

actually, it does need cleaning up, quite often in my opinion, the best app for that is bleach bit, its a little like the famous CCleaner on windows, Bleachbit is in the software centre

cleans up your firefox cache, apt cache, empties trash etc etc, it should come peinstalled in ubuntu to be honest, if you have been running your system a while, you could potentally free up hundreds of MBs on first run of bleachbit 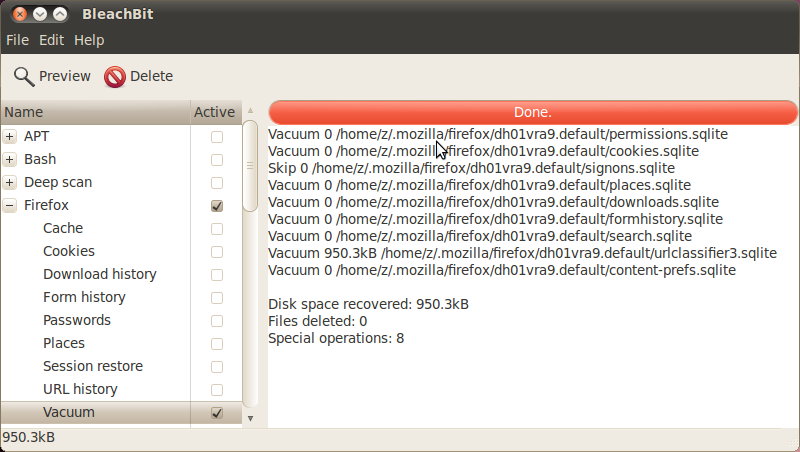 hello IMHO ubuntu does need that too with time pass you install/remove things lets say you ll have some config files that you dont need anymore beside that some orphane packages of course some thumbs ... , you can try bleachbit

Ubuntu and other flavors of Linux don't really need cleaning up as you might do in Windows. Over time, of course, you might accumulate things on your computer that you might not wish to keep - old documents, no-longer-used programs, etc. - but there is nothing really akin to the Windows registry that simply builds up clutter that slows your computer. The old stuff you save won't slow down your computer: it will probably run as fast a year from now as it does today.

I go through things from time to time to keep things neat and clean, because I like being organized, and that includes getting rid of old stuff. However, unless I decide to change settings or remove startup programs or something like that, my neatness obsession doesn't affect my computer's performance.

Not the answer you're looking for? Browse other questions tagged maintenance or ask your own question.

4
which software to use for cleaning up files and increase performance of a computer under ubuntu?
0
Alternative of CCleaner in Ubuntu 13.10
-2
How to clean Linux and get it back to its original state?
0
Troubleshooting Software to Show / Solve All Ubuntu problems at once?
190
Is there a power saving application similar to Jupiter?
0
My sda1 is almost full. How to clean it?

0
Five years old Ubuntu system - dist-upgrades always went fine, however some tasks remain
2
Why is my system becoming gradually slower and how should I fix it?
0
How can I maintain my system without a root password?
0
How to reduce software that is running during idle desktop state, and not needed otherwise?