Yesterday I was booting up my computer and it gave me this error message: 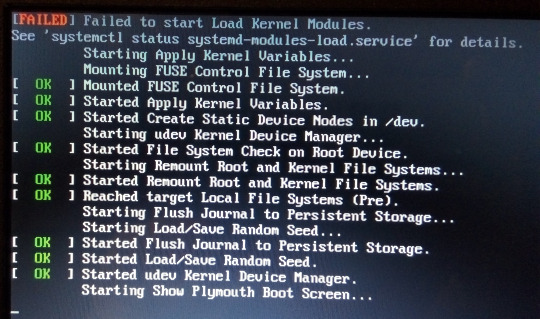 I was searching for a solution and came across this forum discussion : https://ubuntuforums.org/showthread.php?t=2326216

So then I booted into recovery mode from the grub boot menu, as someone suggested and then try to run $ sudo apt-get update.

Here is where I started struggling. I cannot get my computer to connect to the internet.

So then I tried to run $ sudo dhclient eth0 but it returned this error message:

How can I fix this?

OP solved their problem as follows:

[FAILED] Failed to start Load Kernel Modules was a red-herring. rtc is an obsolete module. The error message was removed by switching to tty1 (ctrl+alt+F1) and commenting out rtc (putting # at the start of the line) in /etc/modules (using sudoedit).

Now the computer would just boot to a blank screen.

Again in tty1, I then tried to connect to the internet, but sudo dhclient eth0 gave me this error message :

It turned out broken symlinks were to blame for that so to fix it:

So then it was possible to do sudo dhclient eth0

ping google.com returned unknown host google.com but ping 8.8.8.8 worked fine, so this was fixed by doing echo 'nameserver 8.8.8.8' | sudo tee /etc/resolv.conf as advised by steeldriver in this comment

With internet connected at last, all problems were fixed by running:

Not the answer you're looking for? Browse other questions tagged boot networking grub2 kernel or ask your own question.