How to install LBP Printer driver in Ubuntu 16.04LTS?

I installed the canon lbp2900 driver in Ubuntu 16.04LTS as above instructions. But when I run sudo make -f ./OS_restart.mk command, I get restart fail error message. And I go last command is ok sudo make -f ./install.mk BITS=64 PRINTER=LBP2900.

And then I checked systems setting - printers. I see lbp2900 driver and print testing page click. Printer status show "sending data to printer" but printer is not working and silent. 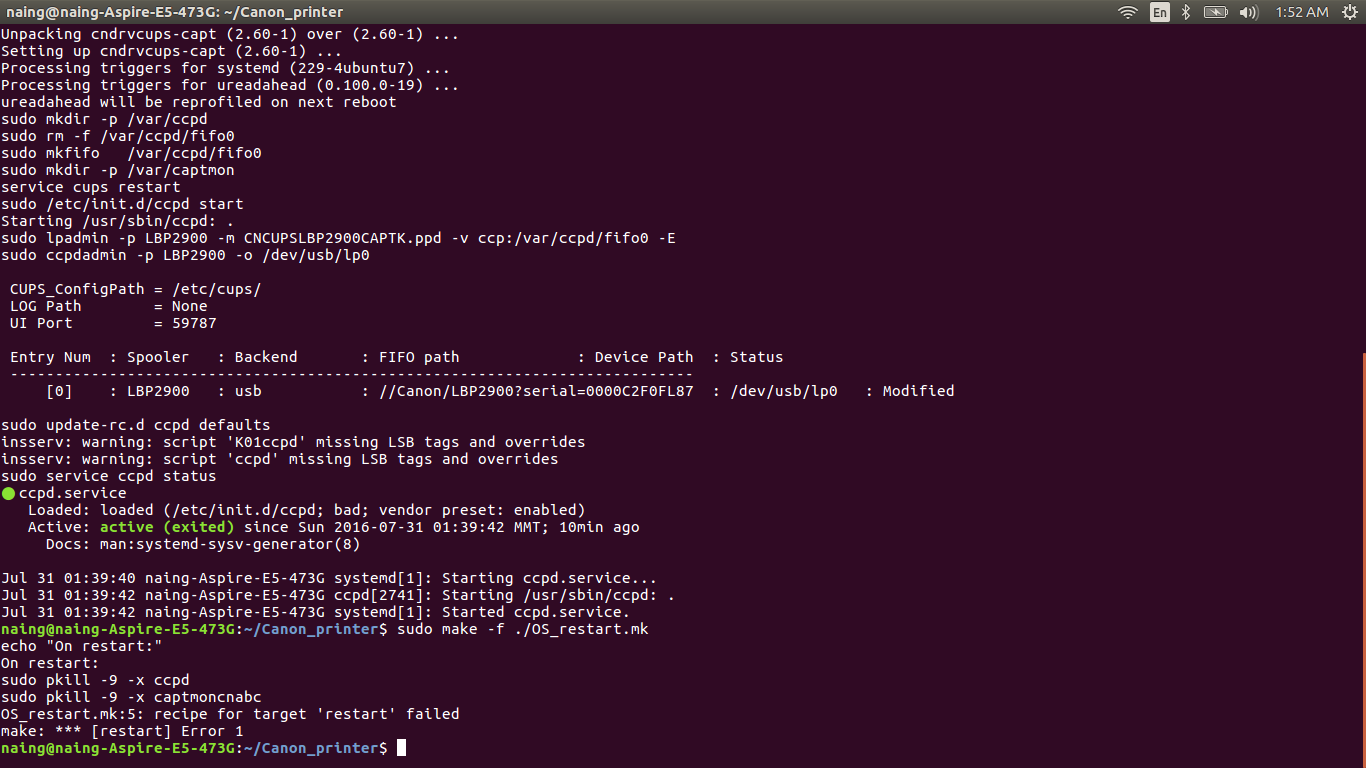 Here's what worked for me

but the printer did not work, then installed everything that was missing from here https://help.ubuntu.com/community/CanonCaptDrv190#A64-bit_Systems

after that captstatusui -P LBP2900 showed ready to print and I was able to print :)

Canon supply a 64bit driver; just use that; it works well, as detailed here

(Canon must supply all dependencies now as the 64bit driver is fine);

..... you just need to start the ccpd daemon each time you start the computer with the command sudo /etc/init.d/ccpd start

This tutorial made my Canon LBP2900B printer work in Ubuntu 16.04 LTS:

After clean installation of Ubuntu 16.04 my Canon 2900 refused to print. I found out a solution and will now share here with my experience.

The next step was to choose between the 32- or 64-bit driver. First my decision was to use 64-bit driver, because my OS is also 64-bit. But it was a mistake, 64-bit driver refused to work. So I choose 32-bit driver, unpacked and installed two packages in the following order:

Then I registered the printer in OS by taping in the terminal:

After the printer appears in menu I marked him as default by right click. All these time the printer must be turned off.

Then I reboot and printer start work.

But after that appears a new problem. When I shuttdown my computer it hangs during 5 minutes. It was caused by ccpd service. So I run:

and it shows that the delay was shorted. Next reboot took only several seconds.

Not the answer you're looking for? Browse other questions tagged drivers 16.04 printing or ask your own question.