Skype group chats are not showing

For last two days I'm experiencing an issue. I'm not getting any chat text from the Skype groups I'm added to. Though I'm getting chat text from individual contacts. As well as if I create new skype group and add other persons from my contact then I'm getting the chat texts but if someone adds me in a new group then also I'm not getting the texts. Another thing is, though my status in Skype is online still everybody in my contact list is seeing my status as away.

I've already tried reinstalling the Skype app but the same issue is still there.

Skype group chats will not work on the current version of Skype (It is a known bug reported on their forums for Linux users & other places). You can voice talk, but typing something or having actual access to the chat will not work.

With that said, the Skype for Linux (Alpha Version) will work (Confirmed by me). You can send text, images and other normal stuff done on the chat (Be it 1 to 1 or group chat). The options you get are "Send Photos and Files" and "Send Contacts". I have uploaded an image where you can also see a group of 8 I was chatting on while also having the option to upload (Using Ubuntu 16.04)

Note that, although it says "Alpha" it works much better and has more features than the "Current" version found on Ubuntu 16.04 and previous versions. Each incremental update to Skype in the past was simply making things worse. The Alpha version is here to solve all issues (I hope). 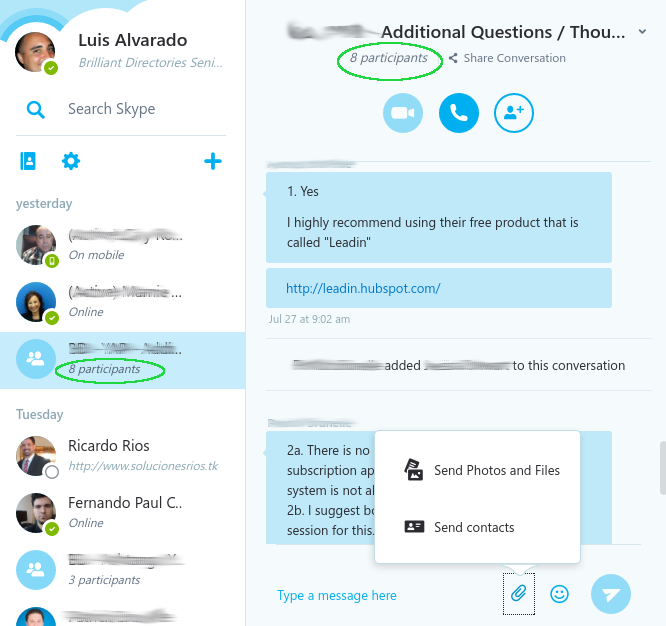 This person tried to contact you but there was a problem connecting the call, try calling them back.

This is because Skype Linux 4.3 clients always use p2p and the Alpha version does not support this. Because of this you cannot establish a call between Skype 4.3 clients and Skype for Linux Alpha.

You can start a group video call from Skype on:

Notably missing from this list is any flavour of Linux client which leaves out Ubuntu. Rather than giving up you could try:

A) Running the Windows version under Wine or under Windows installed on Virtual Box.

B) Skype for Web Which is reported to work from any computer.

C) Another possibility as pointed out by @edwinksl is Skype For Linux Alpha. It's not reported as fully functional as of now, but that could change.

I have encountered the same problem and I found the solution in Skype forum:

To check your connection status, type the following commands in any chat window

What was happening was that /dumpmsnp command was showing LoggedOut, but I was online and talking almost normally (except group chats).

To solve this LoggedOut issue, try this on any chat window:

and restart your Skype. After restarting, /dumpmsnp output shows the following status:

This, solved my problem, it showed the chat window and I bookmarked it for ease. I hope this helps.

Besides the other solutions:

You might be marked as "away" because you are logged in on your phone, which will set your status as "away" all the time.

Not the answer you're looking for? Browse other questions tagged 14.04 skype or ask your own question.

2
Is there any REAL Skype alternative where I can add my Skype friends (without asking them to join to a new app)?
0
Recent Chats and Bookmarked Chats sub-menu is not visible on Skype AppIndicator
2
Skype: show previously hidden chat; show text in recent chats
1
Unable to see Recent Chats in skype 4.3
12
Skype 4.3 screen sharing in group call
7
How should I see the skype chat history from the file main.db located at ~/.Skype/SKYPEUSERNAME/?
0
Group Chat of Skype in pidgin
1
Skype not showing people online on ubuntu?
0
How to send SMS on the Skype for Linux 8.10.0.4?