My laptop came with 14.04 (Trusty Tahr) LTS. Since then, I have made no significant changes, and I have been applying updates whenever I was notified of them.

On 2016-07-15, I was applying updates as normal, or so I thought. The "Software Updater" pop-up window had got as far as "Configuring shim-signed", when I got this "Debconf" pop-up: 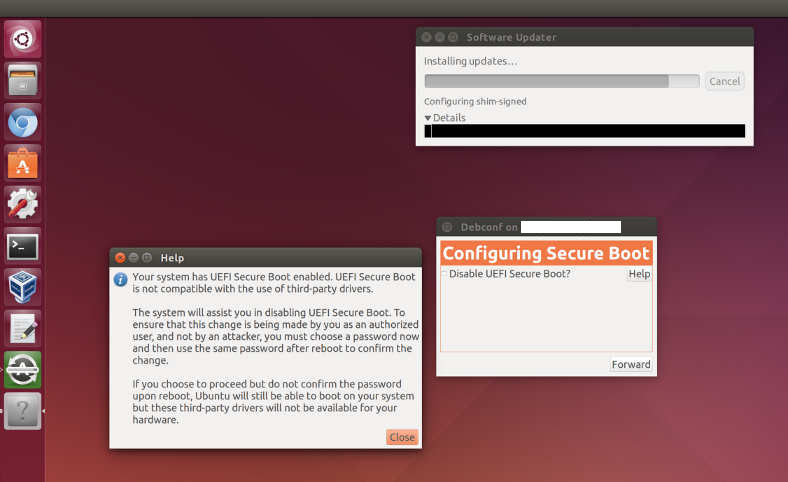 As you can see it:

I have never seen this before. I clicked on the "Help" button prior to taking the screenshot, which brought up the 3rd pop-up that you can see.

Just in case anyone searches by any of these phrases ...

If I remember correctly, ...

Note01 - I looked in my BIOS settings (for the first time on this laptop). Secure Boot appears to be enabled. If "Debconf" had been successful in disabling UEFI Secure Boot, would that have been reflected in the BIOS settings?

ATTENTION: Due to an unavoidable ABI change the kernel updates have been given a new version number, which requires you to recompile and reinstall all third party kernel modules you might have installed. Unless you manually uninstalled the standard kernel metapackages (e.g. linux-generic, linux-generic-lts-RELEASE, linux-virtual, linux-powerpc), a standard system upgrade will automatically perform this as well.

(I am just a user and I don't really understand this. Don't we always get a new version number? And don't we always have to recompile & reinstall - a process managed by DKMS or something?)

Note06 - It seems that someone who is on the trusty linux-lts-wily LTS enablement stack (kernel version 4.2) may have got the same pop-ups, the day before me, but without encountering any subsequent problems.

Could it be that now, in July 2016, Ubuntu has introduced new Secure Boot requirements to 14.04 LTS? If not, what is the problem I'm having with 3.19.0-65? And either way, what should I (and the other people having problems) do about it?

You are correct. The Canonical Kernel Team has enabled EFI_SECURE_BOOT_SIG_ENFORCE in the new 3.19 Ubuntu kernel.

It looks like there is a script with GUI that is supposed to help to disable Secure Boot.

It did not work in your case. It depends on specific UEFI implementation in your computer.

But you can simply disable Secure Boot in your UEFI settings.

See this answer and comments below.

99
Why do I get "Required key not available" when install 3rd party kernel modules or after a kernel upgrade?
48
Why disabling "Secure Boot" is enforced policy when installing 3rd party modules
3
Is this how I tell whether or not I have "third party drivers"?
3
debconf uefi disabling almost breaks system
2
Dell XPS Developer Edition - upgrade breaks wifi