Does anyone have experience with the XFX Radeon HD 6870 on Ubuntu 11.10? I've Googled and the best I could find was someone getting the card to 'work' on Linux. Nothing specific about Ubuntu and this card.

If yes, was it very complicated to get working?

Or has someone used this card with an older version of Ubuntu?

Note: I do not have the card yet, I am debating buying it, but would like to know beforehand because there is a restocking fee if I have to return it.

I have the exact same graphics card, and I have had good luck with it so far. It works out of the box with the built in radeon driver. That driver supports the card surprisingly well. 2D & 3D acceleration works to some extent (including smooth performance in Compiz and Gnome Shell), but you'll have less luck doing 3D games or the like. On the bright side, Minecraft doesn't work very well with the free driver :b

So, to gain those other things (including making Minecraft work very, very well) you can install the properietary fglrx driver. This is available right away from the Additional Drivers tool. Just open System Settings and Additional Drivers will be listed in the Hardware section. 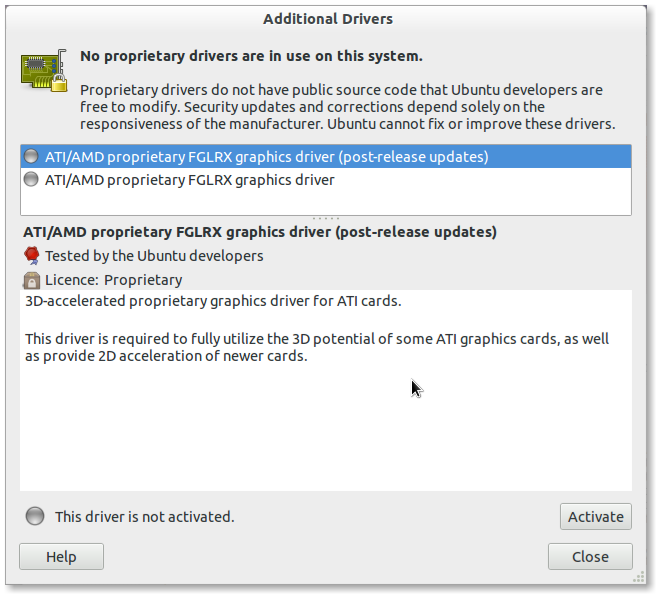 The fglrx driver does good 3D acceleration and all the bits in between. It definitely meets the two requirements you listed, as far as I have noticed (though, to be honest, I don't think I have played a full-length 1080p video thus far; just little things). Unfortunately, the fglrx driver isn't quite perfect. It has a bug that breaks Gnome Shell, so that's why I'm currently using the built in driver. If you don't care about Gnome Shell, that bug won't be a problem.

It's pretty unusual that video playback in Ubuntu will use the video processing hardware built in to the GPU, so any claims of "1080p video playback!" are probably not so clear-cut. The video hardware in the Radeon HD 6800 series can be accessed through VA API, which is still somewhat new. We're still waiting for VA API support to land in GStreamer (the standard media framework in Ubuntu, used by the default Movie Player), but you might have luck if you install the VLC Media Player, which reportedly does VA API right now!

As I know Ubuntu can download, if the videocard manufacteur made, the software for graphic or whatever. But in general you don't need any driver to watch hd videos and set the resolution. I have an acer with ubuntu and i don't have any video driver and it works fine everything, even better that worked in w7.

Not the answer you're looking for? Browse other questions tagged 11.10 video radeon or ask your own question.