I've upgraded my laptop (Lenovo Z50-70) which has an i7 CPU and 8Gigs of Ram to Ubuntu 16.04 from 15.10. I've been installing updates consistently. I'm using ubuntu with Gnome desktop environment (GDM).

Lately I've been experiencing a weird problem, my CPU (including all 4 cores) are 100% used by some processes like gnome-software(Gnome software) and fwupd(Firmware update daemon). This makes my work goes down. If i even kill those processes, they are starting back again.

Is there a solution for these processes to not utilize 100% of my CPU. And I don't want answers saying use the cpulimit utility to provision the amount of CPU for those processes. I find this a core problem in Ubuntu, i'm expecting real solutions for the problem.

What I've tried so far is, Removing those PPA's i've added except the official PPA's for checking updates. That didn't work out! Attached a screenshot of htop screen of these processes. 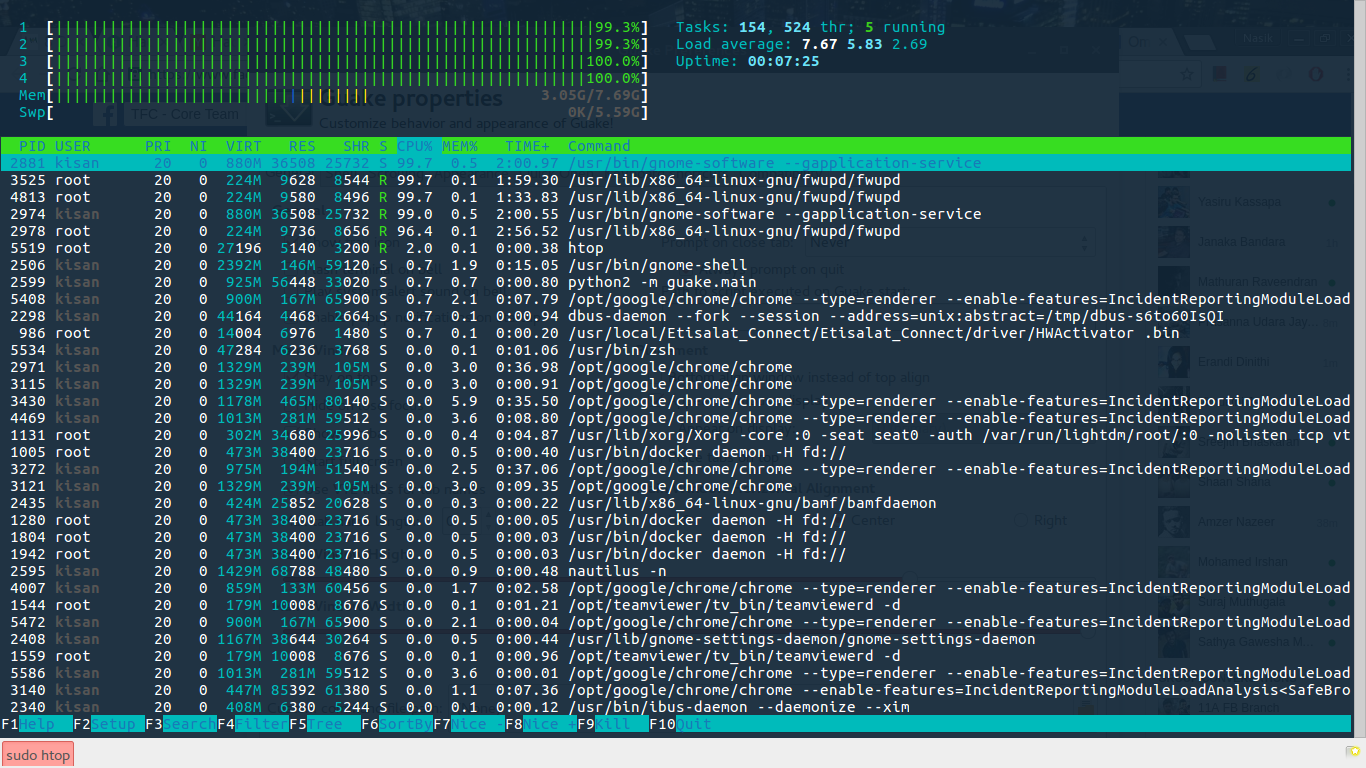 Had a similar issue.

As the other answer mentioned - it is possible to determine the problem by looking at /var/log/syslog.

In order to fix this I ran the following command, replace USER with your username:

I had exactly the same issue, same processes taking 100% of CPU. What worked for me was to upgrade software in my Ubuntu (16.04):

After that I rebooted my pc and now the issue is gone.

I managed to solve it by checking syslog (/var/log/syslog). It was logging like crazy that it couldn't create the file /home/<my user>/.cache/dconf/user. When I gave this folder the correct permissions, it stopped using this much CPU.

Permission Problem for me.

Executing this command, the problem solved.

There can be a case when there's nothing in the syslog related to the service, in which case you may want to simply restart it. To avoid looking up services and killing them manually, you can just use systemctl:

This problem with fwupd happened to me today on one computer. I also had two instances of gnome-software running. In all, 2 CPU were clamped at 100%.

To quickly stop that mayhem, I could just kill those 3 processes:

(You may also try killall gnome-software and killall fwupd, I just find that killall command dangerous... Otherwise, in htop you can just use F9. Before confirming, make sure the correct process was selected!)

Now, @belacqua pointed us out to the following bug report on launchpad:

The person says that the problem is not reproducible, but if you had problems with apt-get (as in, software update / installation) then it may very well be because of that. And indeed, I had several files in the apt cache that were total crap (i.e. my Internet connection failed a couple of days ago and some of the cache files included an HTTP 302 error instead of the expected package lists.) I find this specific comment interesting because a bug is still there, but not due to the yaml file as specified there. In my case, I could not find any yaml file anywhere.

I'd bet that by fixing the apt-get cache, I fixed the problem. It looks like the code was fixed a while back already. I just need a reboot to confirm that this 100% CPU usage does not occur again.

Same problem with me, it also blocking my system.

After change owner of /home/{user}/.cache/dconf/user, it looks normal.

kklucaskklucas
1
Add a comment  |
Highly active question. Earn 10 reputation (not counting the association bonus) in order to answer this question. The reputation requirement helps protect this question from spam and non-answer activity.

Not the answer you're looking for? Browse other questions tagged gnome updates software-center cpu cpu-load or ask your own question.