How to start applications such as xcompmgr at start up? [duplicate]

I've been trying to make xcompmgrto autostart in Lubuntu 11.10 but it just doesn't, I have to start it manually.

I have added the next lines to the autostart script in ~/.config/openbox/

But whenever I log in it doesn't do anything, I don't really need any special parameters for it I just want it to start at log in.

How can I make it run automatically at login?

First create the autostart folder if it doesnt already exist:

Then create a xcompmgr desktop file 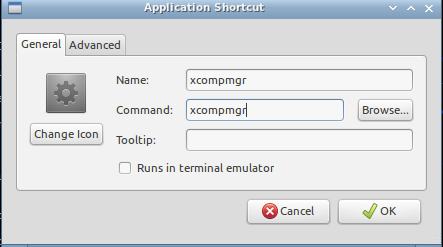 N.B. this picture shows what the xcompmgr.desktop file contains as well how to confirm xcompmgr is running.

Yes "xcompmgr" alone does nothing. You need to tell it what kind of effects you want, which is what all gibberish at the end of the command is for.

edit: Here's an explanation for the options I'm using:

"-cfF" "c" is for soft shadows and transparency support, "f" for fade in & fade out when creating and closing windows, and "F" for fade when changing a window's transparency.

"-D6" the time between each step when fading windows is set to 6 milliseconds.

"&" isn't actually xcompmgr's option, it's a built-in function in the shell itself, sending the command to run in the background.

Just in case the dropbox link is not available:

add a file xcompmgr.desktop to the ~/.config/autostart with the following settings:

Save, restart your system and you should be compositing.

36
How to add startup applications in lubuntu?
102
How to prevent my screen from either dimming or the screen-lock starting when watching YouTube?
66
Are there any tools for drawing on the desktop (drawing over apps)?
9
How do I stop the screensaver from turning on when watching videos online?
5
How to stop screensavers when playing a video?
2
Lubuntu battery monitor always says 100%
1
Where is the xcompmgr file located?

2
How can I run Openbox using the GNOME/Openbox session?
0
Why does Openbox on Gnome give me an empty desktop?
5
Lubuntu: How do I autostart xfce4 power manager?
0
why conky and docky doesn't start automatically at lubuntu
1
Failed to execute child process "palimpset" (No such file or directory)
3
Lubuntu 16.10: How to make login through greeter without typing password work
0
How to launch PCmanFM-qt with [Super]+[E]
1
How to start a gui app within an openbox window outside of its autorun file