How to set the screen resolution in Ubuntu 16.04 64 bit running under VMware workstation 12 player on a Windows 7 host?

I can set the screen resolution manually once I log in using the following command:

but I am not able to make it "stick". Every time I log back in, the resolution for a little while changes to 1360x768, but by the time the desktop appears, switches back to 800x600.

I have also tried other versions of the command, if that matters. For example, xrandr --output Virtual1 --mode 1360x768. It works as long as I don't exit the current session, but switches back to 800x600 when I log back in.

I have tried the following:

Any ideas what else could be done?

I wrote here before, a clean install of ubuntu has no problem with resolution. But after that I found the solution while I was looking for an answer for another problem.

Follow the steps below and everything will be fixed. If you have the latest VMware Tools and open-vm-tools is not install, the skip to step 3.

Hope this helps. I know how frustrating it is to try and fix this.

If you are using Ubuntu on VMWare Workstation, you need to install VMWare tools to get proper resolution.

Here is the step by step procedure to do that :

Changing the resolution requires the VMWare Tools, or the open source equivalents. I've found the Open Source versions to work a little better than the compile-them versions that ship with VMWare Workstation.

Install the Open VM Tools, with the following commands. Note that if you've installed the VMware Tools already you need to uninstall those first.

Once this is done fully shut down the VM, then start it up again in Workstation.

You can then see a larger set of resolutions in the GUI as you would for a standard computer, or use VMware Workstation's "Autofit Guest" and "Fit Guest Now" options with the Desktop Open VM Tools to autoadjust the resolution.

This is confirmed working on VMware Workstation machines, as well as VMware ESXi virtual machines accessed via VMware Workstation, on Ubuntu, Lubuntu, Xubuntu, and Kubuntu 16.04 LTS machines that I personally have been running, and it works nearly flawlessly (make sure you give enough vRAM to the VMs, because it takes the Video RAM from that virtual RAM allocation you give by default...)

You should be able to do the same for your resolution:

It no longer seems to work on 18.04, though (it changes and then immediately switches back). In that case, add the above to an executable .sh file and add a new entry calling it from Ubuntu's Startup Applications: 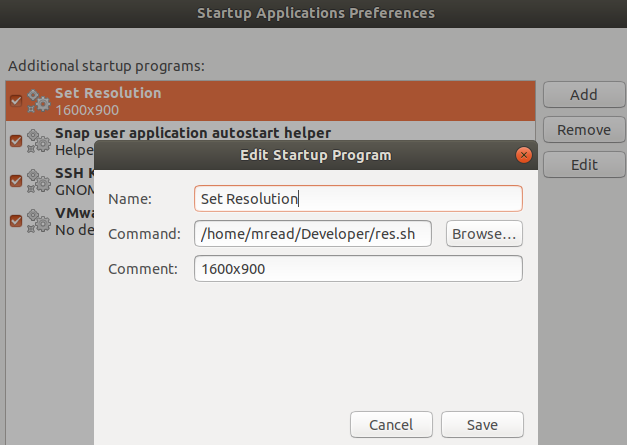 I had the same problem, annoying but finally fixed using a variation of the first suggested answer above.

Fusion is running on MacOS 10.12.6 on MacBook Pro with Display Preferences set to "Default for Display"

I noticed after the reboot everything looked perfect, came back up with my 1920x1200 resolution but continued with the suggested final steps:

Came back up with the tiny 2560x1600, changed and saved to my preferred resolution and logged out and back in (actually just jumped back to my Mac desktop and back again as that would revert the settings as well) and Ubuntu reverted to the 2560x1600.

So the final fix while in this state (running only VMware's tools with open-vm-tools-desktop) is the following:

Works like a charm and so far haven't noticed anything missing or lost functionality due to not having the open desktop tools installed, seems that VMware's tools give you everything you need and works.

Edit your VMX to include:

Not the answer you're looking for? Browse other questions tagged 16.04 display lightdm vmware display-resolution or ask your own question.