How to merge subtitle to video?

How can I merge subtitle to a movie to play on my android TV?

I searched for a long time but almost program no longer work on ubuntu or I can't find the repository . Here is some answer but I think it's no longer supported on 16.04

If your TV can play movies that have subtitles muxed into the same file as the video, there are many advantages to adding the subtitles as a subtitle track, instead of burning them into the video.

That will include all tracks from the mp4 (video, audio, chapters), and subs from the srt as a text subtitle track. It takes about as long as copying the file, since it doesn't have to decode/re-encode the video.

Ubuntu packages mkvmerge in mkvtoolnix. There's an mkvtoolnix-gui package, with a gui frontend. It has a lot of options to let you control things like the subtitle offset.

The major advantage to this is that you avoid degrading the quality with another decode/encode cycle of generation loss. It's impossible to avoid losing quality when transcoding, and it takes a lot of CPU time to even come close to the quality-per-filesize of a well-encoded source. (e.g. x264 with -preset slower, or if your player supports it, x265 if you're willing to spend a huge amount of CPU time to make smaller files that still look good). If you don't care about file size because you're just streaming it to your TV, transcoding with x264 with -preset veryfast -crf15 can run quickly and lose minimal quality.

Another advantage to muxing subs is that you can then toggle the subs on/off, or have your player show them in a different position on screen.

You can also extract them later and search them if you're trying to remember a line from the movie.

You can even extract them, fix typos, and mux them back in.

I use Hand Brake on my ubuntu 16.04 great application and very simple to use . https://launchpad.net/~stebbins/+archive/ubuntu/handbrake-releases

I think that MKVToolNix is the simplest and easiest-to-use free tool available for you to merge a video file with a subtitles file. Just install it by e.g. running a terminal/shell command such as:

...and then run it, right-click the Source files area in order to add your video file and your subtitles file (step 1, at the picture below), specify the location of the destination MKV video file (step 2) and then click on Start multiplexing (step 3). Done. 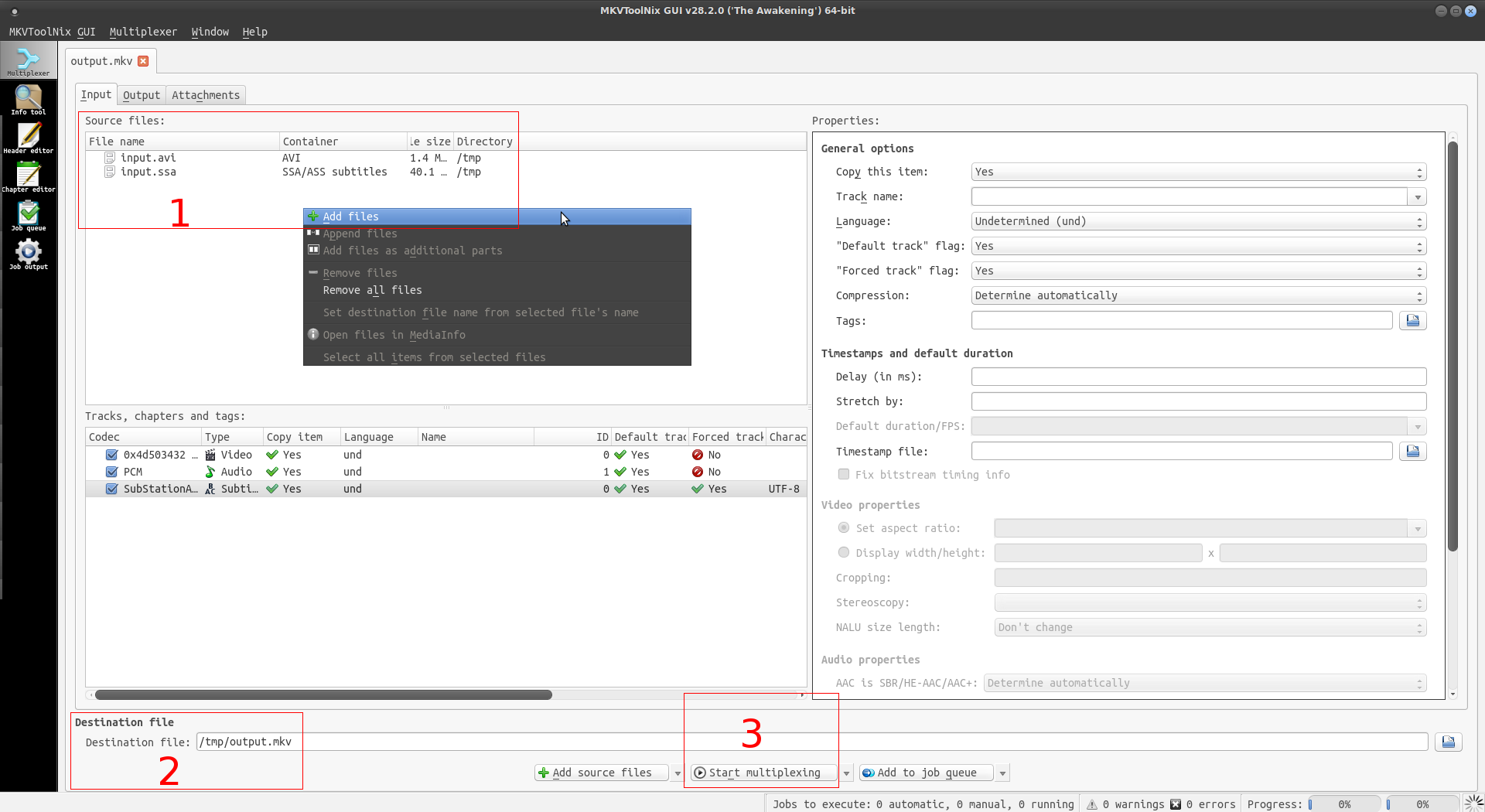 MKVToolNix muxes/multiplexes the subtitles track/stream along with the video track/stream. This means that the output MKV file, like e.g. ~/Videos/output.mkv (the ~ character is a shortcut to your home account folder, e.g. /home/your-account/), will be a video file that contains subtitles embedded in it and you will be able to turn the subtitles on and off, while such MKV video is playing.

What if you want subtitles "fused" (hardcoded) in the video, instead of just muxed/multiplexed?

In such case, a laborious-yet-rewarding approach consists on (1) converting your subtitles file to the SSA format, (2) editing the SSA's Style line and then (3) using avconv (Ubuntu version 17.10 or previous) or ffmpeg (Ubuntu version 18.04 or later) to merge/hardcode such stylized subtitles into the video track/stream (the subtitles' characters will then be converted to pictograms or graphical symbols, i.e. pixels not only "laid over" the video's pictures/frames but replacing such pixels).

Here's how to do it:

It now works without converting to .ass on Ubuntu 20.10

They's enabled libass support recently it seems on the package, so now you can just do:

Before it was enabled, you needed:

You can check for libsass support with:

The generated output can be seen at: https://www.youtube.com/watch?v=Q0nVA3mYXLU 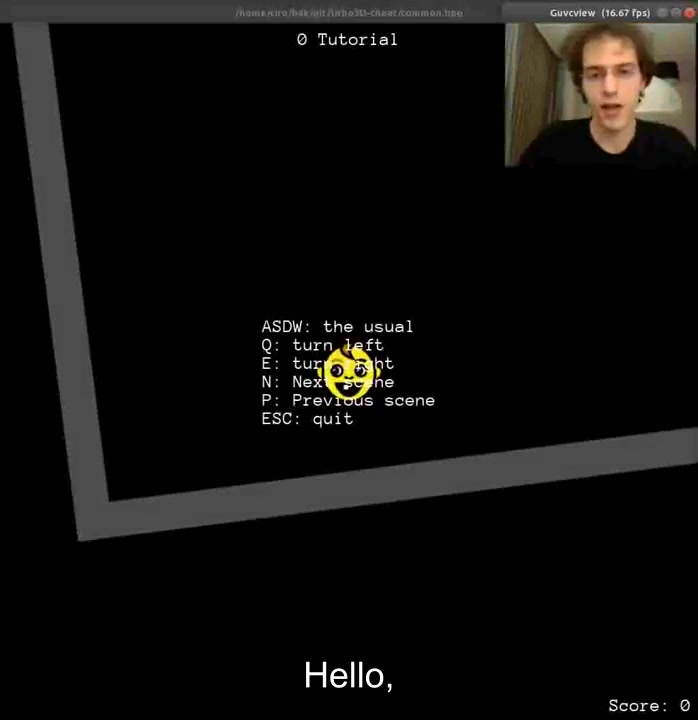 The test files can be obtained with:

10
Insert subtitles permanently and convert video
15
How do you install avconv on Ubuntu 18.04?
8
Subtitle editor for 16.04

3
System logs out on video playing in Full Screen
1
How to convert .avi video to .mp4(for Motorola Milestone, Android 2.3.4) with Avidemux
5
Saving subtitles found by the VLC extension "Subtitle Finder"?
16
How to change the framerate of a video without reencoding
0
VLC can't play large raw avi 1080p video
2
How to install `gstreamer0.1-ffmpeg` on ubuntu (17.10) artful?