Where does GNOME 3 store panel orientation?

What file does Gnome3 (without Unity) store the top/bottom panel "orientation" settings in? This sort of thing used to be available in the gconf-editor under apps/panel, but there doesn't seem to be anything about panel orientation there anymore. Where can I find it?

I don't even have a ~/.gconf/apps/panel directory, so I can't reset as described in this other question (probably Gnome2 info). I have ~/.gconf/apps/panel3-applets and ~/.gconf/apps/gnome-settings/gnome-panel, but neither of them has anything about panel orientation (the former just has applet config, as you'd expect; the latter just has a %gconf.xml containing only run history). I even removed my ~/.gconf directory entirely (well, okay, I renamed it) and rebooted, no change. Clearly not stored in there. Nor in ~/.gconfd.

Background: I moved everything to one panel (prefer not having top and bottom), then thought I'd try docking it to the left to see what that was like. What it's like is: Non-functional. When I first log in it shows, but trying to do anything with it makes it disappear. Unfortunately, one of the things that makes it disappear is trying to access the Properties dialog to dock it somewhere else...

Update: Okay, this is just weird. First I looked at all files changed under my home directory at about the time I made the change. No luck. So allowing for some poor programming, I've now looked at the name of every file found by the following command issued from the root of my file system:

...which did (when I ran it) encompass the relevant timeframe (and quite a bit on either side), and for any file that looked like it could possibly contain this setting, I've opened that file and looked at it. Not a thing.

That leaves us with the absense of a setting defaulting to "dock left," which makes no sense at all.

I took a backup earlier (because I was going to be doing a lot of things to my system, mostly because I've given up on Unity, which is a great idea and may well get there in the end, but is just way too buggy / feature poor for prime time use yet). If I'd realized it was going to be this hard to undo this stoopid little docking setting, I'd've restored that backup 90 minutes ago. Crazy.

Settings for GNOME Panel are stored in dconf, now, and you can access them using dconf-editor under: /org/gnome/gnome-panel.

Stuff in dconf is stored in a binary format, which is why those options didn't show up in a search. 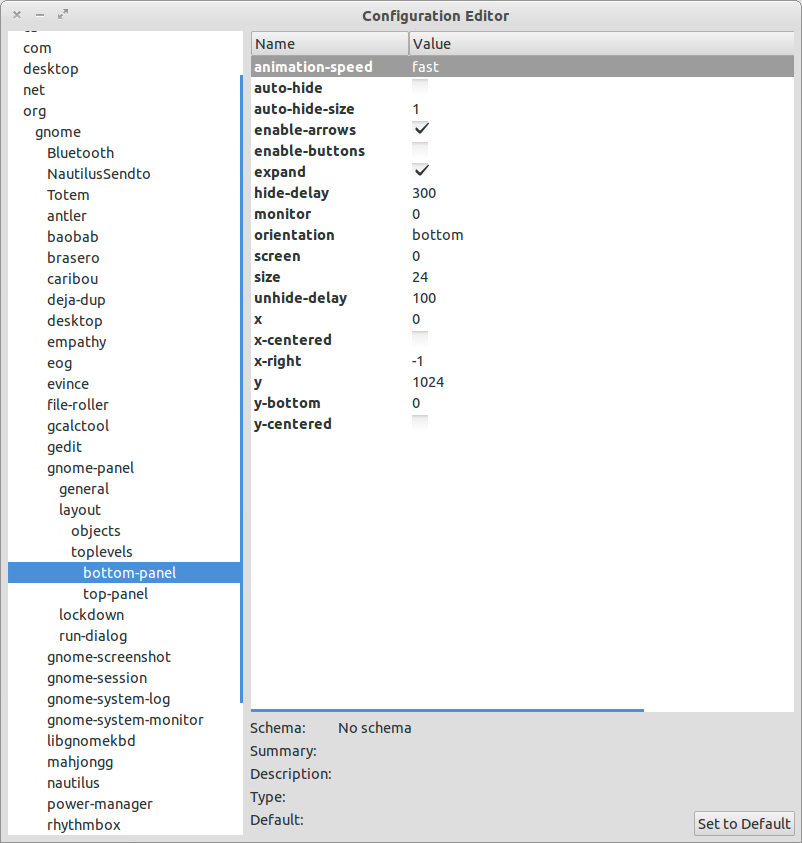 25
How to add panel applets to classic gnome panel?
59
How to customize the gnome classic panel
4
How Can I Set the Unhide Speed of the Gnome-Classic Panel?
0
Broken Gnome panel after update
3
Can't open Panel settings with super-alt right-click in gnome-classic after resize
1
Problem with minimized window to bottom gnome panel
6
Where does Ubuntu store Desktop Environment options
2
(Ubuntu 18.04) Music vanished from Nautilus 'Places' left sidebar, config file edit no help