Redshift/F.lux not working on Ubuntu 16.04

I have installed both Redshift and f.lux on my Ubuntu 16.04 machine to try to change the color temperature of my screen. I can open the apps, but neither of them has an effect on the screen color tone. On F.lux, when I try to preview the color temperature, nothing happens. Does anybody know what could be going on here? Why isn't this working?

Note, I am using an NVIDIA GeForce GTX 980 Ti GPU.

In a console type

then it just worked. I can even close and reopen it now and it works fine.

I tried to get both f.lux and Redshift to work without any solution so I just opted to go another route. So I went to the Ubuntu Software Manager and installed Night Light slider as pictured below. It works and certainly isn't making me die from strained eyes and a headache from earlier in the evening due to no sleep.

So I figured out how to use Redshift with my system. Basically, I was using the wrong display driver. When I went to the Additional Drivers tab in the Software & Updates app, I noticed I was using default Nouveau driver instead of the latest NVIDIA driver, and had the other tab set to "Do not use the device". 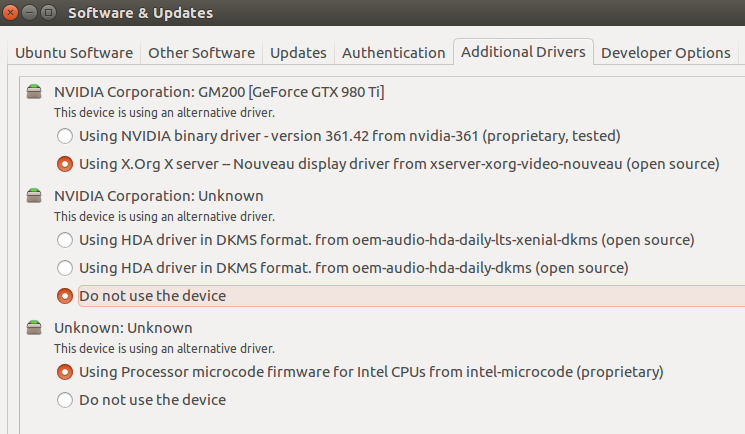 when I switched it to the NVIDIA driver tab and HDMA Driver with DKMS Format (daily-dkms) tab, and restarted the machine, it finally worked.

Redshift is time-based. It will change the color of your screen provided the following two conditions are met:

The f.lux website describes pretty much the same thing:

f.lux fixes this: it makes the color of your computer's display adapt to the time of day, warm at night and like sunlight during the day.

As noted above I ran the following to list the Locations that redshift can use to base it's color:

redshift -l geoclue2 which allowed me to start the redshift service and everything was working fine. I then moved on to making sure that it worked on startup by opening up 'Startup Applications' and adding the last command as a custom command there. By clicking 'run now' I was able to test that it still worked but also run it as a background service as opposed to directly in the CLI.

I just pause the f.lux and then un-pause it, and it worked for me.

For me changing the Adjustment Method in the settings menu from drm to randr made it work.

13
How do I remove screen tearing in 16.04 with nvidia GTX 960 M?
3
Redshift and flux f.lux both installed but no visible effect from either
4
Redshift/F.lux not working on Ubuntu 16.04 with Intel HD Graphics
6
Redshift/Flux/brightness-controller Stopped Working
1
GPU not working correctly after suspend (Ubuntu 16.04)
4
Alternatives for f.lux/redshift
2
ubuntu 16.04 fresh installation without integrated graphics, problem with nvidia geforce gtx
0
Ubuntu Login Screen goes black on Ubuntu 16.04, Cuda 8.0 and Geforce GTX Titan X GPU
4
F.lux or redshift and lubuntu issues