Ubuntu SDK: Having difficulty getting images to work in 'QML only app' when deploying to armhf device

When I deploy my QML only program to the desktop using the Ubuntu SDK, images that I have placed in the same folder as Main.qml can be accessed and displayed correctly in the application using source: "Pics/testpic.png"

What is the best method to get the click package to incorporate a folder of pictures into the binary where they can be accessed and used by the application?

If I change the source to a web address it will happily show any picture I point it to, so it's able to display images fine but doesn't have access to my own images folder.

There is a similarish question here

and koukouviou adds a footnote to his question:

I ended up creating a qmake project instead of a cmake project and achieved embedding the image in the binary. For my needs that's OK, since I'm just developing a simple proof-of-concept app

So 'embedding the image in the binary' sounds like exactly what I want to do.

Can anyone run through how to do this with me?

Just to note, I have attempted a number of 'stab in the dark' attempts at this.

Any help with this would be very much appreciated.

Edit: A Quick Outline of Where I went Wrong...

Thanks to koukouviou for steering me onto the right path.

My main problem was that I started a QML App with Simple UI(qmake) project. I put it together and tested it by deploying to the Desktop and when I was happy enough with it I tried deploying to an armhf Device. It was then that I found that the images wouldn't show.

I had no C++ code in my project so it seemed unnecessary to be using any of the 'C++' project Templates, so I made some attempts to 'fix' my problem but I was still using the 'QML App with Simple UI' project Template.

Adding a QT Resource file to a QML App with Simple UI project looks like it should work: the .qrc file can be added and populated with your images but any reference to source: "qrc:/Pics/testpic.png" failed.

As far as I am aware it is not possible to use your own Image files with a 'QML App with Simple UI' and deploy it to an armhf Device.

After reading koukouviou's answer I finally thought I'd just have to bite the bullet and start a project using C++ code. This time I chose QtQuick App with QML UI (qmake) which has the description 'Creates a C++ Ubuntu application project with a sample UI containing a Label and a Button'.

As previously mentioned, I had avoided this before because I had no C++ code in my application & no real understanding of how to use C++ in this (or any) context, but I was glad to find that it wasn't necessary for me to adjust or add any C++ code and I could just make my changes to Main.qml and add my Image files to the Resources. There was, in fact, already a .qrc resource file in the project tree by default.

This is what I did to embed an image in the "binary":

I'm using a qmake project with the default folder structure in Ubuntu SDK. I made a directory to store my images: project_name/backend/your_click/images. With the backend folder I created a new resource file resource_file.qrc that contains the following:

To create the qrc file I think you can right-click, Add New ..., Qt, Qt Resource File and manually edit the file, or manually create it from scratch. I don't remember which one worked for me, try them out and let me know, I will edit the answer for others that may run into the same problem in the future.

In my Main.qml file I use the image like this:

Here's a screenshot of my project structure, it might help. 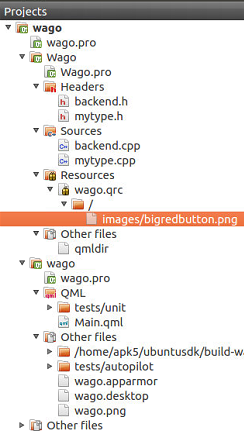 Not the answer you're looking for? Browse other questions tagged qt ubuntu-sdk qml sdk or ask your own question.

3
Add image files in Ubuntu QML app with C++ plugins (qrc)
2
How do I add a qrc file to my Ubuntu Touch qml project?