How to detect the number of opened terminals by the user

However, I want the shell prompt color to automatically change whenever I open a new terminal or tab. I am aware that the basic tty TERM has 16 colors, and it's okay to rotate the colors if more than 16 terminals are open. Will the solution also work when I connect through Putty, tmux or screen.

My idea is to write a shell script and place it in .bashrc which detects the new terminal session the user has opened and increment a global counter from \e[0;31m[ to \e[0;47m[. How to detect the number of opened terminals by the user?

Avoid relying on who's output, and looking for gnome-pty-helper processes, since these don't work in newer gnome-terminal versions.

Note that nowadays pretty much all graphical terminal emulators (including putty) and multiplexers (screen, tmux) support 256 colors. You can get really nice colored prompts if you use this palette.

My recommendation for a very simple solution is to base the color on the current tty line's number. E.g. process the output of the tty command to take the number only and derive the color from that. A certain tty line number is only given to one terminal at a time, you'd have to close that terminal first before the same line number is reissued by the kernel. This, combined with 256 colors, automatically guarantees that you won't see the same color twice at a given time (and even with 16 colors it'd give a quite even distribution). No need for maintaining a global counter, and no need for counting terminals or processes.

In a single user situation, if we take the example of xterm, we can simply count the number of pids of xterm; xterm creates a separate pid for each and every window.
gnome-terminal however runs a single pid, but the good news is that it creates a child process for each and every window and/or tab. we can retrieve these child processes by the command:

There are however a few complications to deal with:

To count the number of tabs and/or windows of a terminal application, we need to:

This can very well be scripted however, to reliably find the number of currently opened windows and/or tabs.

In the script below, the targeted terminal application is used as an argument. The script works on many terminals I tested it on. An exception is Tilda at this moment. 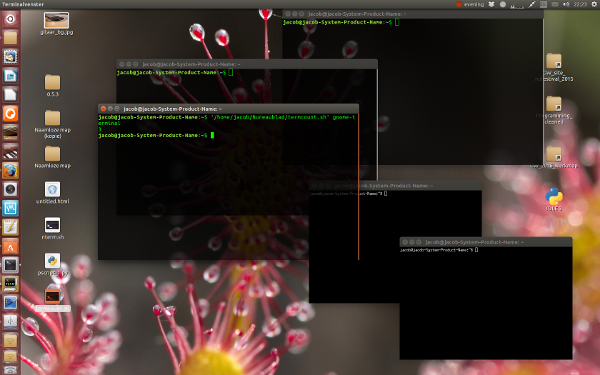 In above 1 liner command, awk is used to find the count of terminal. Inside awk program, it is just checking the number of lines return by who command - 1.

Simple way may be also just to run System Monitor (if started from Terminal you must write gnome-system-monitor) and under "Processes" tab arrange the running processes by Name and than count the number of occurrences of Bash in the listing (they will be all together if you arrange by name, so it's easy to count).

Note that you must look for Bash and not for Gnome Terminal if you want to see the number of opened terminals by user. Once you open a Terminal Gnome Terminal will also appear in the Processes list but will remain only one even if more Terminals are opened. The "View" button in System Monitor allows you to set which processes to see, eg. All Processes/User Processes/Active ...

Not the answer you're looking for? Browse other questions tagged bash virtual-terminal or ask your own question.