How to get back lost "Root CA certificates" & "Gnome 2 Key storage" after accidentally deleting file?

On 16.04 and using GNOME Shell not Unity, I wanted to import a *.pem for a custom root cert, but as the "Passwords & Keys" (seahorse) app said I had to unlock a locked keyring to which I could not remember the password (perhaps after the last update, or due to the change of shell?).

Following How to recover/reset forgotten Gnome Keyring Password? I have removed rm ~/.local/share/keyrings/login.keyring (which was the right thing to do?) and as that didn't work, it still asked for a password to unlock the keyring (did I just forget to logout/login?), I've then also removed rm ~/.local/share/keyrings/user.keystore (was that dumb?).

But now the Import button is greyed out when I try to import the *.pem, saying "Cannot import because there are no compatible importers" in a hover. 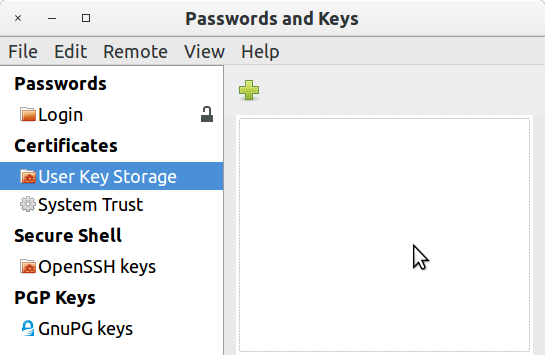 How do I get them back, so that I can import that *.pem?

I had the same issue after updating to 16.04

After removing the file ~/.local/share/keyrings/user.keystore the Gnome2 Key Storage that had an unknown password on it was no longer available. I had a hard time getting it to recreate itself as many people suggested would happen.

This morning I verified that the file was missing and the ability to import keys was non functional. I rebooted the computer and the Gnome2 Key Storage has rebuilt itself.

While in "Passwords & Keys" I clicked on the unlock button and presented with the password prompt that has been having issues. I entered my logon password and it presented me with a failed message. After closing out the window I noticed that the folder was now unlocked. I imported a key, locked the folder, and the unlocked it on the first try with my logon password.

I’m running 16.04 with full disk encryption. This was upgraded from 14.04, however the upgrade process had some bugs.

Verify that you have the latest updates for Ubuntu 16.04 before proceding

I have not had a chance to replicate the issue again and follow these steps on my own after I got this working again.

Not the answer you're looking for? Browse other questions tagged 16.04 keyrings gnome-keyring seahorse or ask your own question.

31
Where does Seahorse/GNOME keyring store its keyrings?
9
How can I disable GNOME keyring for svn?
12
Certificates -> Gnome2 Key Storage folder: cannot unlock
2
Automatically unlock other keyring than "Login" on login (not auto-login)
1
Passwords missing from Seahorse (Passwords and Keys)
23
How can import private key and certificate to seahorse in Ubuntu 18.04
2
Seahorse: Export and Import Keyrings as backup