I think everyone has known - we need to install katoolin to use Kali Linux Tools on Ubuntu. Before did anything I had looked through the internet and also found out these solutions: Can I install Kali tools on Ubuntu, How to Auto Install All Kali Linux

So here are my steps:

Then, to add Kali Linux repositories and update them, I selected option 1 from the katoolin Menu

Then, to view the available categories and install all available tools, I selected option 2 from the main menu of katoolin and then pressed 0.

But after that I got this: 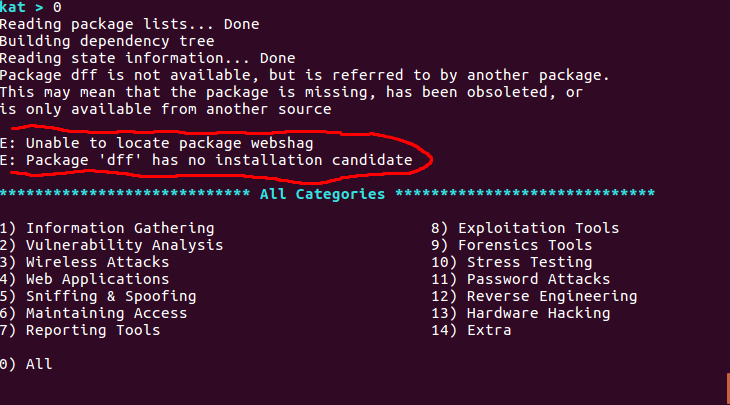 Does anyone know how to install Kali Linux tools in Ubuntu 16.04 in a proper way?

Katoolin is a collection of scripts for automating the installation of Kali linux tools in different platforms other than Kali linux, and installing Kali linux tools with Katoolin in other OSs or Windows Subsystem for Linux is always less secure than installing the same tools in Kali Linux. Kali Linux is named after the Hindu goddess of destruction which should give the user some indication that even Kali Linux itself is risky and difficult to manage, especially for new users.

Katoolin draws its tools from a variety of sources including apt and GitHub. Katoolin doesn't know anything about the platform that it is running on, so the safest way to use Katoolin is to install each tool the hard way one tool at a time, checking each time to see if that tool is included in the default Ubuntu repositories and if so installing it that way instead. When the installation is finished, the software sources that were added by Katoolin should be immediately disabled in order to prevent Katoolin from replacing packages that were installed from the default Ubuntu repositories with its own updated packages whenever Ubuntu software is updated.

When you go to View Categories and then enter 0 for all, the installer will immediately return to where you were. Scroll up, and you'll see that a number of the packages can't be found. Those packages are no longer maintained or have been removed from the Kali repositories. Even with this issue, you'll still find a lot of the Kali software available for installation.

So the best option is to install Kali linux tools in a series of distinct steps. Just like if you want to install Forensic tools on your system, then choose its option from the category and then type 0 to install all forensics tools. If this still doesn't work, then you have to install whatever forensic tools that can be installed one package at a time. 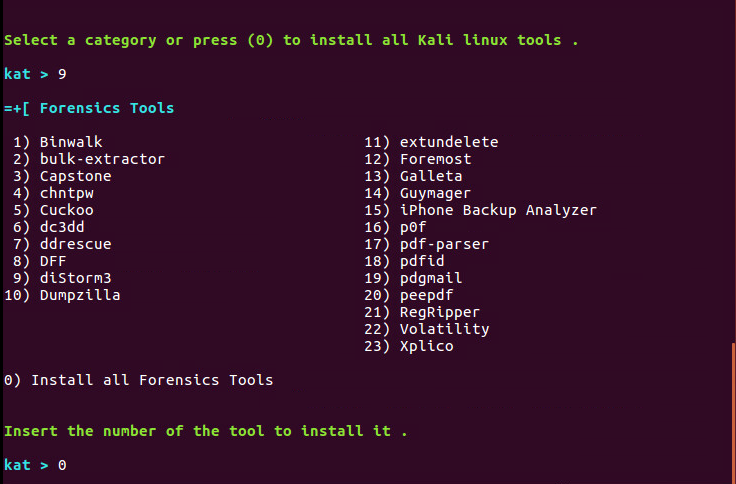 If you wish to go back to the main menu, type gohome in your katoolin interface. Now select the option 3 or 4 to install either the classicmenu indicator or the Kali menu. Press the y key to continue and then press Enter to start its setup.

Once you are done with installation of Kali tools using katoolin, you can quit by pressing the keyboard combination Ctrl+C and you will see the goodbye message.

Credit for the above text block goes to Kashif at How To Install Kali Linux Tools On Ubuntu 16 And CentOS 7 with my additions italicized.

Before updating your system, please remove all Kali-linux repositories to avoid any kind of problem.

After using katoolin and adding the repositories , its safe to run sudo apt-get update, but do not use apt-get upgrade if you do, your gnome and desktop will fail to start.

Install all the tools you want, after that do the cleaning by removing kali repos from your sources.list and apt-key.

If any error occurs, it comes from the sources.list, meaning the package or tool is not designed/available for your Linux architecture or katoolin itself has to be updated, because repositories were changed by the owner.

There is a step by step solution that avoids crashes here: Can I install Kali tools on Ubuntu?

In Ubuntu 16: edit file /usr/bin/katoolin and remove all references for the both packages: dff and webshag and save file.

Execute katoolin again - choose 1 and then 2 to update - after that type back and choose 2 and then type 0.

For me it still showed an error for usb-modeswitch for version 2.2.5+repack0-1ubuntu1, so I installed using this package from ubuntuupdates.org

After that I executed katoolin again - chose 1 and then 2 to update - after that type back and choose 2 and then 0 to begin installation.

Not the answer you're looking for? Browse other questions tagged 16.04 kali katoolin or ask your own question.

0
Katoolin error on Ubuntu 14.0.4
0
How to apply a nuke password for cryptsetup LUKS ubuntu 20.04?
0
Katoolin is giving a syntax error
0
Troubles with installing Katoolin
0
How to install Kali Linux tools in Ubuntu 16.04 LTS?
1
Trying to install Kali menu using katoolin but its showing you have unmet dependenies.How do I fix it?
0
Unable to locate package in katoolin
152
What is the difference between dpkg and aptitude/apt-get?
103
What does "Package <package> has no installation candidate" mean?
11
Can I install Kali tools on Ubuntu?
See more linked questions

2
How to install Kali linux tools in Ubuntu 15.10
2
How to choose to install all apps at once in katoolin/Kali linux repositories interface?
3
Is installing Kali Tools from Katoolin same as using Kali Linux itself?
5
How to stop Katoolin from crashing Ubuntu?
0
Katoolin tools borked spotify: how to uninstall?