After following the guide I found here I found that although my hardware is the same as its author I could not reproduce the same results. After creating the GRUB script to register the PCI registers during boot, making the file executable, and updating the GRUB config files (i.e., after following Step 3) I enter:

However, when I enter

it returns the expected value of 07 as is found in the guide.

What else should I do to ensure I can utilize the nVidia drivers on my setup?

I don't completely understand the guide, but have the same hardware and followed the same instructions.

I get the following:

These are more of my outputs when following said guide.

3. Create a GRUB script for setting the PCI-E registers during boot

Then enter the following:

Y for Yes to save config file.

Both of those commands execute fine.

Upon rebooting I run:

Let me know if I can provide more details to help me solve this issue.

I had previously (i.e., before attempting to follow the guide) deleted the "ubuntu" folder (and therefore it's corresponding grub settings) that is installed on the EFI partition while installing Ubuntu in order to get rEFInd to show up on start-up. I had thought that the two were competing since back then I would start the MacBook and it would automatically boot into Ubuntu without showing the rEFInd menu.

After uninstalling rEFInd, reinstalling Ubuntu, and setting the Grub menu as shown here I ran the steps in the Nvidia Driver guide. I got the correct output this time.

However, now when selecting the "NVIDIA legacy binary driver version 304.131 from nvidia-304 (proprietary)" from the GUI 'Additional Drivers' menu and applying changes it doesn't switch the selection out of the Nouveau setting.

Thinking it was a GUI glitch, I wait a while then rebooted anyway, but no dice -- the Nouveau driver is still used after start-up.

I'm wanting to be cautious in proceeding so what command lines should I input from here?

(Note: An additional frustration is that after this reinstallation process my WiFi is now not working properly despite proper drivers being used. This was not an issue before, but I'll deal with that after I can resolve the Nvidia drivers. Perhaps the wifi woes for 16.04 and Broadcom 432b are related to something with the boot loaders as well?)

Thanks for the help thus far.

I finally solved the problem when setpci doesn't change the value of PCI-E bridge.

If you are unable to set the value of PCI-E brigde register using setpci command in order to get nVidia GeForce drivers working on your Apple MacBook machine try these steps:

You will need the ID's of PCI Express Bridge and your display in format XX:XX.X

Your ID's can be different.

Our script will be slightly different than in mentioned post above.

I have noticed of two things. Grub2 installed using distro (mine is Centos) installation process doesn't contain setpci grub module. It's the reason why grub do not change registers while boot. Then It is necessary to load setpci module into grub before we run commands to change registers.

Ubuntu folder in /boot/EFI/ can be different on your machine depends how you named it in OS installation process, do not paste it. Replace it with correct path.

The file should contain these lines of code:

Do this command only on other distributions (not necessary on Ubuntu after update-grub):

3. Reboot your system and check registers

Reboot your machine and check if it's working. Replace ID's with yours again. Your terminal should finally show 08 (PCI-E bridge) and 07 (GPU).

After uninstalling rEFInd, reinstalling Ubuntu so that the "ubuntu" folder appears in the EFI partition (e.g., opening 'Terminal' on OS X, running sudo mountesp and then viewing the EFI partition in Finder), setting the Grub menu (as detailed here) and following the instructions in the original guide I was able to get the expected outputs of 08 and 07 before attempting to install the proprietary nVidia drivers.

When first attempting to install the proprietary nVidia drivers via the "Additional Software" GUI they would not install and upon reboot the open source Nouveau driver was being used.

This resulted in a successful start-up of Ubuntu 16.04 LTS on my MacBook Pro (7,1) in a dual-boot configuration (OS X 10.11.4 El Capitan) utilizing Grub as my boot loader. 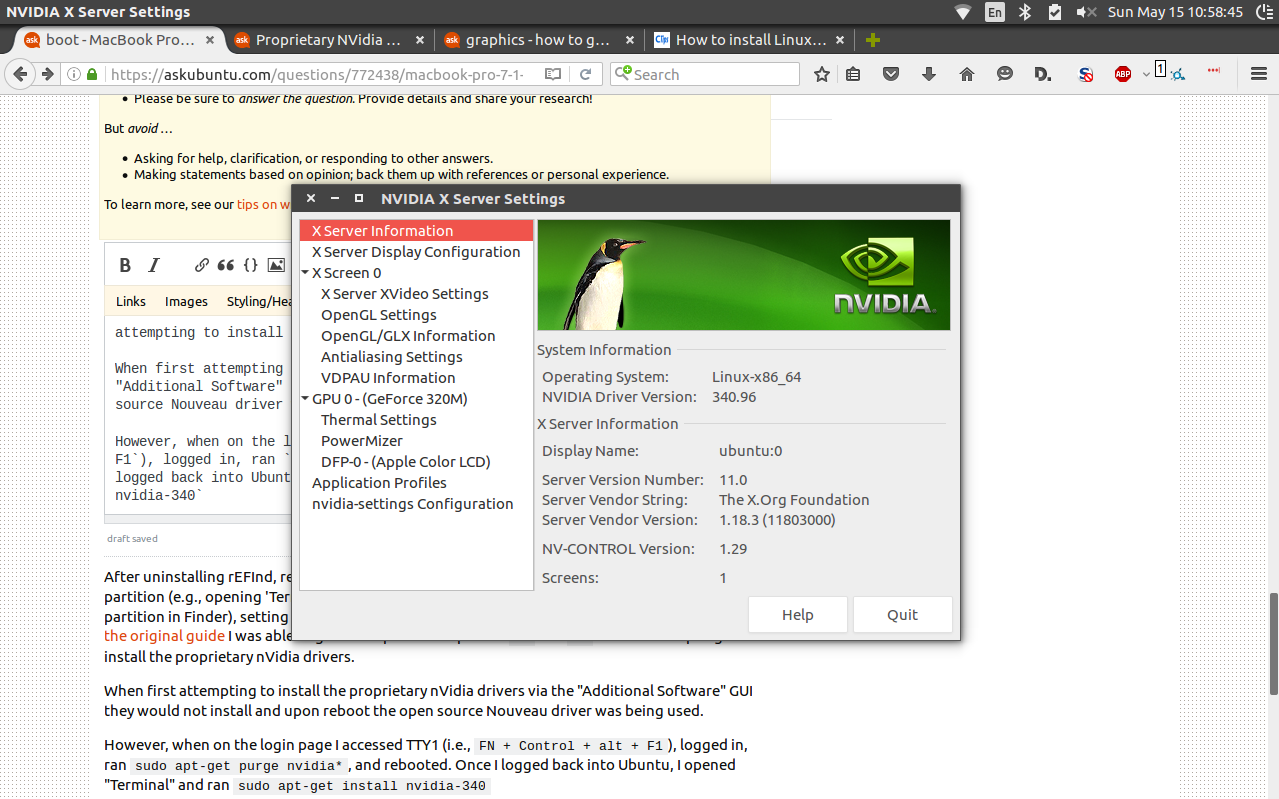 Thank you to the guides linked herein and @mikewhatever for helping me address this issue. Hopefully this will help others who may encounter similar issues.

On some Macs, this option causes rEFInd to tell the firmware that the specified version of OS X is being launched, even when another OS is selected. The effect is that the firmware may initialize hardware differently, which may have beneficial (or detrimental) results. If your Mac's video output isn't working normally, this option may help. On the other hand, keyboards and mice are known to sometimes stop functioning if this option is used, so you shouldn't use it unnecessarily. This option has no effect on non-Apple hardware. The default is to not use this feature.

Not the answer you're looking for? Browse other questions tagged dual-boot drivers nvidia macbook-pro refind or ask your own question.

13
Proprietary NVidia drivers with EFI on Mac, to prevent overheating
7
Where can I find the refind.conf configuration file?
2
setpci doesn't change the register value for the bridge device (NVIDIA driver black screen issue)