This has happened for as long as I can remember. Nautilus/Caja shows a shared icon on the folders, and they are accessible from Windows by typing in their folder name, but they don't show up in the list of folders.

Other folders do show up in the list, even though there's nothing different about the Sharing Options in Nautilus.

If I change the shared name, they show up. If I change it back, they disappear again.

I installed Ubuntu fresh on a new computer, shared two folders with caja-share with the same settings, and I can access one but not the other. Both have the same owner, group, and permissions:

the one that works is in /home, the other is on /mnt, so that's probably the reason? 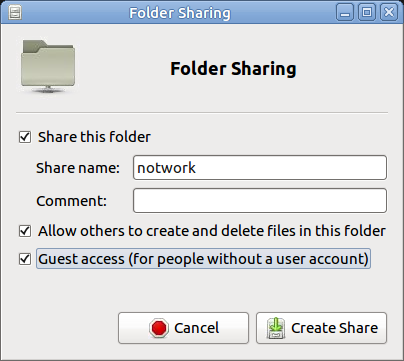 So the only difference is the path, as alluded to but not really explained in Here's my smb.conf file. Whats wrong with it?.

Mounting drivepool under my home folder doesn't fix it, either. So it's not the path itself but something to do with being inside the mount, which is mergerfs.

I am sharing the files using caja-share (mate-file-manager-share) under MATE desktop environment, Ubuntu 16.04.1 LTS, but it also has the standard Ubuntu environment installed.

A clue! I found that Samba has log files for each machine that connects to it.

There is such a directory, of course:

3
Here's my smb.conf file. Whats wrong with it?