Ubuntu 16.04 does not start after Gnome shell installation

I'm relatively new to Linux, have been using it for about 6 months already. I like Gnome shell more than Unity but looks like in 16.04 Ubuntu plays a trick on me. As soon as I install gnome Ubuntu gets stuck on loading.

Basically I did the following:

Installation process is done and then I do:

Regardless if I do the

First it still ends up with the same result. Also it does not matter if I really switch to gnome or not before I do reboot. The only thing I can do after installing gnome and rebooting is basically booting with GRUB and logging into the system via safe mode and removing the gnome shell. As soon as done the system loads perfectly fine as it's supposed to.

Anyway this has not been a problem for me in the 14.04 at all and I was unable to google any good solutions so far.

I run Ubuntu on Dell Inspiron 5558 laptop, if that's of any help at all. And also I do use proprietary Nvidia drivers (361.42) instead of default nuoveau drivers.

Press Ctrl+Alt+F1 when it hangs to start text-mode. Type in your username and password to login.

From there, you need to enable lightdm or gdm, depending on what gnome is configured to:

Try by selecting lightdm instead of gdm when installing gnome-shell. That worked for me.

You can uninstall gnome-shell and re-install it to be able to choose it again.

To get a root console, enter in recovery mode by pressing Shift key on GRUB booting time.

Disclaimer: this is NOT an answer, I'm just sharing the workaround I've used

After 5 versions of Ubuntu run on Gnome Shell (without a single problem), the update to 16.04 has broken it completely.

In my case, logging in with Gnome Shell lead to a screen where the only two things working were the hot corner and the highlighting of the Desktop icons.

After the first click (on the top bar, on the side bar, on an icon, everywhere) it did get stuck and needed a hard reset.

Meanwhile that the problem get fixed, the workaround to use is simpler than the one you're describing (if I got it right): in the login page, switch from GnomeShell to standard Ubuntu by clicking the circular icon: 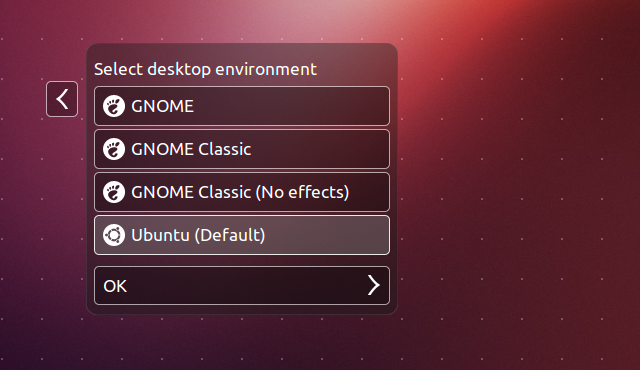 This way everything will work perfectly (but you'll miss the hot corner as hell).

Not the answer you're looking for? Browse other questions tagged boot unity gnome 16.04 or ask your own question.