How does FDE (Full Disk Encryption) work so quickly?

I'm curious about how does Ubuntu's full disk encryption works under the hood. Here's an example:

Considering the following string as all the disk's content:

After applying some kind of encryption method it would look something like this:
(I've used Caesar cipher with an shift of +1 for this example, e. g. A → B; B→C...)

As I understand, when the computer is turned off, the drive's content would be the string above. But when it's turned back on, Ubuntu needs its content to be back again hello world in order to successfully boot.

What I don't really get is that in the real world the disk's content is way much more, and the encryption algorithm way more complex, and I find it difficult for the computer to completely encrypt/decrypt all of it in just a few seconds (it doesn't take longer to boot or to shut down).

How is this possible?

How does AES / Rijndael Encryption in general work?

This page has a fun A Stick Figure Guide to the Advanced Encryption Standard (AES) that looks easy to understand, though it looks to be 50+ images, for example these two: 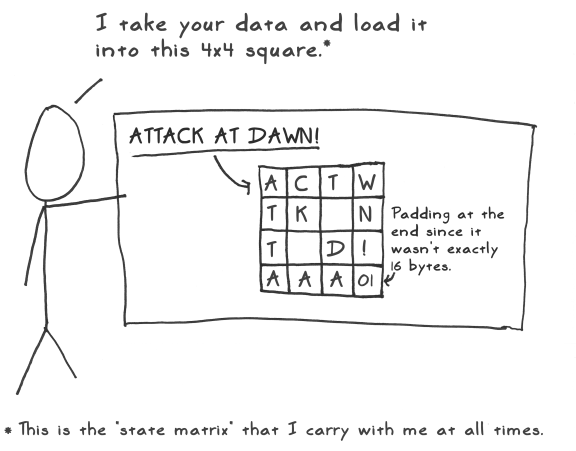 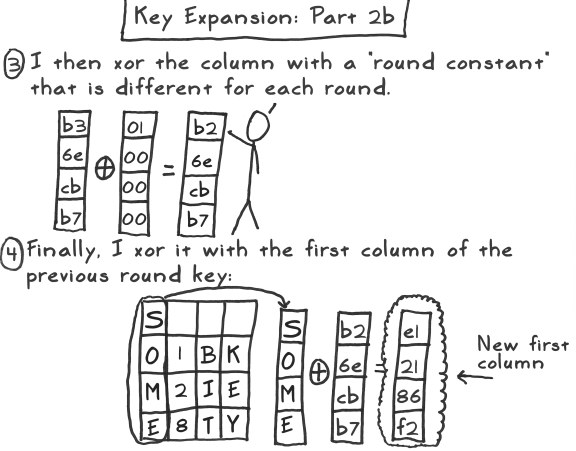 It's far too much to duplicate it all here, but if you have to have an all-in-one image it's this one: 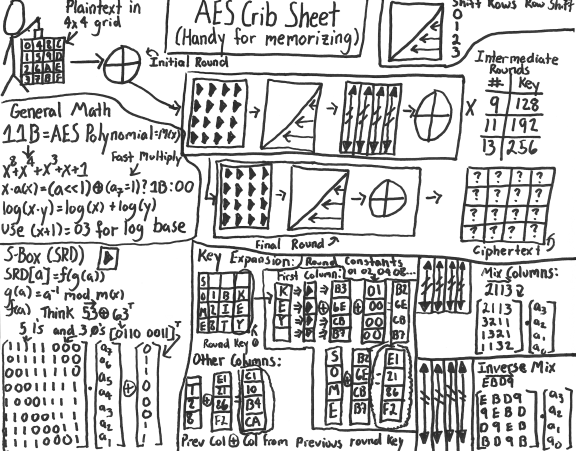 Or, there's a more compact explanation at http://www.password-depot.com/know-how/blowfish_and_rijndael.htm

The Rijndael encryption method is based on replacing, changing and performing xor operations on bytes. The method looks like this:

The security level of this encryption method increases if Rijndael is performed several times with different subkeys.

I believe it works by encrypting a partition with LUKS (default settings with AES), and then puts some volumes on it with LVM (like /, swap), and decrypts and mounts them at boot after you enter a passphrase. And there is a regular (not encrypted) boot partition that boots enough to ask for the passphrase.

the_simple_computer's Guide to Full Disk Encryption with Ubuntu (Updated June 28, 2015) says that's about how the default installer's encryption works, and mentions that dual-booting wouldn't work (at least not out-of-the-box), the drive must use MBR so "if your computer has UEFI, the distro will be installed in legacy BIOS mode so you can't use Secure Boot" and "also gives you a swap size equal to that of your system RAM (often unnecessary) and you have no choice over what kind of encryption is used."

How fast is encryption?

If you run cryptsetup benchmark it will run tests and tell you about how fast the encryption alone takes, watch for the (currently) default aes-xts lines:

An average hard drive read speed could be 80-160 MB/s, so you won't be much longer than a regular read, and it's possible that the just-read sectors have already been decrypted while you're still be waiting for the hard drive to read more.

An SSD could possibly be faster, maybe 200-550MB/s, so you might notice it. But, random reads could be slower, and I've read that SSD speeds can slow down after use (maybe when the drive fills up completely and it has to start "erasing" sectors?)

How can the computer completely encrypt/decrypt all of the drive in just a few seconds (it doesn't take longer to boot or to shut down)?

It doesn't have to decrypt everything first. The encryption (LUKS) works on blocks of data, can randomly decrypt any block, and acts like a layer between the drive's encrypted data and what the filesystem sees.

The data on the hard drive is always encrypted, so there's nothing to do at shutdown except forget the key.

This will be a bit of a simplification, but I'll try to go through the process of accessing a file on an encrypted filesystem.

For example, let's say a the beginning of the encrypted filesystem there's a file table; let's say we want to read /foo.bar. So, the first thing we do is read the beginning of the partition, decrypt it, and look through it for the file we want; let's say it says the file starts at 0x10000000 bytes. So to read, we start reading from the disk at that location and decrypting it; similarly, to write, we can encrypt the new contents, and write them at that new location.

Hopefully this helps clear up any confusion on the process.

The processor uses dedicated instruction set. It is possible because of it, AES-NI. It enables fast encryption and decryption or you can say it cuts the overhead. It is fast because it is hardware implementation, as explained here.

You can check about performance impacts here and they are worth it for added security.

Modern computers can do billions of operations per second, so it doesn't surprise me that encryption and decryption are fast.

This is how I would intuitively rank how fast computers are at doing things:

So intuitively, I am not surprised that full disk encryption does not have much of an impact on performance, since I imagine the bottle-neck to be the disk.

Of course, these intuitions don't always match reality. For instance, in reality, there have been cases where full-disk encryption has caused a noticeable performance hit. But usually these are solved after the developers go through a few rounds of developing optimisations.

Not the answer you're looking for? Browse other questions tagged security encryption dmcrypt or ask your own question.