Why did Canonical drop support for Gimp and how to recover from it? 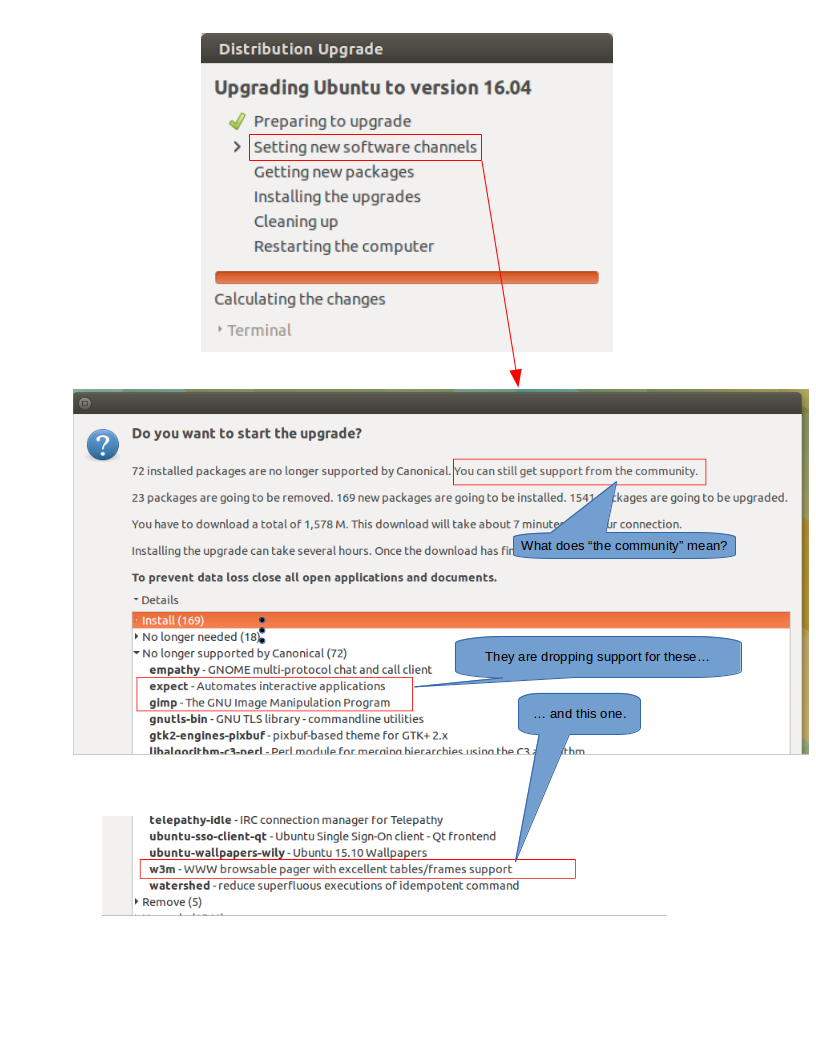 I can kinda see why Expect and w3m are being dropped, but why Gimp?

More importantly, how to do I find pre-built packages that I can install via apt-get or the Ubuntu Software Center (but they are dropping the "Center" part of that).

What does "the community" mean?

That GIMP is no longer supported by Canonical doesn't mean it won't be available in Ubuntu's repositories. It will be, but not in the main section, instead, in the universe section.

From the package index:

"The community" is anyone not paid by Canonical to work on Ubuntu: the army of volunteers who work on Ubuntu (basically most people who contribute to the development of Ubuntu).

Software in main is either software that's shipped on Ubuntu's official released ISOs, or crucial software that Canonical developers feel they can or should support for the duration of the release (5 years for LTS). GIMP was dropped from Ubuntu's ISOs in 10.04, and I'm amazed it remained in main for 6 years after that. Probably whoever maintained it in Canonical moved on to other projects.

The ubuntu repositories are split into four parts.

Software not in main is not supported by canonical. The main practical impact of this for those of us who don't buy support contracts is that security updates are much less likely to appear in a timely manner and towards the end of the release lifecycle may not appear at all.

In general stuff gets into main because it's part of one of Ubuntus default installs. Gimp was dropped from the default install some time ago and I guess they just finally got around to removing it from main too.

Does that matter? In general I would say no, an image editor typically has relatively low exposure to security threats. Especially as the image formats themselves are typically handled by external libraries which (at least for the common formats) will probablly still be in main.

So to answer your "how to recover from it" question in the title I would suggest you just don't worry about it.

Not the answer you're looking for? Browse other questions tagged gimp release-management or ask your own question.

232
How do I enable the "Universe" repository?
108
What's the difference between multiverse, universe, restricted and main?
55
How can I contribute to Ubuntu?

8
Why doesn't GIMP support CMYK?
18
Why did Canonical reduce Ubuntu's (non-LTS) support time to 9 months?
20
How to add a drop shadow effect in Gimp?
8
How do I recover unsaved files in Gimp?
14
How to install separate+ gimp-plugin for cmyk support?
0
Install error for GIMP 2.8 repository in Ubuntu 12.04
1
Gimp: How to change layer effects once added? For example change drop shadow values
1
GIMP 2.10 Drop Shadow are in separate layer - how to achieve like in GIMP 2.8