When I opened its software store, I found that it's not showing the apps I installed in Ubuntu 15.10 like Clementine, Gdebi package installer or synaptic package manager, dconf, acetoneiso etc.

I need these applications. How can I install them?

Ubuntu Software and Synaptic are the top two software apps in Ubuntu 18.04 and they complement each other in functionality.

It should be noted that because software can be installed from both of these two GUI applications, only one of the following two applications should be opened and used to install software at the same time.

Search in Debian Package Search can be done by:

Additionally a lot of information about the packages is displayed, including the files belonging to them.

The new software center was a mess for the first couple of hours, and this faulty version doesn't seem to refresh itself while it keeps running in the background even after you've closed the window.

You can force quit it by invoking

I have experienced the same problem. Until it is fixed, I suggest using Synaptic package manager. All the packages are available there and it works very well.

(it is safe to skip a step if already installed)

Search for your package (application) by name and right click and mark for install. Then click apply. You can uninstall by the same method.

If the method above doesn't work you can try this:

First, open the terminal and type this:

You will get a result in a table form, we are interested in the apt requests that contain the words http or software in them.

Once you find it, look at the second column. For example this is how it might look like:

The results you get will be similar, but not exactly the same.

Now, we want the second column for the above result: that's 2514 for me. Add it here (put the number you just got instead of 2514)

Repeat the commands until you get no more unnecessary requests (chances are you will have to do it only once).

Now start the ubuntu software and it should work!

Removing unused dependency packages solved this problem for me.

I hope it works as well for you as it did for me. Unfortunately I have no idea which package caused this problem.

Solution (Open software center from terminal instead of clicking on the icon): 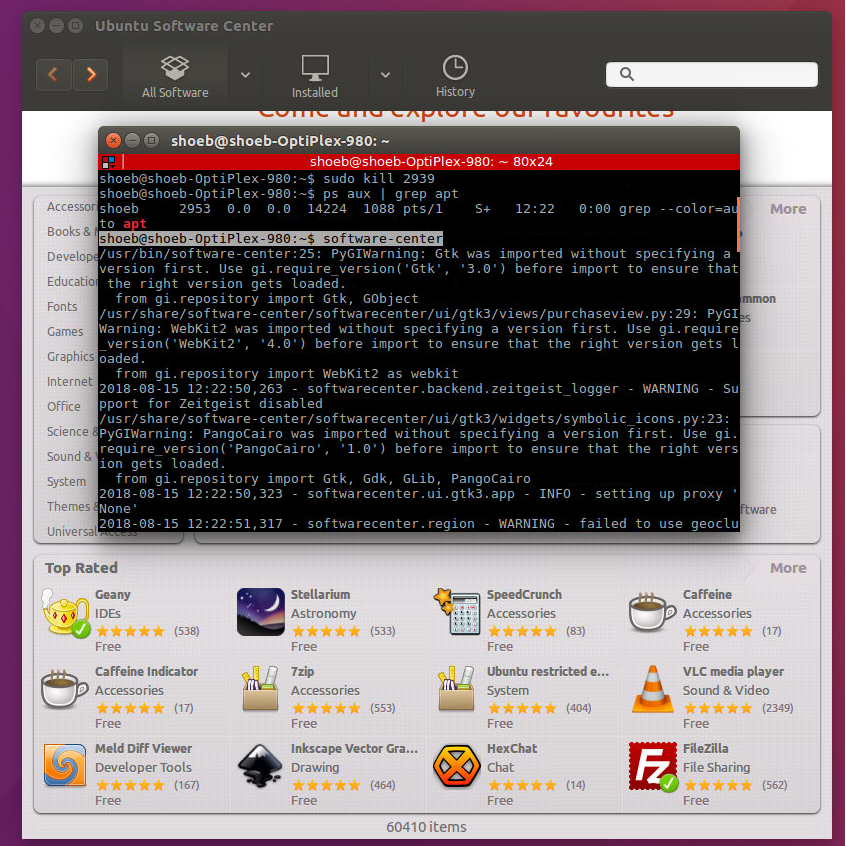 Not the answer you're looking for? Browse other questions tagged software-center or ask your own question.