All windows opens on left monitor and all new files gets saved there, I want my right monitor as my primary monitor so all this happens there.

As the picture below shows I have set the launcher on my right monitor but that doesn't help with my problem. 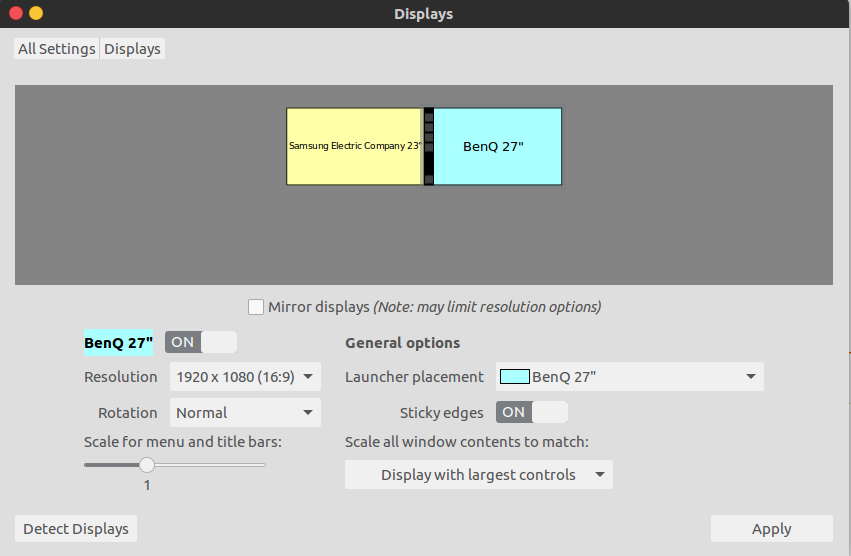 I had this same problem, as well as several other problems related to having multiple monitors.

It turns out this is an open unsolved bug for Ubuntu; meaning the solution link posted in the above comment does not actually contain a solution that fully works. See open bug report here: https://bugs.launchpad.net/ubuntu/+source/xorg-server/+bug/1425000

Fortunately I spent a bunch of time figuring out how to configure this as well as the orientation of the login screens but that's explained in a different thread (I have four monitors and login orientation was wrong but it's all sorted now, if you also have this issue see solution here: Where does Unity/Unity-Greeter Load X Configuration From?)

1) First, you will want to install arandr to easily find your monitor display names, run this in a shell:

2) Next, run the arandr command and look at it's user interface that loads (it will probably load on the wrong screen since you haven't configured anything yet).

3) Now, take note of which display (the names should be something like HDMI-# for hdmi or DP-# for display port, DVI-I-# for digital video, etc). The label should be big and obvious once you run arandr. You can either write down the display name, or just keep arnadr window open, so you can see it, and launch a new shell if you need to for the next part. My default display is called DP-4 used in the next example, but undoubtedly yours will be different so take note for the next step.

5) Now, from within the Startup Applications tool, click the "Add" button and add a new program to run upon logging in. A window will pop up asking you what to run, here is what to type:

Reboot to fully test it worked and that should do the trick. If you aren't sure if the command will work and want to test it first, you can run xrandr --output DP-4 --primary (again, replace DP-4 with your default monitor) from a shell then launch a window and see if it shows up on the correct default monitor. But in order to have this save and work each time, to work around the bug, you need to add that command to Startup Applications.

1) In a shell, first backup your existing monitors.xml file so you can restore it if something unexpected goes wrong during the editing process:

2) Open monitors.xml in gedit to change the config settings tags:

3) Now, inside of the gedit editor window, find the output tag labeled for the monitor you want to be primary, then under that <output> block, change the <primary> tag to yes. Be sure to look at all other monitors and change the primary tag for all the other monitors to no.

For me, doing these two things has solved the problem in all cases I've encountered so far.

The issue was that my config was saving my display settings through the default display program, though not applying the "Primary" setting correctly on bootup.

I have my Laptop on the right and main screen on the left, I have the left monitor configured as primary.

On bootup, it was displaying the top tool bar on the right, whilst the os (mouse) thought it was on the left, hence to use the top tool bar, I had to blindly navigate (estimate) to where the menuitems were by looking on the right screen and using my mouse on the left. I could overcome this by changing the rotation on atleast one screen, applying the settings, then putting them back again. The top tool bar would then correctly be set to my primary (Left) screen.

The process below now does this for me automatically (many thanks to etron's post) :

Note: If you aren't sure if the command will work and want to test it first, you can run the script manually i.e. in my case I would run this ~/.screenlayout/ScreenLayout.sh in a shell. Also, if you would prefer to use keybindings to set multiple configuration, I believe you can do this within arandr, though it requires Metacity, which I haven't investigated so you're on your own here.

In addition to etron's answer - that didn't work for me, my secondary screen (HDMI1) which is on the left, still would act as if it was to the right of the primary (HDMI2) after a reboot, even though it was all correct in my monitors.xml. What worked for me was as etron describes, but I put the following command in my startup applications instead:

You can also try switching off and on the currently main monitor in the display configuration, as indicated here: Is there any ability to set my primary monitor?

78
Is there any ability to set my primary monitor?
39
Change Primary monitor
7
How can I switch monitors with a shortcut?
4
Where does Unity/Unity-Greeter Load X Configuration From?
0
Ubuntu 16.04 won't boot anymore after installing amdgpu driver/software