I have written an install script which automates my install process. Afterwards I would like it to rearrange/add/remove the icons to the unity launcher.

Using dconf watch / I can see output as I reorder the icons. Is there a command line way to do this - possibly with gsettings?

The simple script bellow allows taking a file as argument and sets the launcher to have whatever shortcuts to programs appear in the file (one per line).

Basic idea is that the launcher icons are actually links to .desktop files (wherever they may appear) , and canonical method to set the launcher items is to run the following command:

This can get tedious if you want to add many items and quoting can become a pain. One can always open a desired program and right click on the icon to invoke the "Lock to launcher" option, but that also is not practical when you're dealing with large amount of items.

The approach taken here is to simply read a file, with 1 time per line, build up the command text , and execute it. This is no different from running the gsettings set command above, except that the hard work is done for you.

To run the script , save it to a file, make it executable with chmod +x /path/to/script and run as

The input file should contain full path to the items you want added to the launcher, such as /usr/share/applications/firefox.desktop , but it's not necessary , a line with firefox.desktop is OK too.

Before running the script 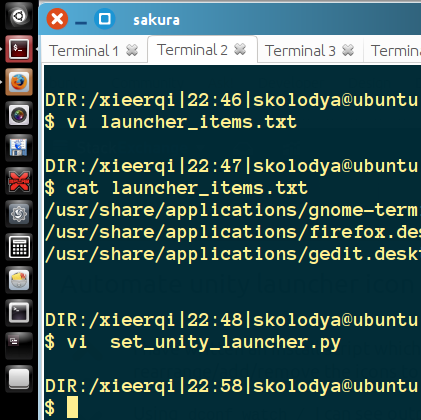 After running the script 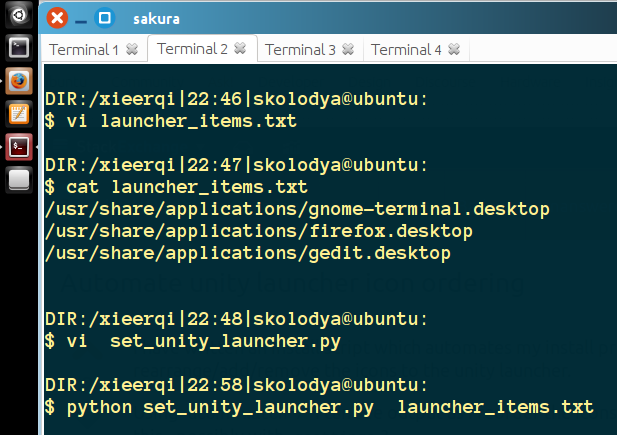 13
16.04 IntelliJ IDEA Desktop Entry not working
8
What happens internally when I click "Lock to launcher" in Unity?
2
Ubuntu 16.04: How do I add/remove pinned apps to Unity Launcher via terminal?
3
Adding a program to the launcher with a script
2
Copy the Unity launcher from one user to all users