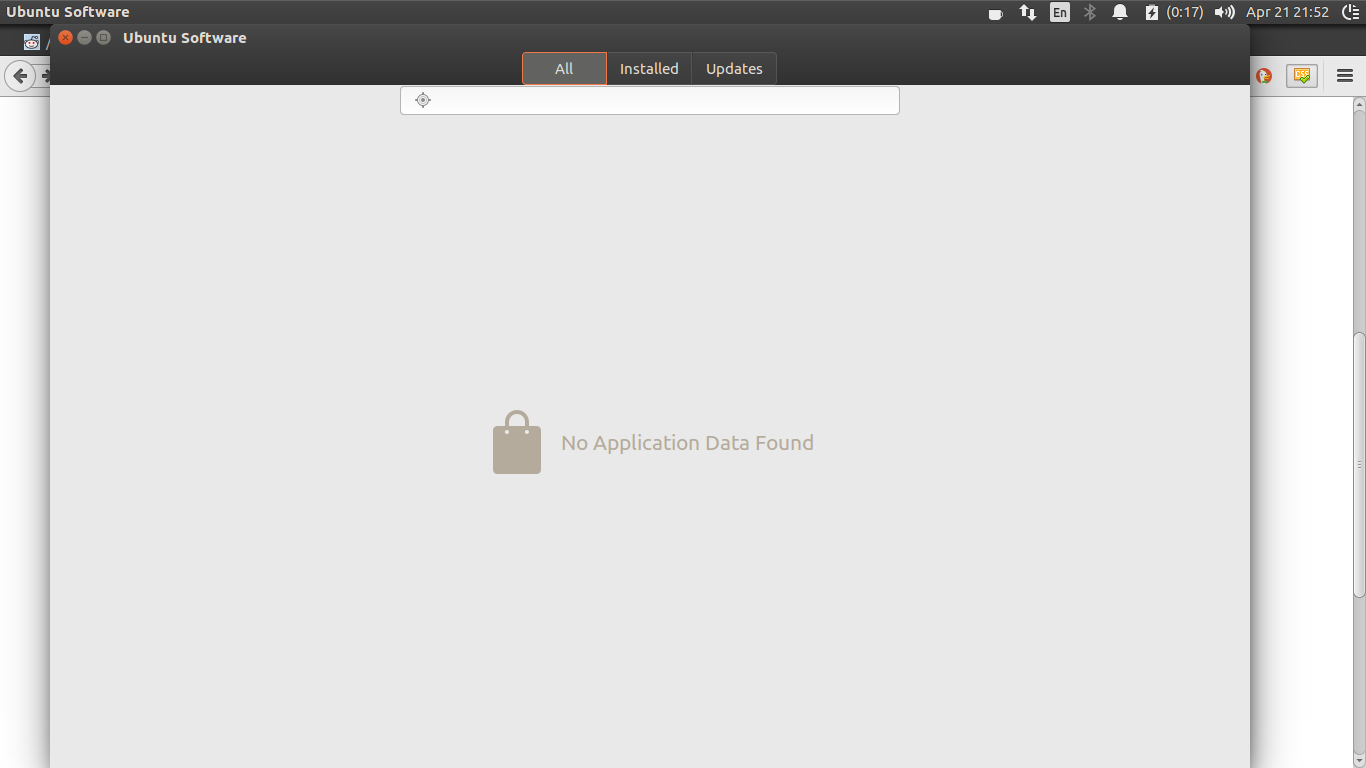 This is the error I get when I open the software center. I've tried rebooting and running sudo apt-get update but I see no improvement. It worked earlier but I don't know what went wrong since then. I'm using Ubuntu 16.04 final release on a Dell Inspiron 15R. Any advice will be appreciated. Thanks in advance.

EDIT: The problem magically solved itself without me doing anything special (or maybe inadvertently doing something, I don't know). So I'd still like to get to the root of this.

Just had this problem after using bleachbit to cleanup the system on moving from the beta to the official release. Cleaning out all the cache data also blanked out the software center (re:user533424 above).

It seems to "magically" reappear by anything that regenerates this data. So...

settings>region languages> ... and changing or reinstalling your current language

Everything will be back to normal 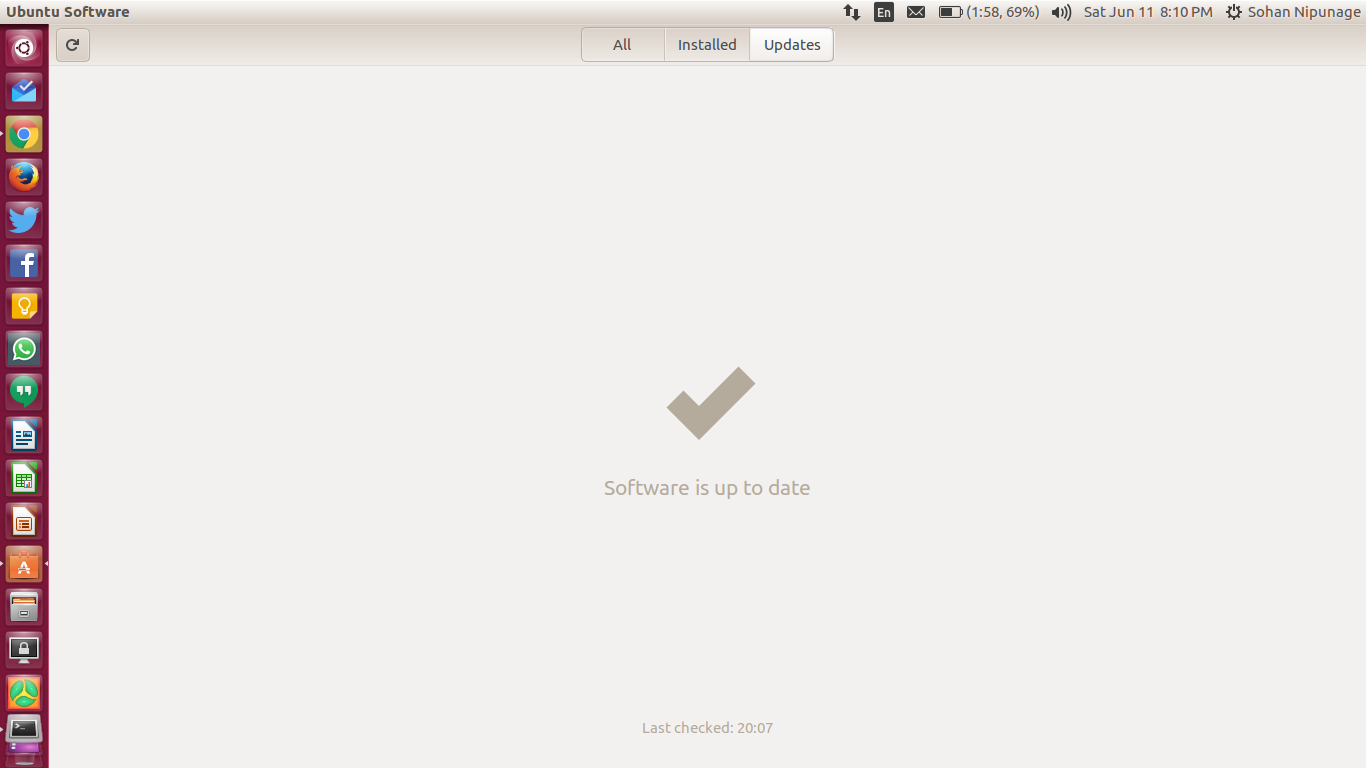 I think this has to do with the /var/cache directory, at least that is what I suspect based on my own experience.

Workaround that worked for me:

Yes, it seems to be a language configuration issue. Ridiculously impossible out-of-the-box glitch, yet there it is in an LTS release. :\

Even if your system is in English already, re-select it in System Settings > Language Support, re-apply system-wide, and reboot. Now the new app store actually functions.

I had the same problem. But my problem was not rooted in language setting or anything related to that. My problem was cuased by a program called GoGui; a game of go interface program that can connect to different engines. I found solution to my problem through launchapad post: https://bugs.launchpad.net/ubuntu/+source/gnome-software/+bug/1563155 #28 and #29. So basically the problem was the gogui registers file types of *.xml to x-go+xml which I guess Ubuntu Software tries to open with but can not be found. Deleting /var/cache/app-info/xmls/fwupd.xml and unregistering the the created lines by Gogui in /usr/local/share/mime/globs and /usr/local/share/mime/globs2 solved the problem for me!

I got my software center working by changing the language into English. But I can see yours is already in English, so that will probably not help you...

I started while installing synaptic-package-manager. Multiple events started appearing, but actual installation did not start. I used bleachbit (as root) a few times, as the installation was on and using sudo apt-get update for every app installation. Unchecked the deletion of apt files from bleachbit. I managed to install synaptic package manager from command line after reboot using sudo apt-get install syanptic-package-manager. Used it to reinstall ubuntu-software. Now the all applications are listed.

This problem is pretty annoying and tends to plague me sometimes. But what seems to work is killing the application from the terminal.

Then restart Software and hope for the best.

the Ubuntu Software Center on my PC is also showing "No application data found" but that appeared right after I was mounting /var/cache as tmpfs. I've experienced this issue with previous versions of the Ubuntu Software Center as well and therefore decided not to use a tmpfs for /var/cache any longer but I also couldn't figure out how to restore those files... Anyhow as per definition /var/cache is intended for cached data from applications. Such data is locally generated as a result of time-consuming I/O or calculation. The application must be able to regenerate or restore the data. Unlike /var/spool, the cached files can be deleted without data loss. The data must remain valid between invocations of the application and rebooting the system.

Files located under /var/cache may be expired in an application specific manner, by the system administrator, or both. The application must always be able to recover from manual deletion of these files (generally because of a disk space shortage). No other requirements are made on the data format of the cache directories. see http://www.pathname.com/fhs/pub/fhs-2.3.html#THEVARHIERARCHY

Which, in this specific case is not true, since the Ubuntu Software Center won't be working correctly after deleting those files.

Hope that's a good hint for the root cause but may not solve the issue.

user533424user533424
1
2
Add a comment  |
Highly active question. Earn 10 reputation (not counting the association bonus) in order to answer this question. The reputation requirement helps protect this question from spam and non-answer activity.

Not the answer you're looking for? Browse other questions tagged software-installation software-center software-sources 16.04 or ask your own question.

5
Ubuntu Software Center crashes due to error in its Python code
2
Can't install anything from the terminal of software center in 15.04
0
Overheating on Ubuntu 16, dual graphic card Intel - ATI